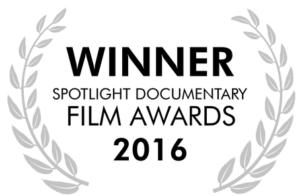 A Platinum Award celebrates truly remarkable films that have earned the highest scores from the Spotlight judging panel.