Last Friday, 11 Paraguayan farmers accused of the Curuguaty Massacre were sentenced to between 4 and 30 years in prison in a case repeatedly condemned as biased and irregular.

Opinion piece written by Luis Lezcano Claude, former member of the Supreme Court of Paraguay, now acting as defense for the farmers on trial.

The so-called “Curuguaty Massacre” occurred on June the 15th 2012, near the city of Curuguaty, 150 miles northwest of Asuncion, the capital of Paraguay. Poor farmers struggling for their right to land access were camping on land owned by the State of Paraguay.

Campos Morumbi, a company owned by Blas Riquelme, one of the largest corporate farmers and businessmen linked to the dictator Stroessner during his entire regime, claimed rights over the adjoining lands. By means of influence trafficking and manipulated court procedures, it achieved recognition of their right to the land, even if the case is still open. 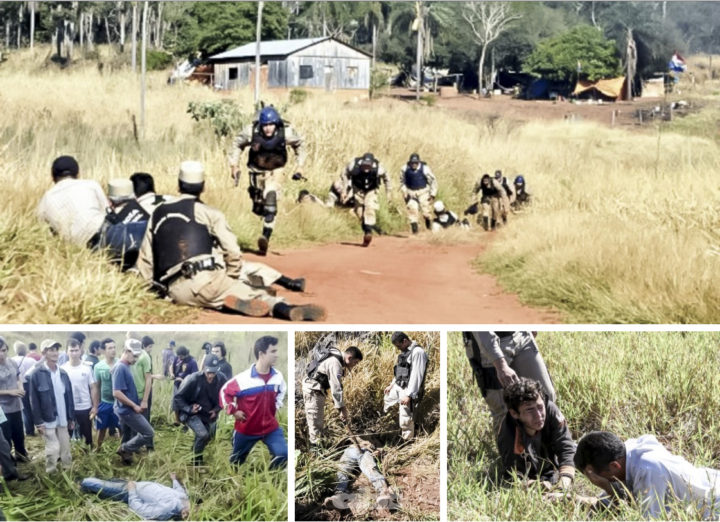 That morning, more than 300 agents of the National Police were supposed to perform an indefinite action to break-in and evict the farmers. According to information provided by the police themselves, in the campsite where the officers were to go, there were around 60 farmers. Actions degenerated into a shootout in which 17 people were killed: 6 policemen and 11 workers.

The dead and wounded had gunshot wounds of a gauge corresponding to the automatic and semi-automatic weaponry employed by the police. The incident was also used as a justification for the impeachment of President Fernando Lugo, even though until now, his moral responsibility has not been brought into discussion.

The oral trial began in Asuncion, approximately a year ago, and next monday the court’s ruling will be known. 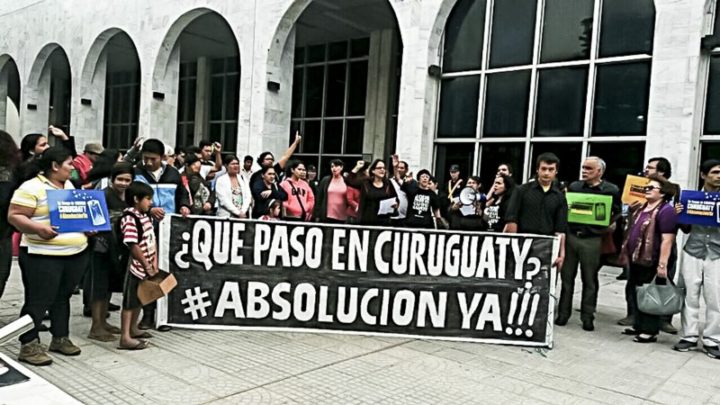 The role of the Interior Ministry in the massacre was riddled with irregularities. Clear proof of the total lack of objectivity from the attorneys involved is the fact that the current investigation is only dealing with the deaths of the six policemen. Nothing has been done regarding the deaths of the 11 farmers. The whole trial has revolved around determining responsibilities for only those deaths. 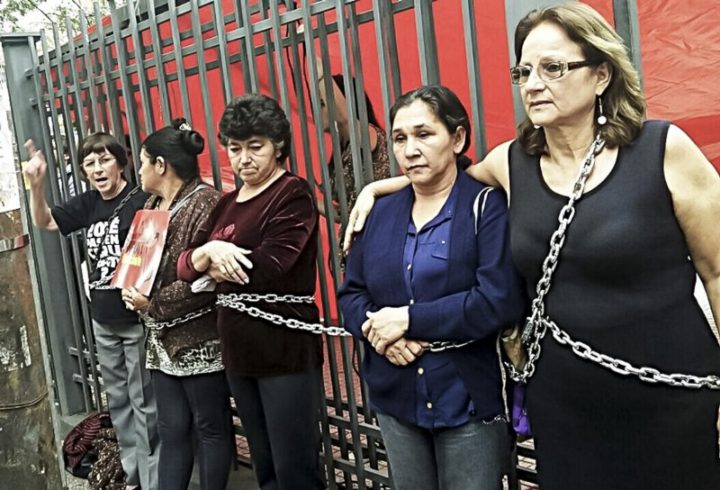 Evidence has been hidden or reported missing. Other procedures, such as autopsies, were poorly performed. The Interior Ministry sought, at any cost, to implicate suspects in order to have the case closed, assuming that the press and public opinion wouldn’t give the case much attention, as it only concerned poor farmers. 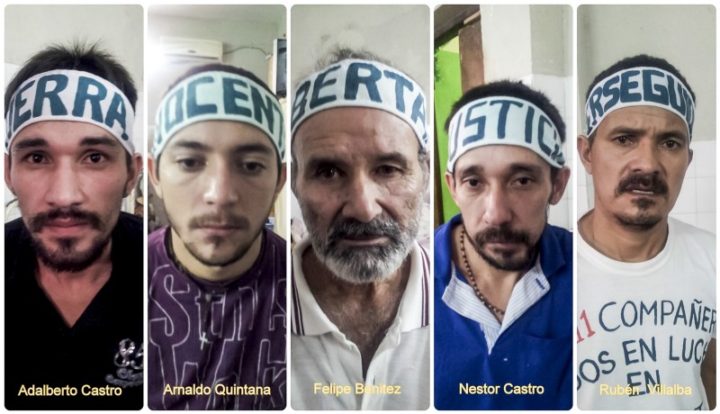 Five of the 12 farmers that have been locked up more than 4 years. Photography: CigarraPy

A group of 12 farmers were accused of “criminal association”, (when they were in negotiations with the state body — the National Institute of Land and Rural Development [INDERT is its spanish acronym]— attempting to legalise the occupation of the land), of “trespassing”, (when the State had not made any previous claims), and of “attempted homicide” (even though there were 17 deceased), subsequently changed to “intentional homicide” for several of the accused, without any of them having had the chance to properly defend themselves.

In reality, the underlying question here is the farmers’ struggle for land access to be able to achieve a dignified life. The real agenda behind this trial is to indefinitely block the farmers’ legitimate aspirations and to maintain the privileges of one tiny part of the ruling classes: the corporate landowners. 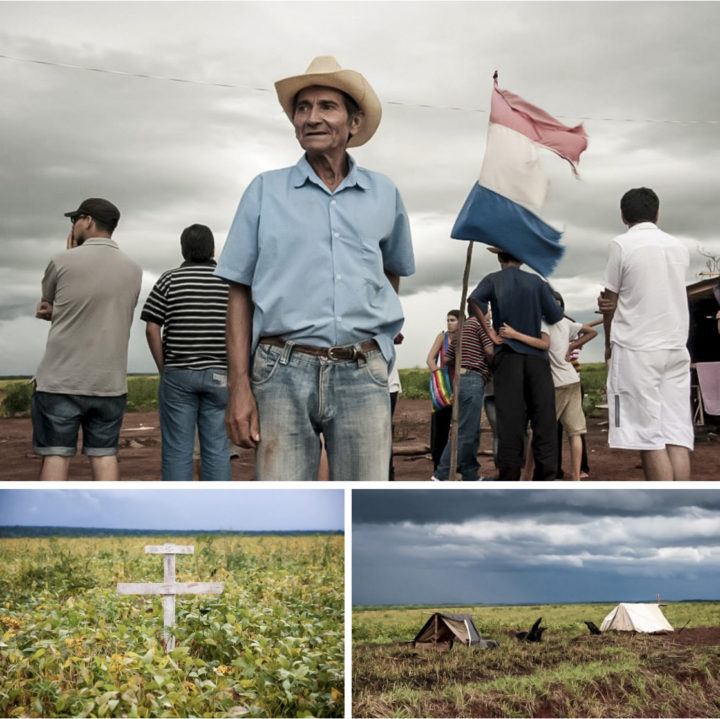 The Paraguayan legal system has not yet decided the fate of the Marina Kue property, where the Curutuagy Massacre took place. Photography: CigarraPy

The Public Ministry has shown draconian zeal by asking for 5 to 30 years in prison sentences. Social struggle is being criminalized and punishments are being given that serve as a lesson to those involved and as an example to future possible “criminals”, not so much to disuade them from attempting murder, but rather from attacking the concentration of land. 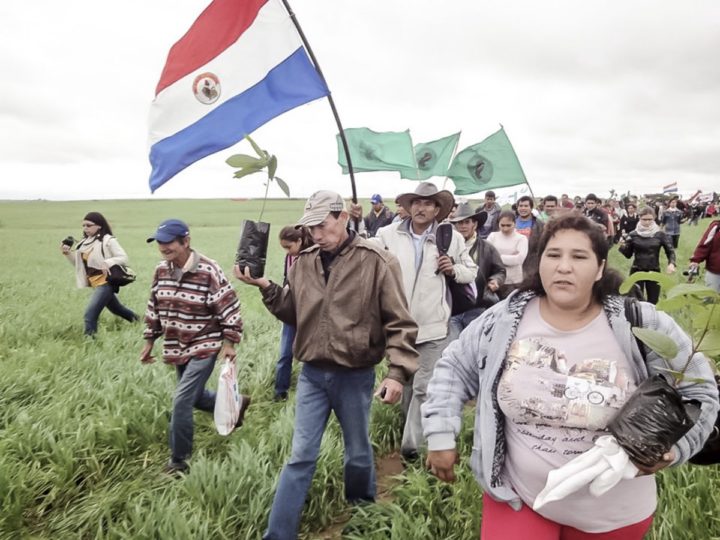 The Farmers’ organization is still claiming that the lands being used by a corporate agrobusiness are state property. Photography: CigarraPy

State bodies, such as the National Police and the Interior Ministry have been used to persecute these ends. There is a latent hope that the Justice Department — represented by the Courts —will not fall in this maneuvering. The dilemma is between carrying out justice by acquitting all those accused, or condemning a few scapegoats with the sole purpose of having the case dismissed.

Special thanks to CigarraPy for the photographic documentation provided.