Londoners met yesterday May 14 to form a Peace Sign in Trafalgar Square and hear calls for Peace and Nonviolence from a number of organisations.

Here is the speech I gave representing World without Wars and Violence as well as Pressenza. 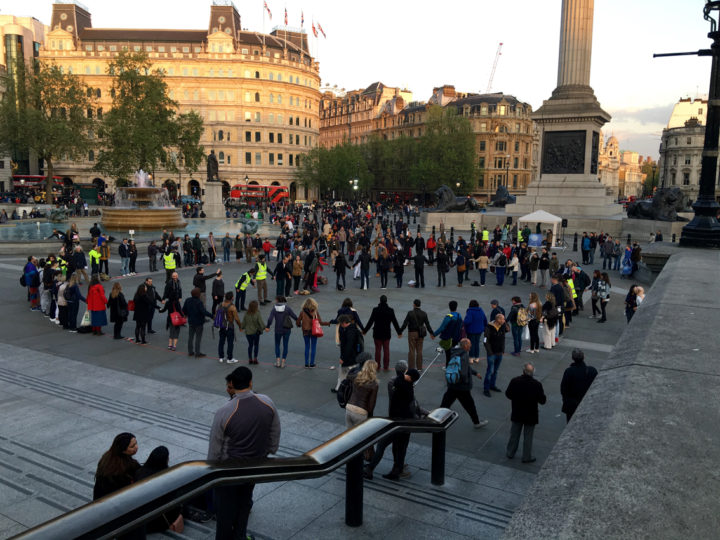 Hello. I’m here to talk about peace and nonviolence. I am a member of World without Wars and without Violence which inspired and organised the World March for Peace and Nonviolence, that went round the whole world in three months in 2009-10.

It was joined by three thousand other organisations many of which continue working in the places touched by the March to achieve reconciliation between factions in conflict and to establish non-violent movements that are today working for change, to eliminate all forms of violence. 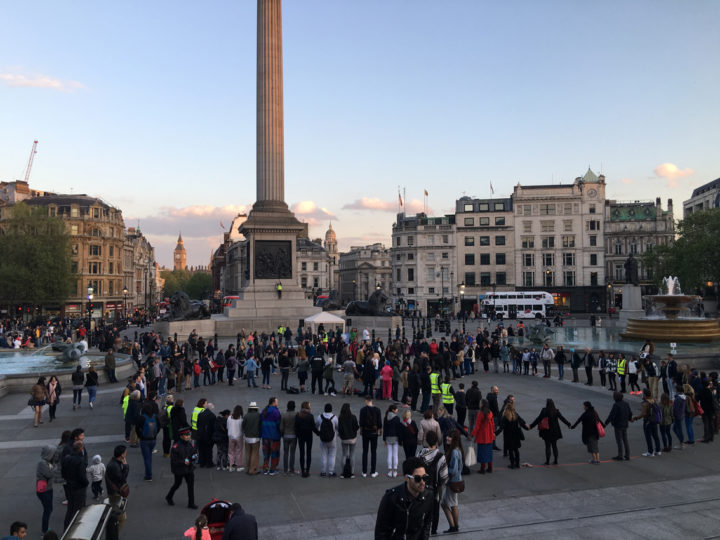 So we’re not just talking about physical violence, like war and torture, but also about economic violence which kills more people than wars, racial and religious violence as well as all other forms of discrimination, sexual violence, gender violence, psychological violence that destroys people’s self-esteem, ecological violence which is destroying our planet, and the violence of having and threatening to use nuclear weapons which probably tick all the boxes of the previous types of violence, and in particular replacing Trident at a cost of about £200 billion when the National Health Service is being run down and privatised (this is what the Junior Doctors are making us aware of) and education, housing and welfare are all suffering the effects of a system that puts money and power above the human being. 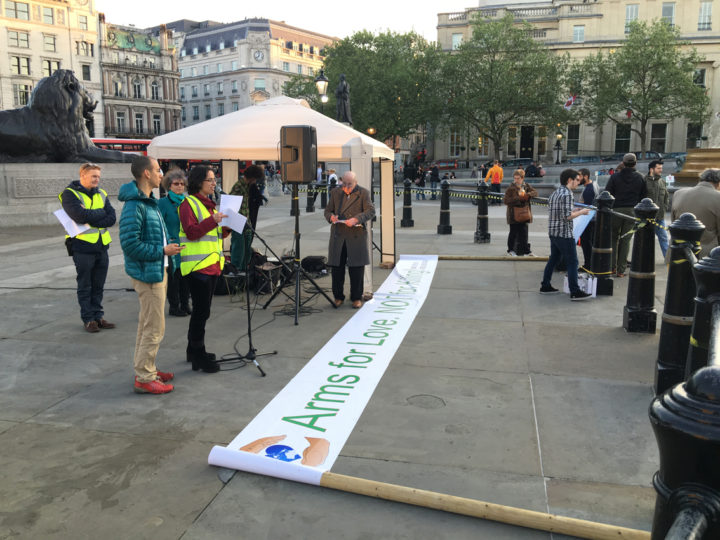 Nonviolence is not only about changing the system but also about changing ourselves, detecting the violence that has already become part of us throughout our formative years without even knowing it. I want to give you a personal example.

Some years ago travelling on the plane (I’m a very nervous flyer) I thought the pilot was a woman and I didn’t like it one bit, which was a shock as I have always worked for gender equality. I realised then I had been conditioned to see women perhaps as less capable. And probably I would have kept this as shameful secret had I not read Nelson Mandela’s biography ‘Long walk to freedom‘ in which he describes a very similar experience when he travelled for the first time in a plane where the pilot was black.

So we both realised that the values and the discrimination of the system condition us whilst we are growing up and that it will not be possible to change the system unless we find, with kindness and compassion, the violence that is already inside ourselves and manage to change it. That’s why non-violent leaders like Gandhi, Martin Luther King, Silo and Aung San Suu Kyi have encouraged practices of personal change as part of the social transformation in the direction of nonviolence that we are seeking. This is the meaning of the Gandhian ‘be the change you want to see in the world’. We have plenty of tools to do this and they are freely available to anybody who wishes to use them. 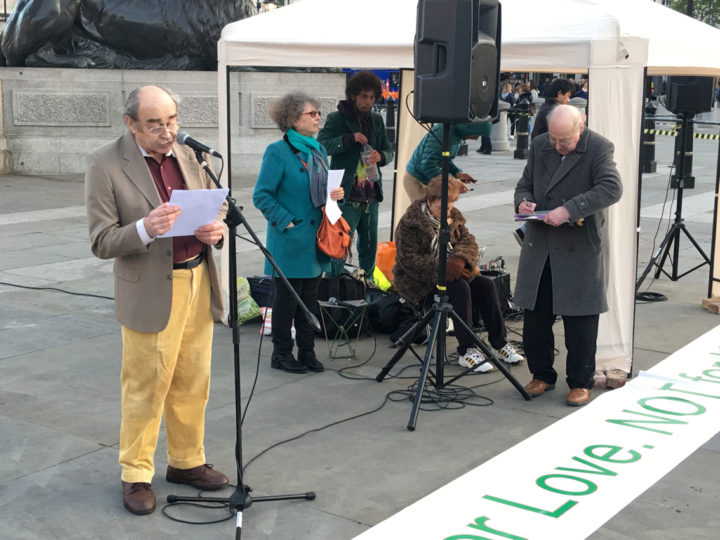 I want to mention also Pressenza, an International Press Agency born out of the World March which is dedicated to the promotion of peace and nonviolence, unlike the corporate media that so often derive their profits from extolling the virtues of a dehumanising state of affairs. We are developing a journalism for peace and nonviolence and anybody who wants to participate is very welcome. Things are looking very bad today because war and violence are creating untold suffering, migration, poverty, inequality, existential emptiness, but there are also millions of people working for change, and yet we don’t hear about them. This is also violence. This peace sign is shouting loud and clear ‘we want change, we want peace, we want a humanised world’. 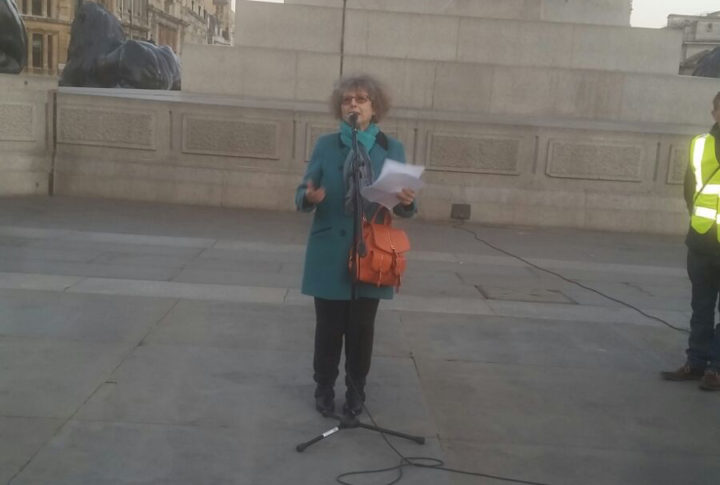 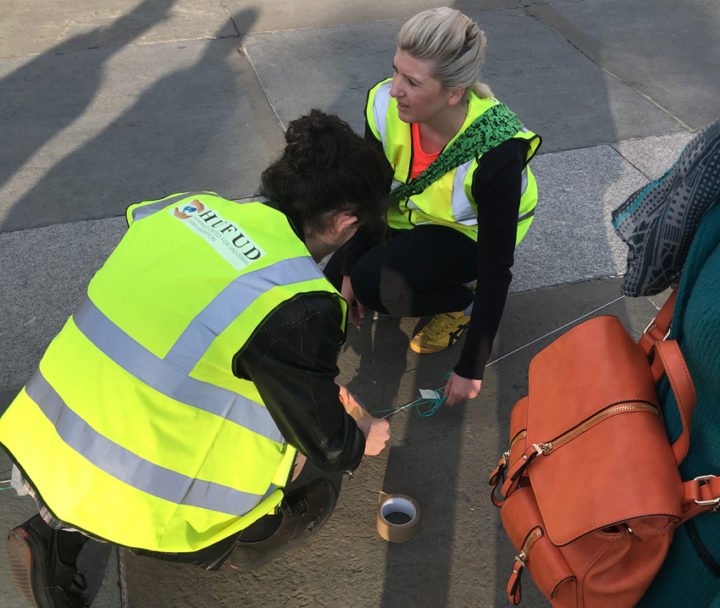