Obama gathered ‘world leaders’ in Washington this past week to once again attempt to justify his ‘Nobel Peace Prize’.  He failed.  (In the final group photo Kiev’s Petro Poroshenko is standing behind Obama.  He grabbed $335 million in US military aid while at the event.  That should tell you all you need to know.)

When the US can’t get the other country with an equivalent size stock of nukes as your own to come to its party then something ain’t working right.  Russia skipped the meeting for these primary reasons:

1)  The US is encircling Russia with ‘missile defense’ (MD) systems in Poland, Romania, Turkey and on US Aegis destroyers stationed in the Mediterranean, Black, and Baltic Seas.  The job of these systems is to pick off Russian retaliatory responses after a US first-strike attack is launched.  These MD systems were outlawed under the Anti-Ballistic Missile (ABM) Treaty between Russia and the US, though when George W. Bush became president he withdrew from the program.  Since then US Space Command research, testing, and deployment of MD systems has been on steroids.

2)  Russia and China keep declaring that the Pentagon’s MD program puts their nuclear retaliatory capability in jeopardy so serious negotiations on nuclear disarmament are on the freeze.  The US claims their encirclement of Russia and China is not about them.  Instead the US claims that Iran is the reason for US MD being stationed near Russia. Washington tells China that North Korea is really the target for is expanding MD in Asia.  Neither Iran nor North Korea have the missile technology to fire a rocket that could hit the continental US.  Iran has no nuclear weapons program and North Korea has a couple nuclear warheads. Hardly a real threat.

3) Current US destabilizing shenanigans along Russia’s huge borders (Ukraine, Georgia, Latvia, Lithuania, Estonia, Finland, Belarus and more) are creating a pincer effect on Moscow.  Putin’s government knows they are on the take down list.  The US-NATO are provoking Russia to militarily respond in order to justify further western moves toward regime change.  A very dangerous game.

4)  We know that Obama is the magician – he says one thing, very convincingly to many people and the corporate dominated media, but on the other hand he is building new generations of nuclear weapons.  New generations of nuclear submarines are in the funding pipeline.  Major space directed warfare technology upgrades continue to be made by the Pentagon. So how serious is the US about showing leadership on the nuclear issue?  Nada, zilch, nix, none…

5)  The Obama team (consisting of many Bush-era neo-cons who created the disaster in Iraq) is bringing many bad characters to its ‘coalition’  – Saudi Arabia, Qatar, Turkey, Ukraine, Japan, South Korea, Israel, France and the UK, among others.  All of these countries are funding, directing, and participating in US-NATO backed hot wars and hybrid wars.  At home each of those countries continue to extract cruel austerity measures as they destroy social programs.  They need the money for war. 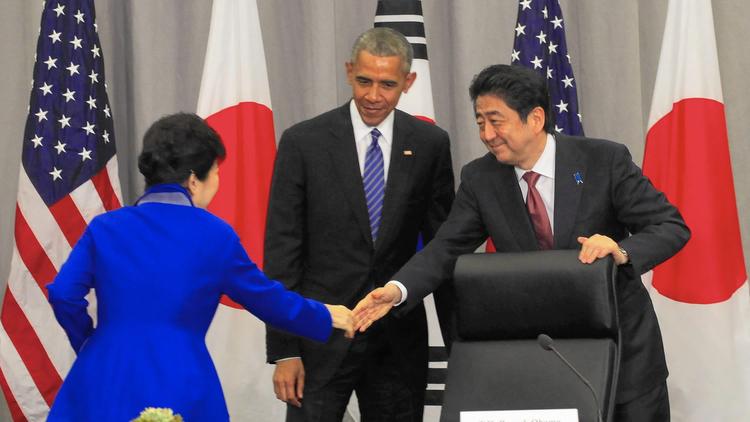 Obama has brought the right-wing leaders of South Korea and Japan into the US military alliance aimed at China and Russia. The White House calls it ‘rebalancing’ into the Asia-Pacific region.

6)  Washington feels that Russia has gotten too big for its britches. The gall of Moscow to defend Syria and the Russian speaking people along its border with Ukraine – this is more than the US can stand.  Russia is supposed to sit back and quietly watch the US take down countries like Yugoslavia, Iraq and Libya. The creation of the counter-IMF/World Bank apparatus called BRICS (Brazil, Russia, India, China, South Africa) directly challenges the west’s banking and global economic domination.  Thus we see Washington working overtime to recently step-up destabilization in Brazil, South Africa and China as well as their on-going campaign against Moscow.  There is a world war going on here folks.

The ultimate goal of the Obama summit is to reinforce the notion that the US still runs the world.  It ain’t so Barack.  Your days are over and its clear that nothing substantial came out of the event.  How could it with Russia refusing to play charades?  These kinds of international discussions should be taking place at the United Nations anyway but the US continues to do everything possible to undermine the UN.  US wants a unipolar world – but the multi-polar world is here.  Get used to it so we can move on and deal with climate change and growing poverty around the world.

Obama is a charlatan and I can’t stand watching him anymore than I did George W. Bush, or either Clinton, or daddy Bush (the CIA man) before that.  They are all corporate stooges.

Drive a stake through the heart of Obama’s nuclear summit.  It wasn’t…….