This morning eight campaigners will stand trial at Stratford Magistrates Court for blocking the road and stopping tanks and weaponry from entering Defence & Security Equipment International (DSEI), one of the world’s biggest arms fairs, when it was in London last September. The trial is expected to last five days.

DSEI takes place every two years in London, it brings some of the world’s most oppressive regimes together with many of the biggest arms companies. It is organised by Clarion Events and the UK Government. Last year buyers included delegations from countries involved in conflict and human rights abusing regimes, including Saudi Arabia, Israel, Bahrain, Pakistan and Azerbaijan.  They were joined by over 1500 arms companies, selling weapons that ranged from rifles to tanks, fighter jets, battleships, missiles, surveillance and riot control equipment.

The defendants are supported by expert witnesses, who will give oral evidence for the defence concerning the nature of the DSEI arms fair:

They themselves will give personal testimony of their reasons for opposing DSEI. They include a Bahraini activist who was tortured during the Bahraini uprising; a Kurdish Solidarity activist with experience of Turkey’s brutal repression and attacks on Kurdistan; and an anti-militarist activist who previously sought to prosecute two arms companies for the promotion of illegal torture equipment at DSEI 2013.

Defendant Tom Franklin, 57, of Clifton Without, York said: “The government is supporting and facilitating the sale of weapons that are being used to kill ordinary people, from the West Bank to Yemen and Sudan.  This week we will put the arms trade in the dock and highlight the crimes that the government and the companies at DSEI are complicit in. Arrest arms dealers, not peace campaigners.”

The defendants are using the defence of necessity, arguing that their actions were justified as they intended to prevent greater crimes including:

In a joint public statement, the Defendants Campaign said: “Tools of the type promoted for sale at DSEI will be used to reinforce apartheid, to surveil and brutalise communities from Brixton to Bahrain, and to perpetuate the border regime that kills thousands every year – as European states wage a war against the refugees they helped create. Weapons promoted at DSEI are used to incinerate whole families at the touch of a button in places from Palestine to Pakistan. Such weapons will continue to devastate landscapes and do permanent environmental damage across the globe. And that these weapons have been used in systematic forced evictions and ethnic cleansing; such as against the people of Kurdistan. And we know that weapons of the type promoted at DSEI will be used to torture and repress people based on their political views, faith,  race, gender, or sexuality in places like Saudi Arabia. Sometimes the tools of oppression are literal – and they are for sale at DSEI.”

The week-long trial will begin today at Stratford Magistrates Court in London. The defendants will be represented in court by Kellys Solicitors of Brighton, Hodge Jones & Allen of London and Bindmans Solicitors of London.

The defendants’ campaign can be reached for comment at:

More information about the DSEI arms fair can be found at: 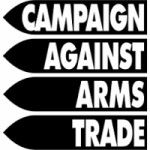