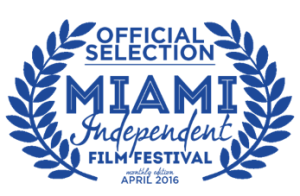 This is a privately screened event that runs every month and is evaluated by an international team of experts in the industry.

The monthly winners then compete to be screened at the annual event. The event aims to create a strong relationship between filmmakers, producers and distributors from all over the world.

The dynamic duo began their adventure with the Miami Independent Film Festival in 2015. Their main goal is to support and give exposure to Indie filmmakers like themselves.

Silo, a Spiritual Path, tells the inspirational story of one man’s response to global violence and the repressive regimes of Argentina and Chile. Silo’s radical system of self actualization leading to nonviolent social change speaks powerfully to those working for social justice and human rights today. This international movement is now practiced by thousands of people around the world, making Silo one of the most important social and spiritual guides to emerge from Latin America.

Combining archival footage with movingly candid interviews, the result is a multifaceted portrait that is both historical and intimate as we see how the teachings of Silo challenge us to change ourselves in order to change the world.

Winner of two awards in March 2016: the Accolade Global Film Award and the Hollywood International Independent Documentary Award of Excellence.

You can see the trailer at: http://www.siloaspiritualpath.com