What is the future of Europe?

In a panel conference organised by Compass (Think tank created in 2003 to discuss the left wing agenda) at the LSE (London School of Economics) Yanis Varoufakis, Academic, economist and former Syriza Finance Minister (Greece) participated with Caroline Lucas, Green Party MP, Zoe Williams, Guardian journalist, and Neil Lawson, Chair of Compass. The panel was hosted and facilitated by Mary Kaldor, Professor of Global Governance at LSE. The topic was “Good Europe: what is the purpose of the European Union in the 21st century?”

Lawson opened the meeting with an invitation to re-imagine what kind of Europe we want.  Kaldor asked the panel what is the European Union for. 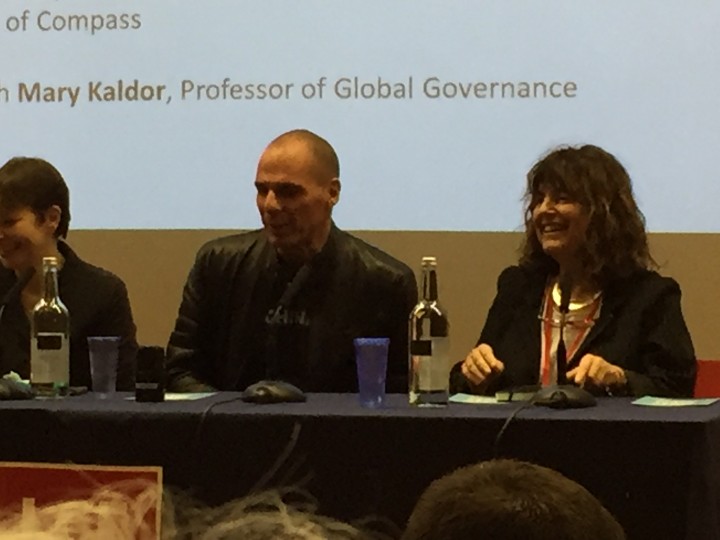 Lucas said that the vision of Prime Minister Cameron is more free trade and less free movement. The original idea for the EU was peace in the post-war period by binding nations together. The next new big idea should be sustainability, becoming a leader in pioneering a new economic form and closing the inequality gap. On the issue of climate the EU has been a leader. That is why hedge funds want to leave the EU and its regulations. The Tobin tax was another positive step. But it needs to be more transparent and accountable. The TTIP including the ISDS is supported by Cameron. Regarding refugees, EU institutions are trying to find solutions against the decisions of right wing governments.

She went on to state that the funds necessary to transform Europe can come from stopping Trident, the renewal of the British nuclear weapons system. Also by developing Investment banks and setting up a minimum wage throughout the EU. She quoted Kenneth E. Boulding who said, ‘anyone who believes in indefinite growth in anything physical, on a physically finite planet, is either mad or an economist’.

Williams invited us to imagine what a good Europe would look like and then vote to stay and change it because that is not what it looks like now. However the EU has been operating as a union for the environment. Her view is that EU institutions are so slow that undoing legislation (eg to protect the environment, clean beaches, etc) takes ages. Trading agreements were not part of the original purpose but rather to stop people killing each other. At present a humanitarian Europe could make people proud to be humanitarians.

Kaldor reminded us that the original purpose was not only no more wars but also no more fascism and that the much complained about decisions made in Brussels pale in comparison with the power of decisions made in the headquarters of Amazon and Google. And in an unfettered globalised world the EU can be a protection for social issues. In response to a question from the floor regarding security she stated that the EU has a role in human rights security rather than state security. Extending the rule of law to help people at local level. 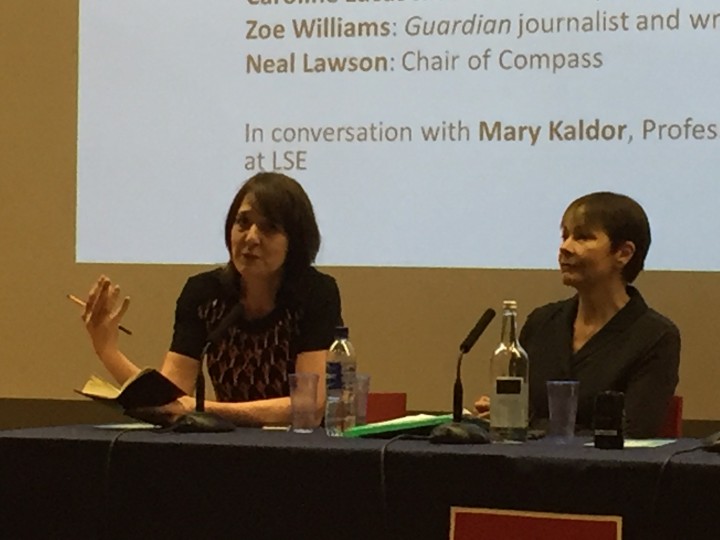 Williams thought the EU lacks confidence for solving any problems. It is creating a shadow economy with its own delusions such as giving Turkey €3 billion to stop refugees coming into Europe which is impossible.

Varoufakis in response to what is the purpose of the EU in the 21st century joked: No purpose! but perhaps an opportunity. It depends on how we handle its disintegration. Like a postmodern version of the 30s. The Eurozone has been a spectacular failure. Walls are going back up, fences are being electrified and economic failure breeds authoritarianism.

Europe failed on the same principles in 2008 as in 1930. The Left make a big mistake thinking there is a conspiracy, that there is a plan, but in reality those in power are clueless, making it up as they go along. In the US they discuss how to contain the crisis. In the EU how will we pretend that the construction we made is stable. It’s leading to the upsurge of Golden Dawn and its equivalents in other countries. Can we do better than in the 1930’s?

What is needed is a Democratic alliance of the left, liberals and greens for a different Europe.

The Nation state cannot provide the cocoon people hope for. Germany is at its lowest level of investment since 1945 and it is affecting the workers. Something is seriously wrong with the nation state. Varoufakis in fact campaigned against the Eurozone where he believes deflation and high unemployment are to be expected. It will affect the whole world though. He had met Mary Kaldor’s father who in 1971 declared that the European economic union was a bad idea which would not help political union.

Asked if he has an opinion about the issue of sovereignty, which is used to blame the Brussels bureaucrats he again joked: I have a view about everything and remain optimistic in the absence of all evidence!

He then went on to say that Cameron does not really mention sovereignty (calls the deal he brought back “the mother of all fudges”). But those who want to leave the EU in order to have parliamentary sovereignty want to remain in the single market. A single market cannot exist without common interests, meaning pooled sovereignty. The options are to allow the disintegration of the EU or to stay in and fight tooth and nail against its antidemocratic institutions.

Lucas pointed out that blaming Brussels for our possible loss of sovereignty is a media thing but no mention is made of the loss sovereignty in relation to the big corporations and the TTIP. Control of immigrants is proposed both by the right and the left. It is necessary to develop consistency in foreign policy and sanctions.

Varoufakis agreed and added the need to develop solidarity, for instance with German workers, not just Greece. Solidarity works if there is hope and if there is a unifying project. There is a need for a constitutional assembly, a new document. A humanist project with an economic, social and political agenda. A humanist position regarding refugees. We must draw a distinction between majoritarianism and democracy. Majorities can have a tendency towards awful positions when democracy is lost. When parliaments realise they have no power and lose the dream of shared prosperity they become inward looking and the ones who benefit from that are the racists, the bigots and the xenophobes. What did they think was going to happen when they imposed the ‘Nemesis’ (enforced austerity) crushing the people of Greece? They created the conditions for the neonazi majority, drowning any possible humanism. (Responding to a question from the floor): as for Putin he was a war criminal long before Ukraine but he was the blue eyed boy of the West. He crushes Russian democrats. When NATO encroaches into old communist territory against promises made to the contrary it gives the best present to Putin against Russian democrats. My recommendation, think as a Russian democrat.

A member of the public made an impassionate criticism of British democracy given the first past the post system gives absolute power to a government elected by a minority. There was also a question regarding the EU and climate change.

Lucas responded that the EU is already engaged in researching a circular economy where products contain in themselves their recycling capacity but that is at odds with the promotion of a competitive economy and growth. She believes the Greens need to be able to paint a more positive picture of working fewer hours and spending more time with loved ones rather than spending more time at the office to buy more stuff. She strongly agrees with the need for a more democratic electoral system in the UK. The Unions and Jeremy Corbyn are now more engaged in electoral reform and even some Tories agree.

Varoufakis commented on the very brief experience of Athenian democracy in which the free and waged controlled government, being as they were the majority. His view is that our liberal democracies come from Magna Carta being a charter for masters on how to prevent the peasants, the hoi polloi (1) from getting power and that is done via the first past the post electoral system. Europe is even worse. Created as a cartel, its administrators had no interest in and have a profound disdain for any notion of democracy. So here is an opportunity, by creating a new constitution to democratise Brussels and the nation states. But to do this some serious money will be necessary. So, instead of buying German government bonds it would be better to buy investment bank bonds. Investing 5 or 6% into new green technologies, do away with the ‘double Dutch-Irish sandwich’ (tax avoidance technique used by large corporations).

The panel was at this point invited to make proposals on how to establish a campaign to achieve the objectives mentioned, in the next 3 months.

Varoufakis explained DiEM25 (Democracy in Europe Movement 2025) launched in Berlin on Feb 9th with an agenda to democratise European institutions, demanding immediate transparency (eg live streaming meetings and publishing documents such as TTIP negotiations) and to reconfigure the way the crisis is destroying lives, to address private and public debt, the banks and low investment. Creating an anti poverty bank funded by the profits of the European central banks. And then convening the constitutional Assembly. This is the 10 year Plan for the EU.

Lucas remarked on the importance of DiEM25 to create a more democratic and accountable Europe. She mentioned the Plan B campaign, the Good Europe campaign from Compass and Another Europe is possible together developing into a paneuropean grassroots movement. She then paraphrased Arundathi Roy: ‘Another Europe is not only possible but she’s on her way and on a quiet day I can hear her breathing’. 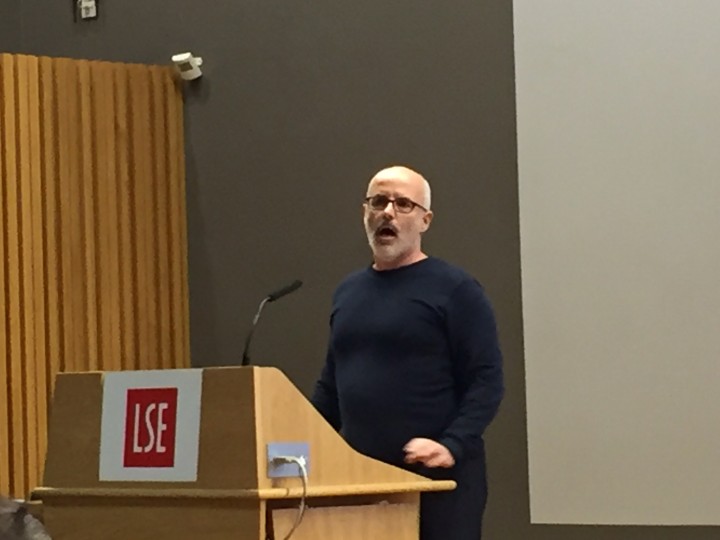 (1) Hoi polloi (Ancient Greek: “the many”) is an expression from Greek that means the many or, in the strictest sense, the majority. In English, it has been corrupted by giving it a negative connotation to signify deprecation of the working class, commoners, the masses or common people in a derogatory or, more often today, ironic sense. (Wikipedia)