Last July Varoufakis stepped down as Tsipras’s Finance Minister in order to avoid becoming an impediment to an agreement between Greece and Europe, or so he said at the time, but really because he didn’t agree with the deal, as he later admitted. Since the submission of the Greek government to the Troika’s demands, little has been seen of the former minister’s projects that he presented to those who would subsequently impose a third rescue package on Greece with conditions even more devastating than those originally planned.

But now the Greek economist has announced the presentation of the pan-European project DiEM 25 (The Democracy in Europe Movement 2025).

In the draft six-page document, which can be found here, Varoufakis makes an analysis of the situation in Europe and what it’s trying to do.

The project aims to achieve its objectives by 2025 (hence the name of the movement). Ten years to transform Europe from a “we, the governments” and “we, the technocrats” to a Europe of “We, the peoples of Europe.”

A movement with a new sensibility

According to declarations by Varoufakis, the aim is to unite the European Left, and some have already expressed their interest in joining this movement (in Spain, some militants from the old politics, such as United Left, and part of the “Mareas”, the symbols of the new forms of working at the grassroots).

From other points of view and in line with the language, the sensibility of parts of the document and some given examples, what is being sought is a project that goes much further. Not only has it been born across-borders – being of the measure of the historical moment in which we live – but also it is based on other kinds of values, surpassing the old definitions of right and left. For example, it goes way beyond political and economic matters; it puts life and freedom of people as the most important; real and participatory democracy as fundamental; it is based on and born from the grassroots; it is advocates for freedom of expression, art, etc.

On page 5 of the Manifest to Democratise Europe it says:

We are inspired by a Europe of Reason, Liberty, Tolerance and Imagination made possible by comprehensive Transparency, real Solidarity and authentic Democracy. We aspire to:

Ada Colau, Mayor of Barcelona, is part of the project

We know that the Mayor of Barcelona, Ada Colau, is part of the project and will have an important role in the presentation and in the movement. 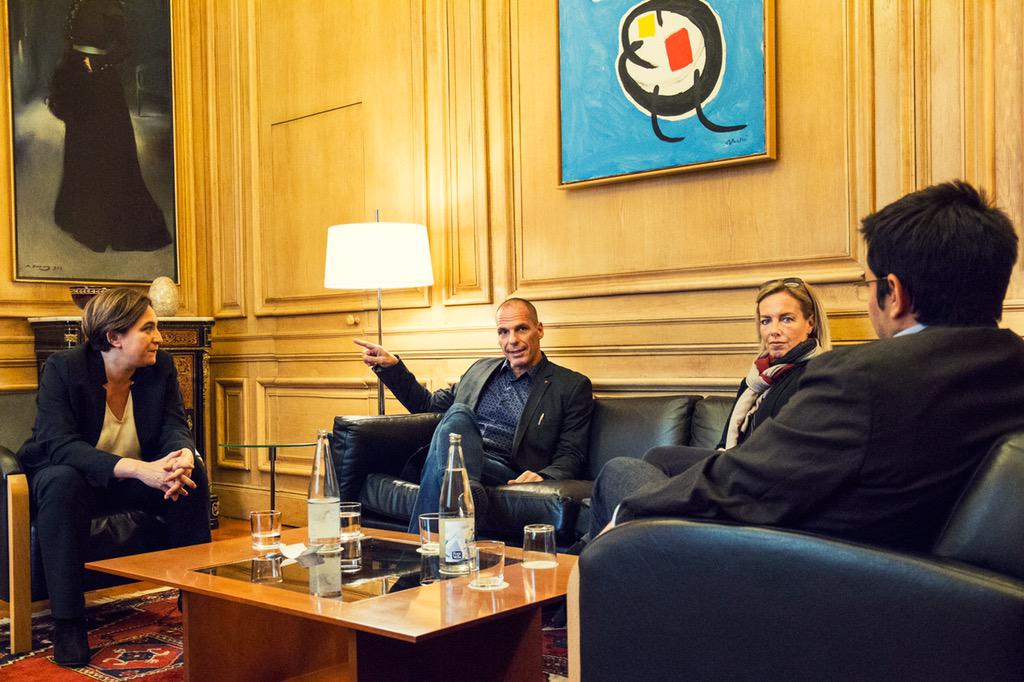 Trobada amb @yanisvaroufakis per parlar de Ciutats i Democràcia. Una altra Europa és possible i la farem des de baix
(Meeting with Yanis Varoufakis to talk about Cities and Democracy. Another Europe is possible and we will do it from below.)

Now Colau’s words to the media before the municipal elections in which she was elected take on a different meaning. On being asked about her position regarding the possible independence of Catalonia, she said, “I’m not fighting for independence; neither Catalan nor Spanish. I’m here to breakdown the borders because they only exist for the poor.”

Moreover, it seems that political figures from various countries are also implicated in the project which has been set up to confront policies imposed from Germany.

Symbolism in the DiEM 25 Presentation

The presentation on the 9th of February will be in Berlin, in the heart of Germany, from where policies are dictated which the population of Europe suffers from, especially those countries in the south.

And it will take place in the Volksbühne Theatre in Berlin (the People’s Theatre), dedicated to alternative authors and located in Rosa Luxemburg Square. Everything is symbolic.

According to Varoufakis’s declarations, the presentation was planned for last November but the attacks in Paris forced a delay because of the gravity of the events and also to avoid the news going unnoticed.

We don’t know if this will finally be the start of a true construction of a Europe of the People – so unfairly delayed – and a prelude to the long-desired Universal Human Nation… but the attempt is worthwhile.