The biotechnology giant continues attempts to build its GMO seeds plant in Argentina, despite three years of unflinching popular opposition.

The world’s largest GMO corporation never imagined that it would suffer one of its major setbacks in a small, rural town in central Argentina.

Popular opposition, irregularities in the company’s environmental impact assessment, a protest blockade at the entry gate, and a court ruling stalled the construction of its seeds plant three years ago.

The most recent blow to the corporation occurred when it made a new attempt to enter the site in the municipality of Malvinas Argentinas, in the province of Cordoba. Protesters received an eviction notice, but local socio-environmental assemblies mobilized to strengthen the blockade, and a prosecutor suspended the order.

The court order was clear: in 24 hours the activists had to give free passage and allow entry to people and machinery to the 30 hectares site owned by Monsanto. The prosecutor Víctor Hugo Chiappero declared: “Within 24 hours upon notification of this order, the free movement and entry of people and things at the site of the company Monsanto must be allowed, removing all obstacles under the penalties prescribed by law. Failure to comply with this notice within such period of time will lead to the removal by security forces.”

It was the last business day of the month (Dec. 30), and the beginning of the January court recess (when there is only on-duty staff and no handling of appeals). The measure had been requested by Ignacio Soria, Monsanto’s lawyer. The reaction was immediate. Social networks, community radio stations, and other alternative media all spread the news, while social organizations called for a gathering at the encampment ? ongoing for more than three years ? on the side of Route 88, right in the entry gate of the company’s site.

The first communiqué from the assembly of the blockade was released on that same day. They laid out three points. First, the ruling issued by a provincial court on Jan. 8, 2014, declared the ordinance that allowed for the installation of Monsanto’s plant unconstitutional. Second, the Secretariat of Environment had rejected the company’s Environmental Impact Assessment due to serious inconsistencies. Third, Article 20 of the Provincial Law promoting “environmental coexistence” is still in force (Law no. 10208) and it states that no company whose environmental impact study has been rejected can submit it again.

In their communiqué, the Asamblea de Autoconvocados del Bloqueo, (Self-Organized People of the Blockade) and the Asamblea Malvinas Lucha por la Vida-Línea Fundadora (Malvinas Struggles for Life-Founding Chapter) state: “There are enough reasons to say that Monsanto’s plant installation is illegal. It should have left this town more than a year ago.” 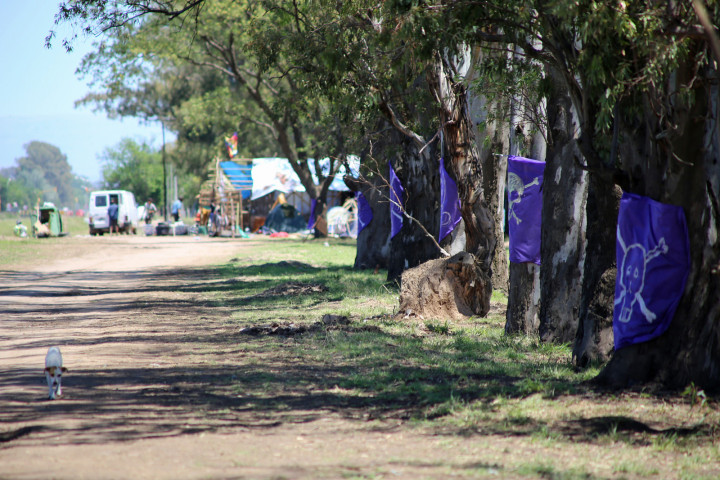 On Dec. 31 the activists’ lawyer, Darío Ávila, submitted a request for annulment of the Prosecutor’s order. Ávila explained, “There’s a huge contradiction in what the Prosecutor did. A decision is still in force, issued by the provincial labor court, which ruled that the Municipality cannot authorize any execution of works until Monsanto issues a new environmental impact study.” Judge Roberto Cornejo dismissed the request and instead gave the green light to the requested eviction of the blockade. Lucas Vaca, of the Malvinas Argentinas Neighbors Assembly, said they were “on red alert” waiting for the police. “They don’t understand that we don’t want money, we just want Monsanto out of our land. These companies both poison and kill us. We want them out,” said Vaca.

Eduardo Quispe, a neighbor of the town and blockade supporter, explained that guard-keeping was strengthened at the blockade and more neighbors and organizations from Cordoba and other provinces were called for support. Vanina Barboza Vaca, one of the Assembly’s founders, acknowledged they have a mix of fear, anger and indignation. She knows that Monsanto’s attempts are not a matter of mere chance, but should be considered in relation to the political climate. “This government means a huge step backwards, it’s going to be really complicated but we’re still in the struggle,” Barboza Vaca added.

On Jan. 4, the assemblies partially blocked the route, giving information about the situation to neighbors and drivers. They declared a state of “permanent alert” in the face of a potential repression, and called for a march on Jan. 8 at the provincial capital.

In 2012, the neighbors of Malvinas Argentinas found out on television that the world’s biggest agribusiness company had decided to install a GMO corn seeds megaplant in their town (14 km from the provincial capital). The announcement was made by former President Cristina Fernández de Kirchner, who said it would be a 30 hectares lot with 240 enormous silos.

An unprecedented process begun at that time: massive assemblies, marches, requests for explanations. They had two main demands: to have access to the environmental impact assessment, and to be able to vote so that the population could decide. The corporate and governmental answer to those demands: half a dozen repressions.

Between 2012 and 2013, the national universities (of Cordoba, Rio Cuarto and the Catholic University) questioned the installation of the plant. They denounced that construction permits were given without a prior environmental assessment, contrary to what is mandated by the General Law on the Environment (no. 25675), and that public hearings were not carried out. The three universities explicitly mentioned the validity of the “precautionary principle” (when an activity raises threats of harm to human health or the environment, precautionary measures should be taken.) This was a significant development as universities have typically supported the agribusiness industry.

On Sept. 19, 2013, the festival “Spring Without Monsanto” was organized. Announced as a space for music, encounter and debate, it was also the time chosen by the Assembly to indefinitely block the entry gate of the site. Severe repression ensued ? with more than 20 injured, always neighbors? carried out by the provincial police, political brokers and gangs of the local construction workers union.

On Jan. 8, the provincial labor court suspended construction of the plant as requested by the Assembly in a writ of amparo (judicial protection of civil rights). The court’s decision declared that the ordinances issued by the Municipality and the Province permitting construction works were arbitrary and unconstitutional. On Feb. 1, 2014, the provincial Secretariat of Environment rejected the environmental impact assessment due to important technical flaws. Among them, the study did not explain how the company would manage tons of waste nor its high use of water.

The debate around Monsanto multiplied complaints about the massive use of agrochemicals, deforestation, droughts and property speculation. In the neighboring town of Rio Cuarto (where Monsanto planned to install an experimental plant), the actions of social organizations and the provincial university lead to questions regarding the company’s presence. The mayor, Juan Jure, issued a decree banning the installation of the plant.

Another consequence: the multinational company Syngenta acknowledged in 2015 that it cancelled its GMO seeds plant in Villa Maria (a town in Cordoba), “to prevent a new source of conflict.” Thus the company linked the decision to the events in Malvinas Argentinas. For the socio-environmental assemblies it meant a victory of their struggle. Monsanto made no statements regarding the events of two weeks ago. But it did call the neighbors “violent” on different occasions, removed its top management in Argentina and made it known that they aim to install the plant in 2016.

The on-duty prosecutor Adriana Abad suspended the eviction order on Jan. 6, thus quashing the request of her colleague Victor Chiappero (who is on vacation). Abad stated there were no reasons to allow the eviction, although Chiappero can ratify the measure when he returns to work in February.

Jan. 8 was the second anniversary of the court ruling that stalled the installation of Monsanto in Argentina. It was the day chosen by assemblies, social organizations and left-wing parties to march simultaneously in three of the biggest cities in the country ? Cordoba, Buenos Aires and Rosario.

Nora Cortiñas, a figure in the struggle for human rights and a member of Mothers of Plaza de Mayo Founding Chapter, lead the march in Buenos Aires. A long flag demanded “Monsanto, out!,” while Nora’s small banner was a call for action: “Yes to life, no to agro-toxics.”