Iranian President Hassan Rouhani has offered Christmas felicitations to heads of state across the globe, expressing hope that the world will see peace and security.

“On the eve of the New Year, I hope that we would see, through efforts and more cooperation between world countries, restoration of daily-growing peace and security, elimination of discrimination and eradication of terrorism across the globe,” Rouhani said in his message on Thursday December 24, 2015.

He also said that a “return to the teachings of divine religions” will help unmask those who are presenting a “violent and untrue image” of religious teachings through “terrorist and criminal” acts.

Rouhani was alluding to Takfiri groups who have committed all kinds of atrocities under the name of Islam.

The Iranian president also prayed that God bestow “happiness and prosperity” upon nations and governments.

In another development Iran’s President said the Islamic world is currently at a critical juncture, urging all Muslim nations to strengthen unity to counter enemies’ plots.

The Iranian president added that faced with such plots, “Muslims have no option but to join hands in unity and … choose the right path.”

Rouhani stated that a great deal of the ongoing violence, acts of terror and massacre are taking place in the Muslim world, North Africa, the Middle East and West Asia, adding that there must be an end to the “intellectual and discourse-based violence.”

The president criticized certain Muslim countries for purchasing great quantities of US arms, and either delivering the weapons to militant groups or using them against other Muslim nations.

Daesh Takfiri terrorists, Rouhani argued, recruit members that are overcome by cultural or economic poverty, adding, “So, let’s eradicate cultural and financial poverty in our societies.”

Elsewhere in his address, the Iranian president emphasized that bombs and military equipment cannot do away with terrorism.

The biggest responsibility we shoulder is to repair the image of Islam in the eyes of the world public, President Rouhani said.

In reference to efforts made to unseat the Syrian President Bashar Assad, Rouhani said no foreign country can make decision on the fate of another country and only that country’s people, can make that decision.

Iran has repeatedly announced that it pursues the goal of achieving a world without violence and that every problem can be settled through negotiations, Rouhani said.

Iran succeeded in solving a problem, which had been aggravated over years, through wisdom and negotiations with major world powers, he noted, adding, “At the negotiating table, we managed to bring the most complicated international political issue to a solution that is beneficial to all the negotiating sides, the region and the world.” 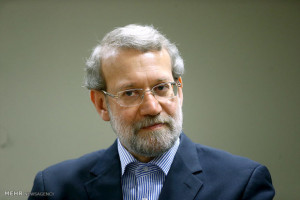 In separate messages to all his counterparts across the globe, Iran’s Speaker of Parliament also congratulated the birth anniversary of Jesus Christ and New Gregorian Calendar Year.

‘I wish to felicitate the anniversary of the birth of Jesus Christ (PBUH) and the new year of 2016 to you and all your respected colleagues in the parliament,’ reads the opening of Ali Larijani’s letter to his counterparts around the word.

The Speaker of Iran’s Parliament, Ali Larijani, also called for restoring divine teachings of holy prophets to have a world of peace, justice, and tranquility with no political, economic, social or developmental discrimination.

‘The year in prospect is more at stake under the threat of growing terrorism and the latest attacks in western Asia, Europe, and Africa convinced all the people of the world of the extent of danger we are all posed to,’ underlined Larijani demanding cooperation of all countries in war on terror.

He also called for bilateral parliamentarian cooperation in fighting with terrorism and preventing the spread of extremism, poverty, injustice, hypocritical policies towards other nations, and intervention in the domestic affairs of other countries.

‘I desire to stress that Islam is the religion of peace, brotherhood, and merit for the whole race of human being and the crimes of Takfiri groups, extremists, and terrorists have nothing to do with Islam,’ underlined Larijani in the closing paragraph of his message.