In recent days we have heard President Obama calling for Spanish Unity, as if he were acting as a matchmaker or a marriage broker, just as in the past we heard the same from General Franco. And it’s true that the relationship between Catalonia and the Spanish state was never a relationship born of love, but rather a marriage imposed by force and violence in the so-called War of the Spanish Succession of 1714, in which the Catalan people were defeated by the troops of Philip V and Louis XIV. Those were times in which a new world was emerging, a world of representative democracy instead of absolute monarchy. Catalonia, with its own parliament, its own institutions, its legal and military system, its border controls, was finally vanquished and stripped of its statehood to be turned into a consort, not a lover, of the Spanish state, a marriage perpetuated by the dictatorship of General Franco, a Catalonia in which it was forbidden to speak Catalan in schools, at Mass, in the theatre and even in telegrams.

Despite all of this, the Catalan independence movement was for many year represented by little more than a handful of groups called in those days “radicals”.

They would never have believed that over the last four years, the Diada, Catalonia’s national day, in which the defeat of 1714 is commemorated, the streets of the city of Barcelona would be filled with multitudinous, festive and civil demonstrations for independence.

The Catalan National Assembly (ANC in its Spanish initials), formed by more than 500 regional assemblies, is the driving force behind the reality that Catalonia is experiencing in these moments. A big grassroots movement is working shoulder to shoulder for independence of the nation through democratic and peaceful means. They organised the biggest demonstrations in the history of the country and the biggest in Europe. Before things were achieved by force, now the force is in the streets and in the polling stations.

In Popular demonstrations such as the one on Diada, the 11th of September, it is calculated that one million four hundred thousand were on the streets. It must be said that not everyone was demonstrating for independence but everyone was 100% in favour of defending the Right to Decide. And these parliamentary elections taking place next Sunday, 27th of September, have turned into a plebiscite due to the repeated and permanent denial by the Spanish state to the right to decide through the ballot box. 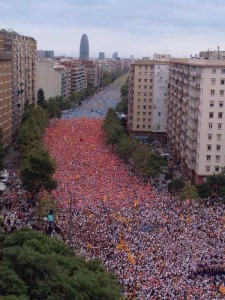 For the current government, the People’s Party, democracy has been great. Not in vain the PP have their origins in the “People’s Alliance” Party that was founded by Manuel Fraga, a minister during Franco’s dictatorship. And it happens that in a marriage imposed by force, one of the spouses is subject to the other. And it could be that for many years the subjugated one makes sufficient concessions in order to accept to a greater degree to remain within the relationship.

The 1978 Constitution retook the right of autonomy of nations and regions that form the State, thereby giving a response to a problem that has been repeated throughout the history of this country, that is, the different identities with which Spanish unity has been built. So the Statute of Autonomy of Catalonia was approved, having been countersigned by her citizens.

With the arrival of the PP into government in 2011, not only did cuts to public services arrive, there also came limits to self-management and financing of the autonomous regions, making it increasingly difficult to govern in Catalonia.

In July 2010 there was a significant turn of events, the Constitutional Court made public its decision regarding the Catalonia Statute: “The Constitution knows nothing other than the Spanish nation.” “A Statute cannot fix the scope of the norms of the State,” the court said. And this opened the door to question the language model in teaching. “Having to know Catalan” has a limited scope. It’s as if the Spanish Constitution, in that moment, stopped recognising any rights of Catalonia as a people.

Until the arrival of the Divorce Law, approved in 1932 during the Second Spanish Republic, marriage could only be dissolved on death of one of the spouses. In the debate leading up to the change, the Canon and Deputy Ricardo Gómez Roji opposed divorce, “in the name of the family and for the good of women, because marriage is ‘sacred’ and therefore unbreakable,” he said. “Divorce is dynamite to explode a family.” “Marriage is an institution of sacrifice, an unavoidable cross, it’s a sacrifice that sanctifies.”

Fortunately, we aren’t in 1932. Currently marriage is based on equal rights of the two spouses and can be dissolved by mutual consent or on petition of either one.

There are those who consider that Catalan independence should be decided by all Spaniards. It would be like telling a woman who wants to separate that her decision is not sufficient, and that she has to gather the entire family, the parents, the brothers and sisters, aunts and uncles, grandparents, cousins, so that everyone decides if she can separate from her husband.

In recent months, and in the measure that the Catalonia Parliamentary elections approach, the PP government has systematically and increasingly convincingly beaten down the expectations of the Catalan independence movement. To the severe social cuts are added cuts to democratic freedoms, among them the Gagging Law that denies the right to demonstrate, compromising Human Rights. In the last days of the PP government they are reaching even further, obliging the Constitutional Court, through an Express Reform Law in which the court is directly implicated, to incapacitate any politician that disobeys the Constitutional laws.

With only one week to go to the elections, we have already heard the expressions in favour of Spanish Unity by Merkel, the possibility that Catalonia will be outside the Euro and statements from the Bank sowing fear about a possible bank run. And from the Finance Ministry, putting in doubt the pension payment, in case of independence.

What Merkel and the IMF don’t know is that for many people, independence has already become an issue of dignity.

“The dogs are barking, it means we are moving forward” – Don Quixote

Antonia Utrera
Antonia Utrera lives and works in Barcelona, Spain. Writer, editor and journalist. Long experience in the media and communication. Director of the magazine Acelobert Barcelona. A member of the Noesis Humanist Centre of Studies.