Carbon emissions continue pushing the Ecological Footprint further above the planet’s annual budget
(OAKLAND, CA, USA) — AUGUST 13, 2015 —In less than eight months, humanity has used up nature’s budget for the entire year, with carbon sequestration making up more than half of the demand on nature, according to data from Global Footprint Network, an international sustainability think tank with offices in North America, Europe and Asia.

Global Footprint Network tracks humanity’s demand on the planet (Ecological Footprint) against nature’s ability to provide for this demand (biocapacity). Earth Overshoot Day marks the date when humanity’s annual demand on nature exceeds what Earth can regenerate in that year. Earth Overshoot Day has moved from early October in 2000 to August 13th this year. The costs of this ecological overspending are becoming more evident by the day, in the form of deforestation, drought, fresh-water scarcity, soil erosion, biodiversity loss and the buildup of carbon dioxide in the atmosphere. The latter will significantly amplify the former, if current climate models are correct. Consequently, government decision-makers who factor these growing constraints in their policy making will stand a significantly better chance to set their nation’s long-term economic performance on a favorable track.

“Humanity’s carbon footprint alone more than doubled between 1961 and 1973, which is when the world went into ecological overshoot. It remains the fastest growing component of the widening gap between the Ecological Footprint and the planet’s biocapacity,” said Mathis Wackernagel, president of Global Footprint Network and the co-creator of the Ecological Footprint resource accounting metric. “The global agreement to phase out fossil fuels that is being discussed around the world ahead of the Climate Summit in Paris would significantly help curb the Ecological Footprint’s consistent growth and eventually shrink the Footprint.”

The carbon footprint is inextricably linked to the other components of the Ecological Footprint — cropland, grazing land, forests and productive land built over with buildings and roads. All these demands compete for space. As more is being demanded for food and timber products, fewer productive areas are available to absorb carbon from fossil fuel. This means carbon emissions accumulate in the atmosphere rather than being fully absorbed.

Over the course of 2015, the absorption of greenhouse gases alone would require 85 percent of the planet’s biocapacity. “At current carbon emission levels, it would take twice the current global forest biocapacity to absorb all the carbon emissions that are generated around the world,” pointed out Wackernagel. “A crazy feat if you consider that we also use forests for timber products. Also, this demand for carbon sequestration is greater than the entire biocapacity of cropland and grazing lands on the planet combined.”

The climate agreement expected at the United Nations Conference of Parties (COP) 21 this December will focus on maintaining global warming within the 2-degrees-Celsius range over pre-Industrial Revolution levels. This shared goal will require nations to implement policies to completely phase out fossil fuels by 2070, per the recommendations of the U.N.’s International Panel on Climate Change (IPCC), directly impacting the Ecological Footprints of nations.

Assuming global carbon emissions are reduced by at least 30 percent below today’s levels by 2030, in keeping with the IPCC’s suggested scenario, Earth Overshoot Day could be moved back on the calendar to September 16, 2030 (assuming the rest of the Footprint would continue to expand at the current rate), according to Global Footprint Network.

This is not impossible. In fact, Denmark has cut its emissions over the last two decades at this rate: Since the 1990s, it reduced its carbon emissions by 33 percent. Had the world done the same (while not changing the rest of the Footprint), Earth Overshoot Day would be on October 3 this year.

This is not to say that Denmark has already reached a sustainable Ecological Footprint. Humanity would require the resources of 2.85 planets if everyone lived like the Danes, which would move Earth Overshoot Day to May 8. 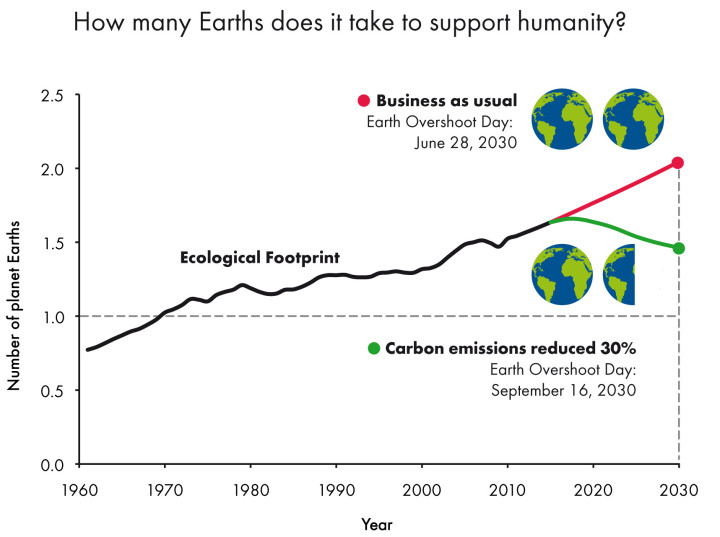 By contrast, business as usual would mean using the resources equivalent to two planets by 2030, with Earth Overshoot Day moving up on the calendar to the end of June. 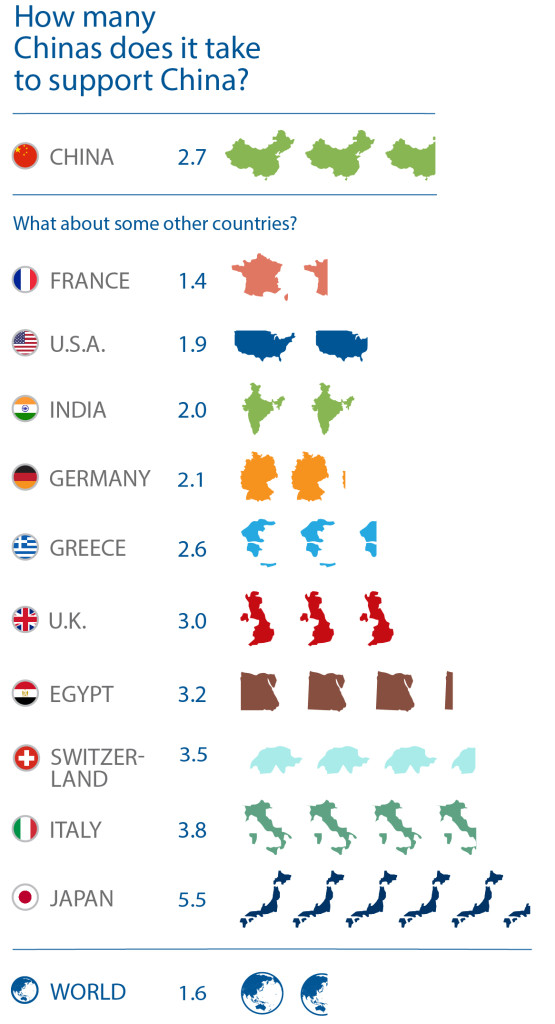 “We are encouraged by the recent developments on the front line of renewable energy, which have been accelerating worldwide, and by the increasing awareness of the finance industry that a low-carbon economy is the way of the future,” said Wackernagel. “Going forward, we cannot stress enough the vital importance of reducing the carbon footprint, as nations are slated to commit to in Paris. It is not just good for the world, but increasingly becoming an economic necessity for each nation. We all know that the climate depends on it, but that is not the full story: Sustainability requires that everyone live well, within the means of one planet. This can only be achieved by keeping our Ecological Footprint within our planet’s resource budget.”

To calculate your own personal Ecological Footprint, and learn what you can do to reduce it, go to: http://www.footprintnetwork.org/calculator

Global Footprint Network is an international think tank working to drive informed, sustainable policy decisions in a world of limited resources. Together with its partners, Global Footprint Network coordinates research, develops methodological standards, and provides decision-makers with a menu of tools to help the human economy operate within Earth’s ecological limits.