Sonia Ines Goéz Orrego is the executive director of CEDECIS, a community organization working in some of the most violent areas of Medellín.  With two decades of experience in community organizing and building a culture of peace, she discussed how people have come together to prevent forced recruitment of young people by gangs, paramilitary, and guerrilla organizations, to train children and adolescents in nonviolence, and to build more resilient and peaceful communities. There are a lot of invisible borders in Medellín.” The 13th District, locally known as the Comuna 13, is known to be one of Medellin’s most troubled and dangerous districts, and is continually suffering from gang warfare and violence. Two powerful crime networks, the Caribbean-based Urabeños and Medellin’s own Oficina de Envigado crime syndicate, have vied for control of the neighborhood for years, causing repeated territorial wars in the streets of Comuna 8.”What’s an invisible border? It’s a place where nobody can be, only those who belong to the combo that controls the territory,”

CEDECIS’s experience is especially relevant today as the Colombian government and FARC guerrillas steadily advance the peace negotiations in Havana, Cuba, that would end the Western Hemisphere’s longest running conflict. 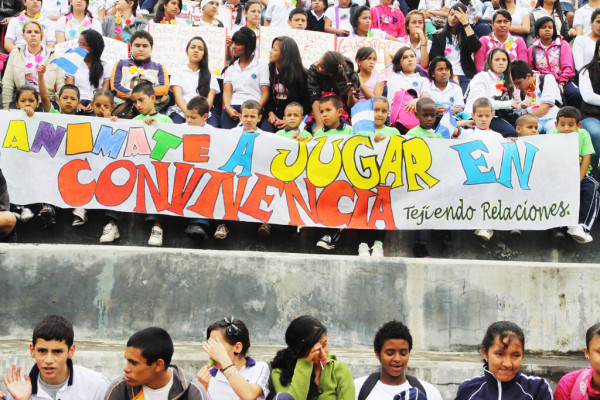 Ms. Goéz is also a representative of the Coordinación Colombia Europa Estados Unidos (CCEEUU), the main network of some 245 Colombian human rights and nongovernmental organizations.