New York Feb 25 2015 – The United States is trying to impose a strong investment pact within two big, so-called “partnership” agreements that are now being negotiated, one bridging the Atlantic, the other the Pacific. But there is growing opposition.

Joseph Stiglitz, Nobel Prize-winning Economist, Columbia University professor, former chief economist of the World Bank, and author of many books, spoke on the TPP (Trans-Pacific Partnership) in Jackson Heights, Queens during a community event organized by the Communication Workers of America, the Working Families Party, and community leaders. 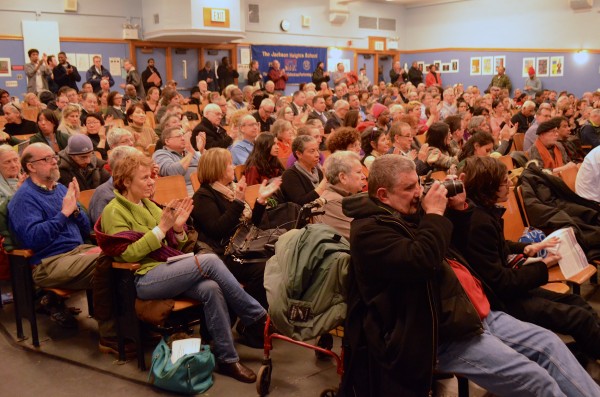 The TPPP is going to be about regulation. Corporations on both sides of the Pacific have an interest at lowering regulatory standards that protect the environment, protect consumers, protect workers, and protect health. Corporations are pushing an agenda that will increase corporate profits at the cost of the well-being of people on both sides of the Pacific. One example concerns access to generic medicines. The huge disparity between the cost of production and what is being charged by pharmaceuticals used to be just for AIDS drugs but it is common for cancer drugs, among others. This agreement will make it more difficult to access those life-saving drugs.

Another example is regarding provisions that have nothing to do with trade. They are called investment protection, or investment agreements. They’re sold under the guise of protecting property rights and making the economy more efficient. The US is trying to include the same thing in an agreement with Europe but Europe’s reaction is: “What are you talking about? We have as strong property rights as you do in the United States.” It truth, it is not about property rights and the very fact that we’re putting it in the European agreement demonstrates that. What it is really about is undermining regulatory protections. The Uruguayan president raised this issue in a meeting with Obama recently. Uruguay has been concerned about the impact of cigarettes on the health of their citizens. Cigarettes cause health problems, which take up a lot of resources, so the Uruguayan government has implemented a campaign to get people to stop smoking, an action praised by the WHO. Now Philip Morris is suing Uruguay under an investment agreement because the effort interferes with their “basic right” to sell products that kill people.

The U.S. trade representative is very reluctant to make the actual text of what is being negotiated public, even to Congress (and we’re talking about a democracy). WikiLeaks released the draft document, and now we understand why they do not want it seen, because there are provisions that are so adverse to health and environment.