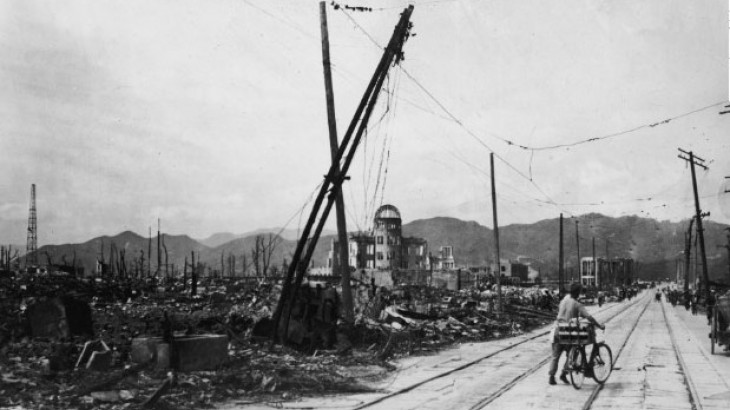 Speech given by Peter Maurer, president of the ICRC, to the diplomatic community in Geneva.

This year is the 70th anniversary of the atomic bombings of Hiroshima and Nagasaki – events that have left an indelible mark on humanity’s conscience and consciousness.

I was in Hiroshima last week. I visited the Peace Memorial Museums and spoke to hibakusha – survivors. 70 years after the nuclear bombs were dropped on these cities, the lives of the survivors, the lives of countless people in Japan, are still overshadowed by these two watershed events in the history of modern warfare.

This year’s 70th anniversary is a forceful reminder of the catastrophic and lasting human cost of nuclear weapons. It is a stark reminder of the incineration of two cities and their inhabitants. For the survivors, it is a reminder of the burns, blindness and blast injuries that went untreated because the medical infrastructure had been destroyed; of the slow and painful deaths; of the suffering endured by those who were exposed to radiation and 70 years later are still being treated for cancers and other diseases.

Seventy years ago, ICRC and Japanese Red Cross staff worked in unimaginable conditions to aid the victims and relieve the suffering caused by the atomic blasts. But how could we treat victims when hospitals had been reduced to rubble and ash and their medical supplies contaminated? The Japanese Red Cross Hospital, 1.5 kilometres from the hypocentre of the Hiroshima bomb, was somehow still standing after the explosion. There, doctors and nurses from the Japanese Red Cross did what they could. But it was clearly not enough to alleviate the suffering of those affected by the blast.

Based on these experiences, the ICRC concluded as early as September 1945 that the humanitarian consequences of nuclear weapons were simply unacceptable. From a humanitarian perspective, nuclear weapons should be abolished. Later, the ICRC, along with the broader Red Cross and Red Crescent Movement, called on States to reach an agreement to prohibit nuclear weapons.

Nuclear weapons are often presented as promoting security, particularly during times of international instability. But weapons that risk catastrophic and irreversible humanitarian consequences cannot seriously be viewed as protecting civilians or humanity as a whole.

Throughout history, humanitarian disasters have often been the catalyst for the adoption of new laws to prevent further suffering, deaths and atrocities in war. One such example was the use of poison gas in the First World War, which led to the adoption of the 1925 Geneva Protocol and the subsequent banning of chemical and biological weapons.

Yet today, 70 years after Hiroshima and Nagasaki – names that recall humanitarian disasters like no other – clear progress towards the prohibition and elimination of nuclear weapons is lacking. Nuclear weapons are the one weapon of mass destruction on which we are still confronted with a legal gap.

We recognize the efforts that have been made and the fundamental importance of the Treaty on the Non-Proliferation of Nuclear Weapons (NPT) and all the commitments it contains, as well as other efforts to advance nuclear disarmament. But in light of the potential humanitarian consequences, progress in the field of disarmament is, as of now, insufficient.

Five years ago my predecessor forcefully reiterated the ICRC’s call for the non-use and elimination of nuclear weapons. The UN Security Council Summit and the US and Russian presidents had the previous year committed to “create the conditions for a world without nuclear weapons.”

We were heartened that in May 2010 all NPT States Parties recognized, for the first time, the “catastrophic humanitarian consequences of any use of nuclear weapons” and that nuclear-weapon States Parties committed to accelerating progress on the steps leading to nuclear disarmament and to undertaking further efforts to reduce and ultimately eliminate all types of nuclear weapons.

I have invited the diplomatic community back here today because the ICRC is gravely concerned that these undertakings are at risk.

The Review Conference will have before it extensive and, in some areas, new information on the humanitarian consequences of nuclear weapons. Thanks to the conferences held in Oslo, Nayarit and Vienna, the international community now has a much clearer grasp of the risk that nuclear weapons might be used or accidentally detonated and the effects that such an event would have on people and societies around the globe, as well as on the environment.

These conferences have confirmed and expanded what the ICRC learned from its experience in Hiroshima. Here are some of the key points that we take away from these meetings:

In reality, the growing number of States that possess nuclear weapons and the potential for non-State actors to acquire them or related materials increases the risk of both deliberate and accidental detonations. The fact that an estimated 1,800 nuclear warheads remain on “high alert” status, ready to be launched within minutes, further amplifies those risks. Calls since the end of the Cold War to reverse such policies have unfortunately gone unheeded.

The information acquired since the last NPT Review Conference has increased the ICRC’s concerns about nuclear weapons. In our view, these findings have significant implications for the assessment of nuclear weapons under the fundamental rules of international humanitarian law. The new information about the health and environmental effects and the absence of an adequate assistance capacity in most countries should trigger a reassessment of nuclear weapons by all States in both legal and policy terms.

Already in 1996, in response to the Advisory Opinion of the International Court of Justice, the ICRC concluded that “it is difficult to envisage how any use of nuclear weapons could be compatible with the requirements of international humanitarian law.”

The evidence that has emerged since only strengthens these doubts. With every new piece of information, we move further away from any hypothetical scenario where the humanitarian consequences of the use of nuclear weapons could be compatible with international humanitarian law. This leads us, time and again, to the conclusion that the use of nuclear weapons must be prohibited and the weapons eliminated altogether.

The ICRC believes that reducing the risk of nuclear-weapon use and ensuring their elimination through a legally binding international agreement is a humanitarian imperative.

Significant steps have already been taken. States with the largest stockpiles of nuclear weapons have, since the end of the Cold War, significantly reduced the number of warheads that they possess. The 2010 New START treaty will further reduce the number of deployed nuclear weapons. Important steps have also been taken to increase security for nuclear materials. 115 States have signed treaties establishing nuclear-weapon-free zones and nearly all countries have committed to refrain from testing nuclear weapons by joining the Comprehensive Nuclear-Test-Ban Treaty or by establishing moratoria on nuclear testing.

However, other trends since 2010 give reason for grave concern. There is no evidence of negotiations for “rapid reductions” of nuclear weapons and even fewer signs of momentum towards their “total elimination.” Reports that the pace of reduction of nuclear arsenals has slowed and of the modernization of nuclear weapons by some States raise concerns that their role in security policies is not actually being reduced and may provide incentives for proliferation.

The 70th anniversary of the first use of nuclear weapons is the moment to signal that the era of nuclear weapons is coming to an end and that the threat of these weapons will be forever banished. It is the time to draw legal, political and operational conclusions from what has been learned about those “catastrophic humanitarian consequences” that States party to the Non-Proliferation Treaty recognized five years ago.

In 2011, the Council of Delegates of the International Red Cross and Red Crescent Movement appealed to all States “to ensure that nuclear weapons are never again used” and “to prohibit the use of and completely eliminate nuclear weapons through a legally binding international agreement, based on existing commitments and international obligations.”

I echo that call here today. The ICRC also appeals to States to fulfil the commitments contained in Article 6 of the NPT by establishing a time-bound framework to negotiate a legally binding agreement – and to consider the form that such an agreement could take. The catastrophic humanitarian consequences of nuclear weapons and current trends are too serious to ignore. The prohibition and elimination of these weapons through a legally binding agreement is the only guarantee that they will never be used again.

States Parties should make the NPT Review Conference this May a turning point for decision-making and progress in this area.

Until the very last nuclear weapon is eliminated, more also needs to be done to diminish the immediate risks of intentional or accidental nuclear detonations. We call on States that possess nuclear weapons and their allies to take further concrete steps to reduce the role and significance of nuclear weapons in their military plans, doctrines and policies. We urge nuclear-armed States to reduce the number of warheads on high alert and to be more transparent about action taken to prevent accidental detonations. Many of these steps derive from long-standing political commitments and multilateral action plans and should be followed through as a matter of urgency.

Protecting humanity from the catastrophic humanitarian consequences of nuclear weapons requires courage, sustained commitment and concerted action. Today’s complex security environment highlights both the challenges and necessity of such action. Nuclear weapons are often presented as promoting security, particularly during times of international instability. But weapons that risk catastrophic and irreversible humanitarian consequences cannot seriously be viewed as protecting civilians or humanity as a whole.

We know now more than ever before that the risks are too high, the dangers too real. It is time for States, and all those of us in a position to influence them, to act with urgency and determination to bring the era of nuclear weapons to an end.