The United Nations Special Rapporteur on extreme poverty and human rights, Philip Alston, on 17 December 2014 urged the World Bank to recognize the central importance of human rights to its draft environmental and social policies, also known as safeguard policies, which apply to its investment project financing.

In a joint letter to World Bank President Jim Yong Kim, Alston and 27 other rights experts highlighted specific concerns with the proposed new safeguards policies, which were released by the Bank in July for public consultation, as part of the multi-stage review.

“The draft safeguards seem to go out of their way to avoid any meaningful references to human rights,” Alston stressed in a news release.

“The Bank’s position is effectively a sleight of hand,” he noted.
Increased Reluctance to Engage with Human Rights

“They insist that their operations will be ‘supportive of human rights’ but then add that this must be ‘in a manner consistent with the Bank’s Articles of Agreement,’ and they have interpreted the latter as preventing human rights being taken into account because they are inherently political.”

According to the expert, Bank officials have defended its increased reluctance to engage with human rights on the basis that alternative sources of development financing are emerging, which do not require meaningful safeguards.

“The failure of other lenders to require that projects they fund should protect human rights standards is not a valid reason for the Bank to follow suit,” Alston said. “The risk of a race to the bottom is real and would be disastrous for sustainable development. 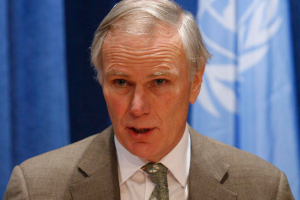 “I believe that honouring this promise requires a significantly different approach from that which is now being pursued by the Bank. The draft is a backward step that tramples upon the progress achieved over the last thirty years or so.”

The UN experts noted that the draft safeguards also fail to meet the standards that international human rights law sets, for instance in the area of labour and working conditions, involuntary resettlement and indigenous peoples.

In addition, many vulnerable groups, such as lesbian, gay, bisexual, trans/transgender and intersex people as well as people with a physical or mental disability, remain virtually unprotected in Bank projects.

The UN Special Rapporteurs are part of what is known as the Special Procedures of the Human Rights Council. They are independent from any government or organization and serve in their individual capacity.