Blas Garcia Noriega, a small man who wears glasses, is thoughtful and vivid, especially when he talks about his activities with Servicio Paz y Justicia, or SERPAJ. Founded 40 years ago in Medellin, Colombia, SERPAJ promotes nonviolent resistance and peaceful conflict resolutions throughout Latin America.

“SERPAJ is not an NGO, but a social movement,” Garcia said. “We are doing big things with little resources.” In words like these, it is possible to hear the challenges of this kind of work and the pride he takes in doing it. Peace activists like Garcia who oppose all forms of violence — whether from the state, guerrillas, drug sellers or other militias — are caught between many armed groups in Colombia.

Among the efforts SERPAJ supports is the Alternative to Violence Project, which works to address all forms of personal violence and is being implemented globally, especially by Quakers. Wherever it operates, however, the cultural and political backgrounds of the people it works with are always considered.

“Of course these people have never heard about Gandhi or Martin Luther King before,” Garcia said with a smile, referring to the fact that many are too poor to have received a proper education. “But they know the spiritual background of nonviolence, the unity and equality of people and the harmony with nature. So, it is not that we teach them, but we learn from them.”

Violence is a tool that is used on every level of society and it creates trauma in victims and culprits alike. “This is the reason why we are working with all of them,” Garcia said, “and also go into prison to heal the culprits.”

For SERPAJ, nonviolent means of conflict resolution are not only important for personal life, but they are the most effective means for resisting political and economic repression. “We have learned from Jean Goss and Hildgard Goss-Mayr [from the International Fellowship of Reconciliation], from the theologians of liberation and from many indigenous and campesino movements that only nonviolent resistance could lead to a better future for the population,” said Anna Juanche, a coordinator for SERPAJ. “Goss-Mayr has told us that revolutionary activities should be nonviolent in order to break the spiral of violence, of reaction and counter-reaction.”

On the other hand, Juanche explained that the experiences of social movements with political power have shown the people that they cannot trust politicians, even when they have risen from social movements, like the governments of Brazil or Bolivia. People must always engage in the difficult work of changing themselves and their society. “Nonviolence is a way of life, not just a tool,” declared Garcia.

Learning nonviolent means of dealing with conflicts and overcoming trauma, mistrust and feelings of guilt takes a long time. In cities like Medellin, most people live in harsh conditions and struggle for survival. Mistrust is a consequence of criminality and a trigger for continual violence. “We have to break this circle,” Garcia said. “Building trust in oneself and others is the first step that we go into in our basic trainings.”

Working against violence usually involves talking about personal experiences — about influences of families and peer groups — and about social injustice that often is the root cause of violence. What is important is sharing stories so that people do not feel alone and recognize that they can connect to others with similar experiences. And sharing personal experiences means breaking through mistrust in others and creating a sense of community.

Although SERPAJ’s workshops deal with very serious and emotional experiences, they have their elements of joy and togetherness. “We are working with exercises in teams and trust building,” Garcia explained. “And we are using elements of Theater of the Oppressed by Augusto Boal. Loosening up is important to get into the mood of sharing personal stories.”

In daily life, communication is important for preventing violent conflicts. Therefore learning about the unintended results of certain forms of verbal or non-verbal communication is a necessary tool. The next step during the workshops addresses this need by focusing on healing trauma.

“Here victims are dealing with the traumas that violence has caused them, but culprits also are confronted with the stories of victims,” Garcia said. Culprits are not blamed, but invited to let themselves into the stories of victims, and then to explain why they have acted violently toward others. “Usually, at the end of the workshop, there is a ritual of remission between people and an oath to treat other people with respect.”

People will not change the society if they have not changed themselves and their attitudes and mode of communication, Garcia said. 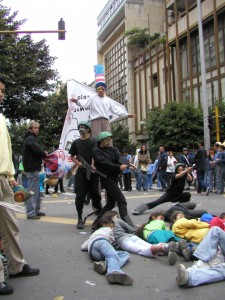 [/media-credit]A demonstration against militarism and conscription and for nonviolence in Bogota, Colombia.

Activists like Garcia are not just engaged in workshops, but also doing explicitly political work. He vividly recounted creative activities against militarization in Medellin. When the Colombian military does its regular marches on July 20, the country’s independence day, SERPAJ and other groups working against militarism organize their own “March for Life” with music, dance and puppets against conscription and the forced recruiting of youth. They have used forms of theater in the metro of Medellin to initiate discussions about violence or militarism.

SERPAJ Colombia has supported conscientious objectors and the peace communities of San José Apartado, who fight for the right not to be drawn into the conflict by any armed groups. It also offers workshops on nonviolent action, observes peace processes and demonstrations in order to prevent them from turning violent, and is engaged in peace education.

How Latin America has changed

Since the transitions to democracy and election of leftist presidents throughout South America, the region appears to have improved, explained Patricio Labra Guzmán from Chile, the coordinator of SERPAJ Latin America. But the dictatorships forced countries to implement neoliberal economic policies, which many of these progressive governments have largely continued. “The World Cup in Brazil is the best example of this,” Guzmán said. “Billions of dollar went to a corrupt FIFA and multinational corporations.”

On the other hand, social and land conflicts are vibrant, especially in Paraguay. In 2012, indigenous communities in Curuguaty were evicted from their ancestral lands by force because an agro-industrial company claimed the land for itself. Eleven people and six policeman were killed during the eviction. Some small farmers went on hunger strike in December 2012, after being arrested and presumably tortured by police. In February 2014, with their legal case still unsettled, five peasants accused of taking part in the deadly clashes in 2012, began another hunger strike in jail. “We were supporting them, because in a state of injustice you might need an extreme and painful action of hunger strike to achieve a life of dignity and freedom,” Labra said. On April 13, they ended their 58-day hunger strike, after they were taken to house arrest.

While this marked a small success, an even more significant victory was won in June 2014, when the president of Paraguay returned over 34,000 acres of ancestral land to the indigenous Sawhoyamaxa community after positive decisions in both chambers of parliament and years of conflict.

“There are some steps forward,” Labra said, “and some backward in Latin American politics.”