With these words, President Rafael Correa responded to today’s question by Pressenza IPA during the press conference held with members of the foreign press. The question revolved around the new production model and its contribution to the direction that President Correa has permanently given to many of the economic policies of the government of the citizen’s revolution: the human being above capital. 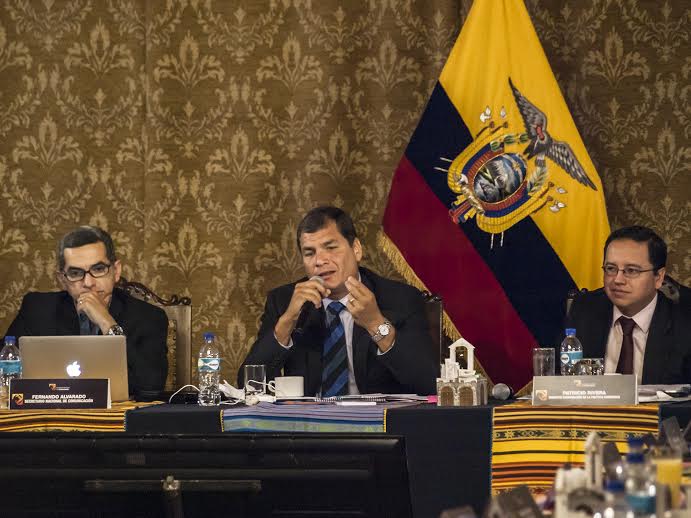 “We do not fool ourselves, there will be no social policy that lasts over time, without a good material base to support it,” he said and explained, succinctly, what were the three main stages of his government. In the first one the emphasis was on institutional reform that would change the power relationships and that is reflected in the 2008 Constitution. In the second, the emphasis was on restoring people’s confidence and for this, the effort was concentrated in health, social inclusion, education, labour progress and many other social policies that have come a long way.
Now, in this third stage, it is necessary to “ensure the sustainability of this new institutional and social policy for the human being, the popular State has defeated, but not quite yet completely, the bourgeois state.” Correa said it is necessary to look to the productive base “but also to humanism, not to neoliberalism: free wages and a competition based workforce. No, we must do new and better things.”

The president warned of the danger of “incompetent voluntarism”. “Humanism without vision, without technique, can lead to disaster. We can be humanistic but very pragmatic. No social policy can be maintained over time without adequate material base and that should also keep those humanist traits”, said President and summarised the direction of the new production model with these words: “making new things, better things, with a higher added value, higher wages, better living conditions of our working class, achieving social surplus to sustain the social gains we’ve made over the years and ensure people’s rights under our constitution and the practice of our government.”

When asked about the process of negotiations with the European Union, Rafael Correa said negotiations are ongoing and, as expected, difficulties have arisen in trade relations. This process began with a template even tougher than NAFTA and Ecuador resisted this demand. The European Union has relaxed and so we have returned to the negotiating table but “we have red lines that we are not willing to cross.” This is an art, the president said, “between liberalisation of our economy to bankrupt it, or protectionism to promote inefficiency.”

Regarding Inter-American Human Rights the President emphatically stated that it was “unseemly that the headquarters of the Inter-American Commission on Human Rights is in a country that has not signed the Pact of San José. It just has a name: neocolonialism”. Ecuador will continue to shout from the rooftops what it thinks, keep its principles, “it’s not about winning or losing, it’s about our sovereignty and therefore we do not discard getting out of that system.” The president expressed the desire and interest to advance new integration processes, because the bodies and mechanisms in Latin America “do not need foremen.” We need our own space to process and resolve our conflicts without “having to go to Washington to discuss them.”

Moreover, Rafael Correa acknowledged that at this time there are tensions in the relationship between Ecuador and the United States and stated that, from his point of view, there is an awkward policy from that country towards Latin America and, in particular, towards progressive governments. The president strongly criticised the use of cooperation funds from USAID (agency which is no longer operating in Ecuador), the attacks and breaches of international law and human rights, practices of espionage and, in short, double standards in international politics: “We’ll never renounce our principles, if that strains relations with the United States, that’s a shame”. In a related issue, President Correa has already confirmed the report regarding the military presence in the U.S. Embassy and its number (about 50) and that the government of Ecuador is taking action. Moreover, the President reported that the Ecuadorian government received no explanation from the U.S. Embassy in the country about the CIA involvement in the attack on Angostura, because it was “an intelligence issue”; another element that has strained bilateral relations.

On other issues, the president made a positive assessment of the impact of “The Black Hand of Chevron in Ecuador” campaign, while still facing many obstacles to make this company accountable for the damage in the Ecuadorian Amazon. He referred to the election of Pope Francis as “a great hope”; he touched on the asylum given to Julian Assange and his situation stating that the solution is only in the hands of Britain or Sweden; and the mutual cooperation with Cuba was a subject highly valued by President Correa. In relation to drug trafficking President Correa admitted the failure of the control strategies that have been carried out and the need to analyse all the alternatives.