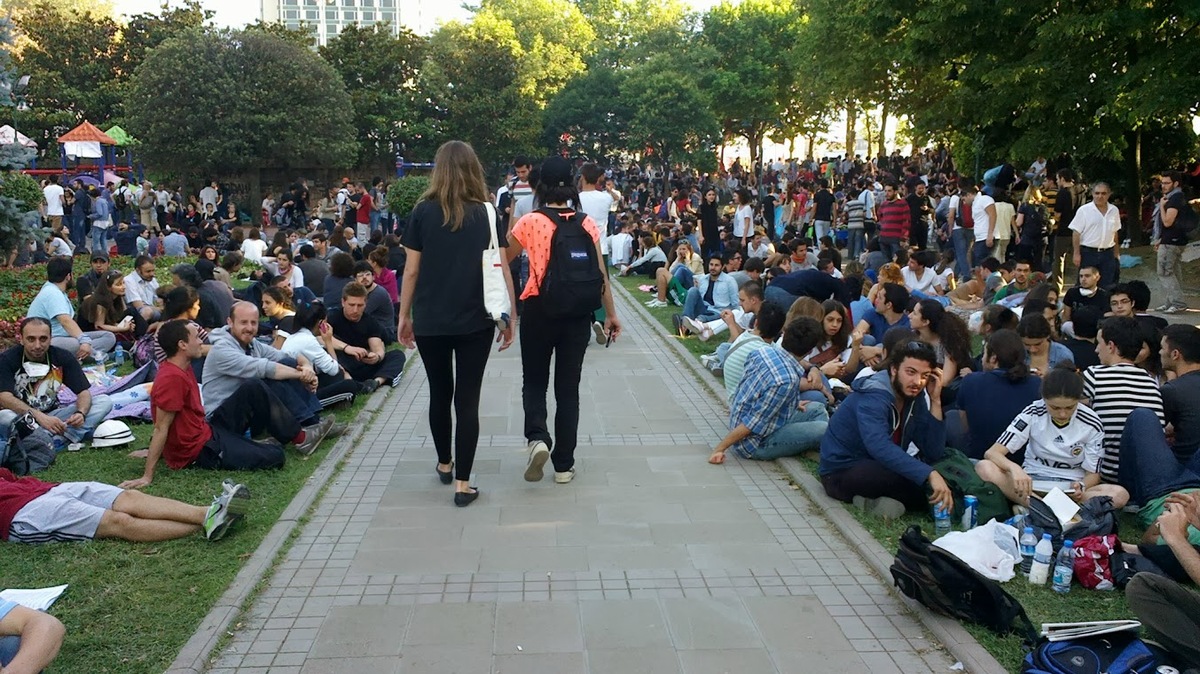 The ‘occupation’ of Taksim Gezi Park in response to the clear-cutting of trees was transformed into a country-wide, anti-government ‘movement’ due to disproportionate police violence. The ‘happening’ went into the annals of republican history as the largest-ever social movement in terms of the number of participants, geographical reach, duration and radicalism.

There might have been a carnival atmosphere in the park, but the streets continued to be the site of violent clashes; in every corner of the country. Solidarity protests were launched around the world.

The movement continued well into the past six months with “neighborhood forums” operating according to the principles of direct democracy, as well as organizing anti-government marches. Now, regardless of whether people supported or opposed the movement, everything in Turkey is conceived in the context of pre- and post-Gezi.

“This is just a beginning, the struggle continues!”

This slogan, which was previously chanted in protests against the sacrifice of urban heritage and public space on the alter of the neo-liberal market, became the motto providing direction to the movement. The evening when the police ‘evacuated’ the park for the second time in mid-June proved to be the beginning of a new phase of the movement, not an end thereto.

The police ‘attacked’ the park during an event staged by the Confederation of Progressive Trade Unions (DİSK), in commemoration of the General Strike of June 15-16, 1970. Even though some thought the ‘evacuation’ would end the movement, the resistance metamorphosed, starting with the #standingman, who stood for hours in Taksim Square in silence. #Standingman might have been immobile, but his movement rapidly spread around the country, as #standingpeople soon began standing their ground against authority everywhere. The #standingpeople protests bought some time for the movement to think.

Activists soon occupied the parks in their neighborhoods with inspiration from the “Everywhere is Taksim, Everywhere is Resistance” slogan. Where tents were pitched in Gezi Park, they were now pitched in local parks – soon to be accompanied by forums, concerts, libraries, seminars, free food, swap markets and the like. Relying on their self-confidence to stand against those in power, activists took to the forums to popularize the spirit and ethics of the Gezi resistance. Ultimately, the forums pointed to a more mature phase of the movement.

In the forums, distinct political formations became familiar with each other, producing a mutual impact. All the forums had their own social media accounts, while some broadcast via radio or TV over the internet.  The events served to destroy the bias against Kurds, while different and previously antagonistic sects paid reciprocal visits to their respective religious services.

Whilst activists of all ages engaged in communication via computers and mobile devices, the government ‘did its part’ to bring people onto the streets by constantly providing new reasons to protest.

Clear-cutting trees at Ankara’s Middle East Technical University (ODTÜ) for highway construction went hand in hand with brutal police violence against students that erected a camp to stop it… Discriminative and insulting comments from government spokespeople directed toward Alevis and women… The prison conditions of Gezi detainees… Torture in custody… Unlawfulness in cases regarding those killed in the protests … Employees were fired, students received disciplinary punishment for participating in the protests… Investigations were launched against medical doctors who helped those wounded in the resistance… The Syria policy of the government… All the actions sent – and have continued to send – the neighborhood forums pouring onto the streets.

During the protests, one of the most discussed issues was the identity of the activists. Who could have erected such huge barricades? Who could have shouted slogans that made even doyens of the literary world jealous for their wit? Who were those people who fearlessly stood against the police and refused to disperse despite the tear gas and water cannon?

According to a study on Gezi Park conducted by a major research company in Turkey, the average age of the participants of the movement was 28, with 56% university graduates, 37% students, and 52% employees. An investigation conducted by the police on detainees reported that 55% of the suspects had a monthly income of less than TL 1,000 (€335), while 85% earned less than TL 2,000 (€670).

The protesters are from all ages, religious sects, ethnic origins, and income levels. It is hard to say that the movement has a clear identity. However, a significant part of the masses are composed of urban workers, who make a living by selling their labor force. Unemployed segments of the working class, as well as students receiving an education to become a part of the working class, were also among the protesters.

The fact that most of those killed in the protests were workers, that more than half of the activists were women and that football fan groups were linchpins in the protests, coupled with the fact that  violent clashes took place in renowned working-class neighborhoods, provide overwhelming evidence that workers and the poor were of paramount importance to the movement.

The mass media peddled the idea that the activists were all well-educated, young, white-collar and middle class. This carefully crafted image was designed to manipulate the profile of those protesting. Class-belonging is not determined by consumption habits, income level, or education, but by the place held within the production processes in the economy.

The size of the global working class in the history of capitalism has reached its highest ever in terms of population ratio. There is considerable discontent among workers. Measures to limit the benefits of the social state, along with rising unemployment, policies that deprive workers of social security and the policies of oppression and surveillance, have all triggered massive reactions by workers.

The new generations of the working class can rapidly communicate among themselves. A quickly written email and a photograph shared without comment – instead of official correspondence between unions – can act as a catalyst for an international campaign.

During the Gezi Movement, such segments of the working class were up all night at the protests instead of spending their annual holidays at a beach resort. They preferred solidarity instead of the ethos of cutthroat competition they had been taught to internalize since school, and anonymous heroism instead of the desire to become the corporate ‘employee of the month.’ From engineers to customer service representatives, from welders to teachers, those white- and blue-collared workers prepared meals and erected barricades together.

Everyone is asking questions such as “What about the elections?” Answering the questions is nothing more than an attempt at shoehorning a new social movement into ‘old school’ politics. Nevertheless, one can say that society has already changed.

The attitudes and preferences of the activists have changed. For instance, a woman will no longer grit her teeth and bear it if subjected to sexual abuse on a bus. She’s more likely to shout at her harasser and give him an almighty slap in the face.

The language of the movement, which displayed sexist terminology at the outset, was transformed upon the intervention of feminists. The protests and forums have also become venues where LGBTI people could feel at ease.  One of the old slogans of the women’s movement in Turkey, “We will not abandon the nights and the streets!” became reality during the protests: Women walked out of their houses and entered into all the spaces said to “belong to men,” night after night.

The workers participating in the protests seek to become a member of unions and assume responsibilities. In union protests, one no longer just hears slogans that were chanted during the labor struggles of the 1970s or 1990s, but Gezi slogans as well. Customized Gezi slogans are now being transformed for strikes.

Members of the neighborhood forums pay visits to strikers in their areas. For example, a clothing factory occupied by workers who were not given their severance, is continuing production without the bosses, while their output is sold at forums.

Having assumed from time to time the role of spokesperson for the movement, unions engaged with segments of the workers that they never represented. They have become familiar with rapidly developing forms of democracy.

The ‘overwhelmed’ masses, the majority of whom are composed of paid employees, displayed a reaction against the government, which had intervened in citizens’ lifestyles and whose unlawful policies were based on unequal growth and development. This reaction showed us that class struggle was not a phenomenon to be relegated merely to the workplace, but also in the urban sphere and daily life.

After a religious community and erstwhile ally of the government fell out with the ruling Justice and Development Party (AKP), a series of bribery and corruption scandals emerged. These triggered the resignations of ministers, the dismissal of a number of police officers and protests against corruption. As such, we can say that the third phase of the movement has now started.

The government refused to permit the celebration of May 1st in Taksim Square in 2013, suffocating the entire city with tear gas a month before the beginning of the Gezi events in what became a rehearsal for the pièce de résistance in the park.

Gezi Park is ultimately about celebrating May Day every day and everywhere!

(*) Kıvanç Eliaçık is the Director of the International Relations Department of the Confederation of Progressive Trade Unions of Turkey (DISK).

Pressenza Turkey
News coming from our correspondents in Turkey