By IRIN*, Athens – Three police officers in body armour surround two dark-skinned men on a busy street in Athens, Greece’s increasingly restive capital. It is a scene that has been playing out across the city since the launch of a government crackdown on illegal migration two months ago. 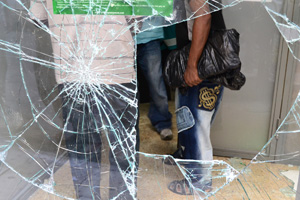 [/media-credit] Vandalised offices of the Tanzanian Community Association in Athens.

The police operation – ironically codenamed Xenios Zeus, after the Greek god of hospitality – has so far rounded up over 36,000 migrants, 9 percent of whom have been detained for lacking legal documents, contributing to an atmosphere of fear and desperation in neighbourhoods with large migrant populations.

“Even if you have full documents, they arrest you,” said Kayu Ligopora, a Tanzanian who has lived in Greece for three years.

“We all feel insecure since the elections, and the worst is when you have problems, you don’t know where to go. If you call the police, they ask for your documents.”

Ligopora is secretary of the Tanzanian Community Association, the offices of which were raided and smashed to pieces by a mob of club-wielding men and women the night before he spoke to IRIN. Neighbours helped the mob break through the reinforced glass windows after police led away some of the group’s leaders, but failed to make any arrests.

Many of the vandals were wearing the signature black T-shirts of extreme right-wing political party Golden Dawn, which received a record number of votes during the June elections; it now holds 18 seats in the Hellenic Parliament. The party’s popularity has risen in tandem with Greece’s plummeting economy, which its leaders have successfully blamed on a surge in illegal migration in recent years.

The perception that migrants are responsible for worsening crime and an unemployment rate of nearly 25 percent has gained traction, particularly in areas of central Athens that have become virtual ghettos for poor migrants. There is widespread popular support for the police’s efforts to “clean up” these areas, according to Nikitas Kanakis, director of the NGO Médecins du Monde (MDM) in Greece. 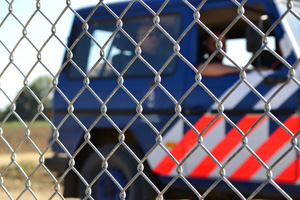 “The fascist party [Golden Dawn] has put the agenda on the table and everyone’s following it, but there is no real plan beyond, ‘Let’s clean the streets’,” he told IRIN from MDM’s offices in the Omonoia neighbourhood, where the organization offers free medical care, social services and legal advice to migrants and impoverished Greeks. “They’re trying to push them out of the centre [of Athens], put the problem out of sight; but the problem remains.”

About 2,200 migrants found without documents have so far been deported or opted for voluntary repatriation through a programme of the International Organization for Migration. Limited space in detention facilities means that the rest are usually released after a few days or weeks; they are issued a paper that gives them seven days to leave the country. The paper is written in Greek, and many migrants cannot read it, let alone act on it.

With much stricter controls at major ports like Patras, where migrants used to stowaway on ships bound for Italy, only those who can afford to pay smugglers or buy forged EU passports stand much chance of leaving. The rest are trapped in a cycle of arrest, detention and release that Kanakis described as “a waste of resources and lives”.

Hamid, a 16-year-old Afghan refugee from Iran whose family paid smugglers US$5,000 to get him to Greece 15 months ago, twice attempted to hide in trucks bound for Italy from Patras. Both times, he was discovered by police who beat him so badly he required hospital treatment. “They beat me like they wanted to kill me,” he told IRIN, speaking through a translator.

Now Hamid spends his days doing the rounds at Athens’ soup kitchens. At night, he sleeps in Pedion Areos Park, where he is regularly awoken by police. “If they find migrants sleeping in the bushes, they beat us,” he said. “Sometimes they arrest us, sometimes they just tear up our documents.”

The rise of Golden Dawn has been accompanied by a rise in violent attacks on migrants, the majority of which go unreported and unpunished. A monitoring network of NGOs, coordinated by the UN’s Refugee Agency (UNHCR) and the National Commission for Human Rights, recorded 63 incidents of racist violence between October and December 2011 in Athens and Patras; 18 of them were perpetrated by police officers. Ketty Kahayioylou of UNHCR described the figure as “just the tip of the iceberg”.

“People don’t always report incidents because they don’t feel it’s going to help them. The aim is to show patterns – when, by whom, which areas and how,” she said. “Usually it’s 10 to 15 people attacking one or two migrants, usually the most weak and vulnerable, even women and children.”

Amina Asadi, an Afghan migrant, was walking with three other women and their children in Athens when they were surrounded by five men and women wielding sticks. “We had children with us so we couldn’t run,” said Asadi, who has been stranded in Greece with her husband and three children since smugglers made off with their savings two years ago. “So we took off our shoes and closed the pram and threatened to hit them with it, and they ran away.”

Migrants who do attempt to press charges are told they must pay a fee of 100 euros. In a July report documenting the xenophobic violence, Human Rights Watch noted that there have been no convictions under Greece’s 2008 hate crime statue.

MDM’s Athens clinic treats migrants injured by racist attacks on a daily basis. Kanakis estimates they treated 300 such cases during the first half of 2011. “They are very scared,” he told IRIN. “We see more and more desperate people. Many were working on the black market, on farms or in factories, but now there are no jobs even like that.”

He added that health problems caused by migrants’ often grim living conditions, such as tuberculosis, were “creating a public health problem”.

MDM’s 26 doctors, as well as its nurses and psychologists, are all volunteers. “Not everyone is against foreigners,” said Martha Kouyia, a nurse at the clinic. “It’s politics.”

Report by IRIN, a humanitarian news and analysis, a service of the UN Office for the Coordination of Humanitarian Affairs. Go to Original.