This post is also available in: French, Italian, Portuguese

An interview with a marine biologist from Ecuador

Women’s contribution to science has historically not received due recognition. On this occasion we interviewed Ecuadorian marine biologist Patricia Castillo Briceño, who is also co-director of the EBIOAC Equatorial and Ocean Acidification (BIOMA, in Spanish) project and co-founder of the Ecuadorian Network of Female Scientists (REMCI).

REMCI is now a strong community for women scientists in Ecuador. It builds collaboration among women instead of competitiveness, raises awareness against sexual harassment in universities, and normalizes science as a career for girls and women.

Belen Febres: I’d like to start with the contribution your work has made. Can you tell us a bit about your research?

Patricia Castillo Briceño: I study how environmental factors change the functioning of marine organisms. I am currently looking at ocean acidification, which is a part of climate change. Ocean acidification is caused by excess CO2 generated by massive human use of fossil fuels, which in turn alters water chemistry and has repercussions for marine life.

Once I completed my graduate studies, I returned to Ecuador in 2014 and began applying what I learned to evaluate how acidification conditions affect Ecuador’s native species, including fish, mollusks, and crustaceans. This is very important because Ecuador possesses some of the richest marine biodiversity in the world. At the same time, these are also some of the most at-risk areas for ocean acidification. There is a lack of local data that limits our ability to respond to these risks, which is why I have dedicated much of my work to positioning the issue for research development and advocating for policy decision-making based on scientific evidence.

BF: How did you become interested in this topic and in marine biology in general?

Patricia Castillo Briceño: My interest began when I moved from my hometown of Quito in the Ecuadorian highlands to coastal Manta. There I discovered aquatic animals and the sea’s impressive, immense energy. This inspired me to study marine biology in Ecuador. I then traveled to Spain and France for my postgraduate and postdoctoral studies. I returned because my goal has always been to contribute to my country.

BF: Did you encounter any difficulties in this process?

Patricia Castillo Briceño: At first it was not easy being a foreigner living among other customs, lifestyles, and sometimes other languages, like in France and the UK. But these are enriching experiences and provide very high level opportunities for research. Starting the research investigation back in Ecuador was difficult because there was no one working on this issue yet, and there is limited access to funds and technology. It’s been gratifying for us, however, to be able to make relevant changes in public policy in this part of the country. 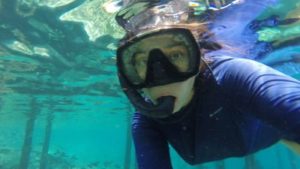 BF: You also created the Network of Ecuadorian Women in Science (REMCI).

Yes. Our initiative started in 2016 when a few scientists began a Twitter discussion about how badly Ecuador needed encouragement and recruitment for women’s participation in science, and how crucial it was to place this issue on the national agenda. We then saw that networking was one way to consolidate our efforts, so we created REMCI. These days we continue to expand and diversify our network, which is always from a place of sisterhood and with support to combat the patriarchal idea that women need to compete among ourselves to excel.

BF: Why a women’s network specifically?

Because being a woman matters a lot. It’s uncommon to hear of a girl who dreams of being a scientist, and this is because education and society establish gender roles very early. Your path is carved with what subjects you are taught,”compliments” you are given (telling little girls they’re pretty, instead of smart), and with female role models that are presented to you. I was lucky my mother is a biochemist, so I grew up playing with her portable microscope and knowing women can be in science. But I also grew up with the idea that there was only one route: You are born, you grow up, marry, reproduce (always in that order), and die. Until one day I asked myself “Well, why?” And decided to go my own way.

BF: What can we do to change these roles?

A lot. We can begin by inspiring girls at a young age to consider more options in life, and encourage them to study and advance in their career. We must make it clear that a path in science is not always easy, so when a young scientist encounters unsuccessful situations, she doesn’t think there’s something wrong with her or her work and gets discouraged. She instead must know that difficulties are a normal part of the process. We also need to bring inappropriate questions to public scrutiny so they’ll stop happening. For instance, let’s say you prepared for an interview with scientific and technical answers, but instead you’re asked if you plan on having children and what your husband’s opinion is about your work. Men are never asked things like this. Next generations shouldn’t have to go through this.

Public policies and formal education are also in dire need of structural change. National and international scientists should be featured in books. They aren’t mentioned, as if there weren’t any! In this way, we can ensure that both girls and boys grow up knowing that women are equally capable, and that our scientific work is just as important for the advancement of knowledge. In addition, we must equally share the unpaid labor of housework, traditionally the burden of women. It is absurd to lose half our world’s talent due to lack of gender equality, and even more so in countries like Ecuador where scientific research is sorely needed. That is a luxury we cannot afford. We need all of our brains working together.

Finally, museums and media must assume a key role in promoting different patterns of thought by making biases and injustices visible and by highlighting the work of women in different industries, including all branches of science.