This post is also available in: Italian, German, Hungarian

Opposition was strong for both women (63%) and men (60%) although men are more likely to favor use of these weapons (26%) compared with women (16%). Opposition to killer robots was strong across generations and steadily increased with age, from 54% for those under 35 to 69% for ages 50 to 74.

The survey, conducted in December 2020 by the market research company Ipsos and commissioned by the Campaign to Stop Killer Robots, indicates that even with COVID-19 and economic uncertainty dominating headlines in 2020, public awareness of and sentiment against the development of killer robots remains steady and strong.

In response to these findings, Mary Wareham, coordinator of the Campaign to Stop Killer Robots, said:

“States must launch negotiations to create a new treaty to retain meaningful human control over the use of force. Public opposition to killer robots is strong, which raises expectations of bold political action to ban them.”

Opposition to killer robots has increased since 2017

Opposition to killer robots increased in 13 of the 26 countries previously surveyed in 2018, with the biggest increases in Brazil (up 16% points from 2018), Israel (up 12%), Japan (11%), and South Africa (up 7%) followed by Australia and Sweden (both up 5%). This is the third Ipsos survey in six years to survey opposition to killer robots. The first survey conducted in 2017 found that only 56% of those surveyed opposed killer robots. By 2020, opposition increased to 62%. 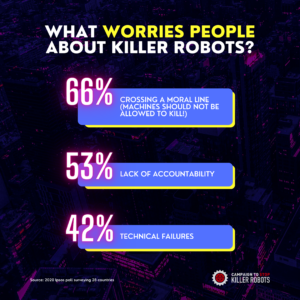 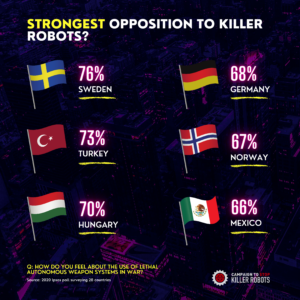 Notably, a majority opposed killer robots in five countries most active in the development and testing of weapons systems with decreasing levels of human control: Russia (58%), UK (56%), US (55%), China (53%) and Israel (53%).

All countries surveyed by Ipsos have participated since 2014 in diplomatic meetings on concerns raised by lethal autonomous weapons systems. Those talks have been stalled since November 2020, when the Convention on Certain Conventional Weapons (CCW) failed to agree on its program of work in 2021.

Stop Killer Robots
Formed by the following non-governmental organizations (NGOs) at a meeting in New York on 19 October 2012 and launched in London in April 2013, the Campaign to Stop Killer Robots is an international coalition working to preemptively ban fully autonomous weapons.