Fires at a reception centre for asylum seekers on the Greek island of Lesbos have left thousands of people without shelter. Around 13,000 people – including those from Syria, Afghanistan, Iraq and west Africa – lived at the Moria Reception and Identification Centre (RIC) in a space intended for just over 3,000. Most will have lost the few belongings and flimsy and insufficient housing they had.

Lesbos is now in an official state of emergency. Ships are being sent to help shelter those left sleeping on the roads outside the camp, some of which were blocked by police to stop people entering nearby villages. Meanwhile, there is confusion over how asylum cases will be progressed when many of the administration zones in the camp were also damaged by the fires.

This fire is just the latest in a number of tragic cases of fire and violence, as well as inhumane conditions, endured by those seeking asylum on the Aegean islands of Lesbos, Samos, Chios, Leros and Kos. It is a stark reminder of the failures of the current system and the need for change.

COVID-19 led to increased restrictions on the freedom of movement of those in the island centres, making already dangerous conditions a lot worse. While restrictions imposed across Greece in late March have now eased, the date for lifting the lockdown on the island centres continues to be pushed back. Other residents of the five islands and tourists have been free to meet for coffee, go to the beach, or go out for dinner, but RIC residents have had their freedom of movement restricted in scorching heat. They were left in unsuitable conditions, with limited access to sanitation, food and water. The risk of COVID-19 remains high, and 35 people tested positive in Moria before the fires.

Not a fair system

So what should the EU and the Greek government do now? The day after the Moria fire, the European Commission president, Ursula von der Leyen, said that the commission is ready to support Greece, and that its priority is “the safety of those left without shelter”.

Yet as recently as March von der Leyen thanked Greece for being Europe’s aspida (shield) because of its location at the EU’s border with Turkey.

A situation in which Greece is understood to be Europe’s shield, one which pushes the responsibility for migration and border policy to neighbouring states, is one that will inevitably lead to overcrowding in camps on the Aegean islands as well as lives lost at sea in the Mediterranean. So too will an approach that ignores offers by cities in the Netherlands to rehouse refugees as national governments continue to rely on Greece. Policies designed to push back, return or prevent people from entering Europe will not ensure genuinely safe and legal pathways for crossing borders.

The EU’s policy has allowed Greece to build closed detention centres on the Aegean islands and to speed up the asylum process by relying on non-specialist case assessors drawn from the police force. These measures do not guarantee a safe, fair and just system. Under international law people have the right to claim asylum, they also have the right to cross borders to be able to make that claim. To detain people without a time limit does not respect this. 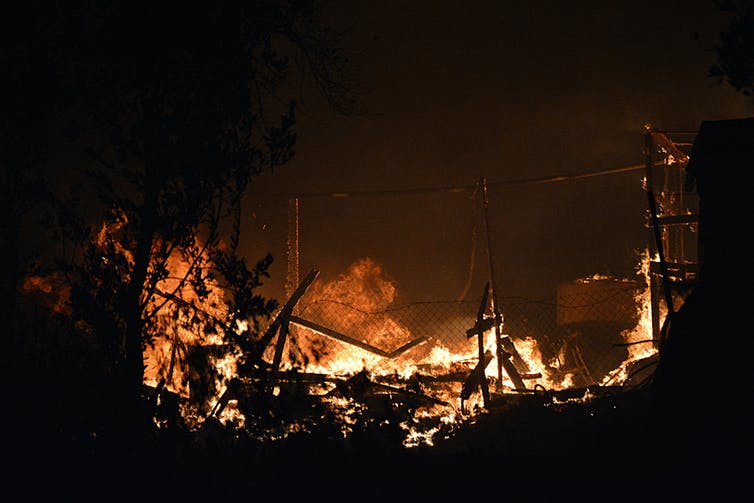 Thousands were left without shelter after fires at the Moria camp on September 9. Stratis Balaskas/EPA

Rebuilding Moria is not the answer

So what is the alternative? First, it is not to rebuild Moria. Neither Greece nor the EU can continue to rely on the five Greek islands as a space to hold people for months, often years, in unsuitable conditions.

At the start of 2020 there were 40,000 people housed on the islands – although collectively the RICs were built to support closer to 5,500. The numbers have decreased due to relocations of unaccompanied minors to other EU states and transfers to alternative accommodation in mainland Greece. But the current policy does not prevent the number of people stuck in the reception centres from going back up.

To genuinely change the conditions facing those claiming asylum requires a radical rethinking of the collective European response to asylum, one that recognises the positive outcomes of welcoming refugees.

Such a system relies on a rethinking of the rhetoric surrounding migration and refugees. Europe needs a new welcoming stance – one that is focused on offering people in vulnerable situations a chance at a stable life, the ability to work, to study and to have their rights to a family life protected. This means opening up rather than closing down borders. It means recognising that passports and place of birth are a matter of luck and nothing more. It means an end to the reliance on Lesbos, Samos, Chios, Leros and Kos as places where people’s lives are put on hold as they wait months for a decision on where they go next.

If this change doesn’t occur, if the islands remain overcrowded, reliant on detention, then tragically it is more than likely just a matter of time until the next disaster happens.