The feminist creators of the performance “A rapist on your way”, known as the Las Tesis group, were accused by the Carabineros of Chile of “intending to create hostility to the institution in question, with a direct accusatory note in.” primarily on repressive or encouraging repression against the physical integrity of the general population, in relation to alleged victims of police acts, in order to then complete the message of the video with clearly intimidating statements towards members of this institution ”. This happened after a video recorded by the group peacefully demonstrating in red suits, masks and a black Chilean flag in front of a police station was distributed in May.

Amid the full lockdown due to the pandemic, which is leaving permanent damage to the country not only in terms of the number of infected, sick and fatalities, but also in terms of poverty and unemployment, with characteristics of the most devastating economic crisis that has occurred in decades , the Carabineros institution had nothing more urgent to do than file a complaint with the prosecutor for “inciting violent acts against the institution”. 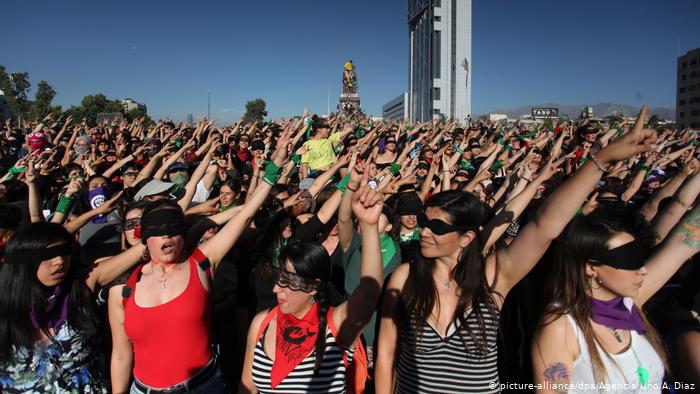 As a result, Las Tesis is now held responsible for some of the “acts of violence” that took place in the country during mass protests called “social revival” in October, November and December 2019.

Despite the fact that the trial is taking place “against all the culprits”, the full names of the four members of the group were then released.

In response, it didn’t take long for the group to receive massive statements of support from around the world, particularly via social media.

« No to the persecution of art, » underlines the photo published by “Adtreschile”, which of “Delight Lab”, an organization which expressed its social dissatisfaction through an artistic lighting project, project which consists in projecting sentences on buildings, sentences which express censorship and persecution of the victims.

“We, the network of Chilean actors, publicly express our support for the group @lastesis in view of the publicity placed by the Carabineros. It seems absurd and scandalous to us that the institution which has exerted direct violence against the population on the street Since October 18, beatings, shootings, tear gas massages, torture and sexual violence against women and girls have exercised the audacity to file a complaint against a feminist artistic collective for incitement to violence ”, have pointed out the members of the RACH (La Red de actresses chilenas).

“It is unacceptable that the Chilean Carabineros are concerned with persecuting an artistic group like Las Tesis instead of ensuring quarantine and security in the neighborhoods!” said the Mayor of the Argentinian community of Recoleta, Daniel Jadue.

“A world upside down: Carabineros who systematically commit human rights violations, shoot out eyes, torture, abuse, rape and kill have currently nothing better to do than accuse #LasTesis of inciting violent acts. Do you understand, @GeneralRozas, that you are the perpetrator of violence? ”Tweets Tomás Hirsch, a member of the Humanist Party in Chile.

“The government joins the persecution of Las Tesis. What shoud that? Do you want to take revenge on the feminists who denounced their authoritarian administration with global attention? And the Minister for Women? Will she act? You have our complete backing against this pathetic measure, ”said MEP Gael Yeomans.

#TodasSomosLasTesis (“We are all Las Tesis”) has become one of the most used hashtags and the movement continues to reach news from different places around the world. “While #LasTesis was invited to Argentina to give a lecture on art and activism as an international artist, @Carabdechile threatens and criminalizes her work in Chile, even though her work represents thousands of women,” said the editor of “Revista Sosa” , Carolina Olmedo.

Translation from Spanish by Chiara Pohl from the Pressenza volunteer translation team. We are looking for volunteers!

Translated from German by Lulith Van.