Despite the burning need to solve the major global problems together on the basis of cooperation, the industrial nations continue to rely on arms races and rivalry. The SIPRI figures clearly show the disproportionate nature of military spending – and the disastrous consequences for the environment, climate and now health are unmistakable.

The new figures from the Stockholm International Peace Research Institute were commented on and interpreted by the International Peace Bureau on Monday, after SIPRI published the latest data. Due to the global COVID-19 pandemic, the press conference was held online this year. The SIPRI figures were also assessed in the light of the current pandemic, which made it all the more apparent how the prioritization of military spending worldwide is in massive imbalance compared to sectors.

USA: Lonely at the top 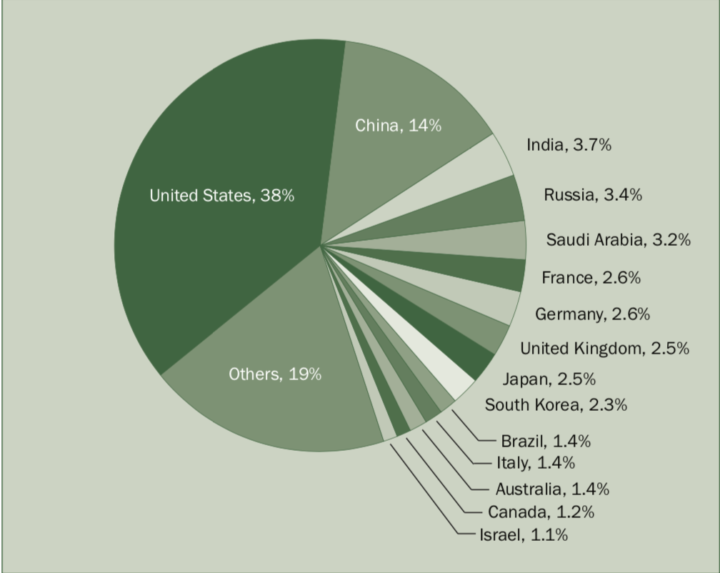 In 2019, global military spending reached another record level with an increase of 3.6 percent compared to 2018, continuing the global trend of arms races in recent years.

Tarja Cronberg, Fellow at SIPRI, interprets the increase and especially the spending of the USA, China and Russia – all among the top 5 – as proof of the increasing rivalry between the three major powers. With its arms budget, the USA alone accounts for 38% of global arms expenditure. Amela Skiljan, IPB coordinator, helps to break down the enormous sum of $1,917 billion in global arms expenditure in 2019, to help us grasp the sheer size: $1,917,000,000,000 per year means global military spending of $60,800 per second.

Germany came eighth, behind France and the UK, with a 10% increase in its budget compared to 2018. The 29 NATO states together account for almost half of all military spending worldwide, at $1,305 billion. Other major economic powers are also top of the list and almost without exception are recording an increase in spending in each country. In contrast, the largest declines show in African countries and some states in the Middle East, where military conflicts nevertheless continue.

Karin Vogler, politician for Die Linke (the Left) calls the new figures “frightening” and demands that there must be “a political discussion” about them. What is going to happen next? She labels Germany the “world champions in armament” and blames the German government’s striving for a military leadership role. But especially in times of the Corona crisis, Vogler emphasizes the need for a redistribution of German military spending and a rethinking of the Federal Government. The pandemic “shows the serious consequences if social and health care systems are not fully functional” when it is actually necessary to cushion the economic and social effects of the pandemic, fight poverty and provide infrastructure that meets the needs of the population. “We must not accept these horrendous military expenditures”, Vogler appeals and also points to the imminent hunger pandemic, which the United Nations World Food Programme has already warned of.

“With 13.5% of global military expenditure, every person on earth could have something to eat every day,” she says, once again highlighting the huge imbalance in expenditure.

After the Corona pandemic, a re-distribution battle is imminent. Germany must develop from a world champion in armament to a world champion in disarmament in order to initiate international rearmament and redistribution. Amela Skiljan agrees and emphasizes that military spending must be redistributed to areas such as infrastructure, education, health, social affairs and development.

As a representative of civil society, Michael Müller, Parliamentary State Secretary for the Environment, Naturefriends e.V., calls for a diverse peace movement and emphasizes that forces must be joined with social and environmental movements. An idea of cooperation, understanding and a policy of détente must be taken up: “Humanity needs bread, not bombs”, Müller quotes from the Pope’s Easter blessing.

Philip Jennings, Co-President of the IPB, shares a similar opinion: “It is time for global solidarity […] time for a peace movement. SIPRI’s dark and frightening figures must be followed by a lively, optimistic and ambitious response. Civil society must exert pressure and introduce the dimension of peace into the global discourse.”