Every year the IPB awards the Seán MacBride Peace Prize to a person or organization that has done outstanding work for peace, disarmament and human rights. These were the principal concerns of Sean MacBride, the distinguished Irish statesman who was Chairman of IPB from 1968-74 and President from 1974-1985. The award is decided by the IPB Steering Committee.

The recipients of this year are the All Okinawa Coalition Against Construction of New Base in Henoko, Noam Chomsky and Jeremy Corbyn. The Prize is a non-monetary one, consisting of a medal cast by the California-based company From War to Peace: “We recycle copper from disarmed nuclear missile systems to create Peace Bronze, the most precious metal in our world”. At this point, we would like to express our deepest appreciation for making and sponsoring the medals.

Two of the three recipients of the Seán MacBride Peace Prize already received the prize. The first Ceremony was held in Barcelona, where the All Okinawa Coalition Against Construction of New Base in Henoko was awarded. Without the help of Centre Delàs who helped us organize this event in the cooperation with the City of Barcelona, it would have not been possible to make such a successful event. We are deeply grateful for the given support.

Jeremy Corbyn received the prize in Geneva. We would like to express a sincere thank you to the City of Geneva for helping us organize the ceremony. The Ceremony with Noam Chomsky will be held in springtime 2018 in the USA.

All Okinawa Coalition Against Construction of New Base in Henoko

On November 24th 2017 Suzuyo Takazato and Hiroshi Ashitomi received the MacBride Peace Prize on behalf of the All Okinawa Coalition. The All Okinawa Coalition was honored the award for organizing the long-standing, committed and coordinated resistance of the Okinawan people against the new construction of the Henoko base as well as the closure of the Futemna Marine Air Base.

Joseph Gerson stressed out in his laudation “the Coalition’s steadfastness and exceptional range of nonviolent actions, the broad popular support it enjoys, and the spirit and dedication that characterize this exceptional anti-bases movement make it a model for peace and justice struggles and deserving of support and solidarity”. “70.6% of the US military facilities exclusively used by the US military in Japan is located in Okinawa… The damages caused by the US military have been a part of our daily life” said Suzuyo Takazato in her speech.

The Ceremony was held in the Barcelona city hall in the beautiful Chronicle Hall where we were welcomed by Laura Pérez, councilor of the city.

The awarding of the prize to a lifelong activist and fighter for peace as well as for civil conflict resolutions and disarmament was a moving and remarkable action in Geneva on December 8th 2017. Jeremy Corbyn courageously stood on the stages of resistance against nuclear armament and war, and stood up for his positions against his own party as chairman.

It was the laudation by Sharan Burrow, the Secretary General of the International Trade Union Confederation (ITUC), who highlighted Jeremy Corbyn’s unique life’s work. She stressed that he stands for people’s social rights, as well as for human rights and peace. A just society is also always a peaceful one. 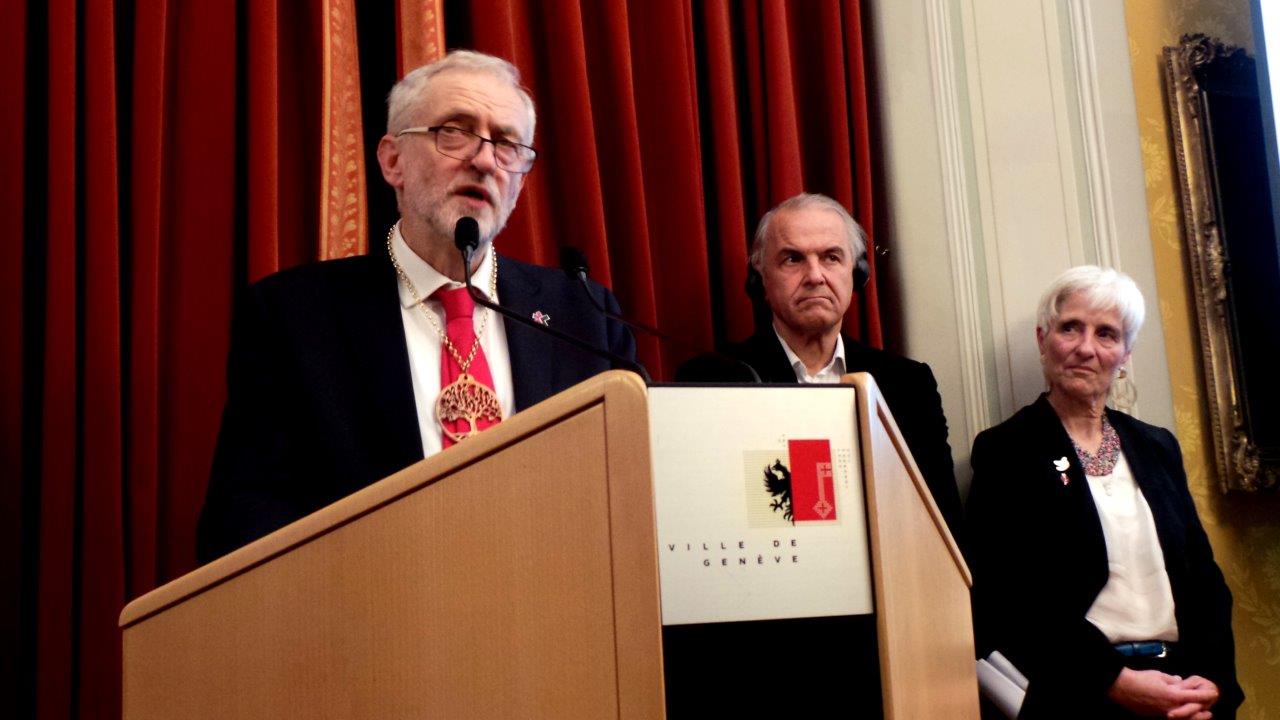 There were more than 200 guests who attended the ceremony including high-ranking diplomats of the UN, ambassadors and representatives of international governmental organizations who absorbed this message with enthusiasm, which seemed to speak from the hearts of everyone. It was the mayor of Geneva, Rémy Pagani, who in his opening again stressed the city’s role for peace – a dialogue and city of reconciliation.