Surely few will be surprised by the recent bombing of Syria ordered by Trump. If we were already used to the permanent military intervention of the US throughout the planet, with a bully as brand-new president it was predictable that the decadent empire would double its bet. The excuse this time was the criminal use of chemical weapons on the part of Assad, causing the death of civilians. In order to punish such a crime the US launched Tomahawk missiles, killing even more civilians, of course, tensing even more the string of international relations in a fast return to the times of the cold war.

But we need not be alarmed, because as we were taught in primary school, the United Nations Security Council, created after World War II in order to guarantee peace in the world, will take care of the issue … What hypocrisy!

A weeks ago I had the opportunity to be in New York for the presentation of the book “At the Crossroads of Humanity’s Future“, in which I precisely dedicate a chapter to the topic of the United Nations and the contradiction of a Security Council controlled by the world’s biggest producers of weapons. Also I had the opportunity to enter the UN headquarters and witness the sessions dealing with the project to prohibit nuclear weapons; a laudable attempt supported by more than 130 countries, although clearly boycotted by all the nuclear powers, the NATO countries, and some other accomplices of the hypocritical parody of international order, including the shameful refusal of Japan to support this project.

Those who are outraged when others violate the prohibition against chemical weapons; those who on repeated occasions have used that pretext, with or without proof, to bomb civilians and invade countries; apparently not considering that nuclear warheads are also weapons of mass destruction and therefore not seeing the need to ban them, they use the need for deterrence as an excuse, since in that select nuclear club there will always be some irresponsible ones that could use their weapons, and so the more “responsible” members of the club must disuade them with their own arsenals.

Meanwhile the rest of the world must live together with the permanent sword of Damocles of global extermination, without knowing when some prepotent and criminal idiot from any side could unleash disaster.

It is obviously clear that nuclear weapons have served neither to dissuade nor to avoid confrontations with conventional weapons, which have multiplied in recent decades, mainly through the banditry of military powers, and the deals of the military-industrial-financial complex. Terrorism has been engendered by that same monster, and it will not be more armamentism that stops the violence.

The signing of a treaty to prohibit nuclear weapons will be extremely useful, even without support from the nuclear powers, because it will further put in evidence the hypocrisy of those who seek to control the United Nations, and perhaps it could help create awareness in the population at large, so that they withdraw support from their warmongering rulers and stop being accomplices of their bullying and no longer follow them.

The hypocrisy of the global media must not be ignored, as they permanently skew the information demonizing the violence by only one side, whilst blessing the “just sword” of the other. They manipulate public opinion so that some victims of violence appear in all their human dimensions, causing widespread repulsion and rejection towards the victimizers; whilst the victims of the other side end up as simple statistics, as collateral damage.

There is a need to firmly support the initiative to prohibit nuclear weapons, and perhaps eventually we can prohibit all weapons. But also we need a strong campaign against the hypocrisy of the powerful, the rulers, the economic interests. the criminals of terrorism and the conventional armies that kill in the name of justice and peace, as well as a campaign against the media that seeks to show themselves as neutral and independent, whilst manipulating public opinion to serve the interests of those in power. It’s also important to warn about the level of hypocrisy in ordinary citizens who, as long as they don’t feel directly affected, support explicitly or by omission the rulers that feed the global violence; until the time when the violence comes close to them, but then it is already too late to react.

Translated from Spanish by Silvia Swinden 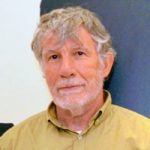