With Mairead Maguire’s inaugural speech, committed to the nonviolent resolution of the ethno-political conflict in Northern Ireland and Nobel Peace Prize 1976, the first day of the Rome Summit opened this morning.

Jody Williams, Nobel Peace Laureate 1997 for her commitment to the prohibition of anti-personnel mines strongly criticised the choice made by Pope Francis to not receive the Dalai Lama during his stay in Rome.

Lord William David Trimble, Protestant Northern Ireland politician and Nobel Peace Laureate 1998, said in his speech that peace also requires nuclear disarmament: it was not by chance that one of the first decisions of Nelson Mandela as president of South Africa was the elimination of the atomic programme.

The British lawyer Peter Benenson, representing the organisation that obtained the award in 1995, Amnesty International, drew attention to the current situation in South Africa, since there seems to be a worsening in the area of human rights. The country of Mandela, who a month ago decided to deny a visa to the Dalai Lama thereby causing the displacement of the summit from Cape Town to Rome, would be betraying many of Madiba’s values and achievements.

The Italian Pressenza Bureau is on the front line in the coverage of this Summit. Besides covering the various conferences it is conducting interviews backstage, updating information in real time through Facebook and Twitter.

Here are a few photos of the first session that have circulated as tweets: 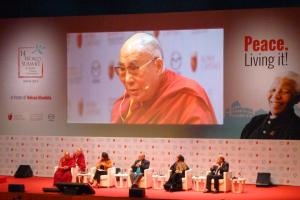 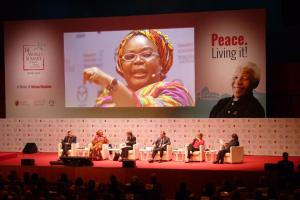 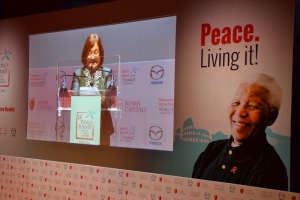 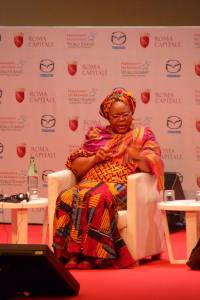 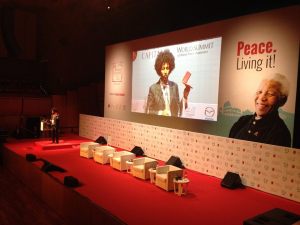 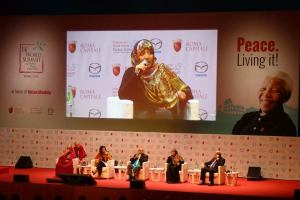