Greetings of a meaningful Season of Creation 2022!

This is the second series of Grupo Kalinangan Inc.’s (GKI’s) cultural mapping undertaking in Milagros. In case you missed the first article, here is the link: https://www.pressenza.com/2022/09/geo-tagging-and-cultural-mapping-scoping-and-negotiation-phase-in-guinluthangan-milagros-masbate/.

“Listen to the Voice of Creation” is this year’s Season of Creation (SoC) theme . It is a yearly observance to reflect, pray, and act together to listen to the cry of creation and protect our Iloy san Kinab-an (Minasbate for our common home). The SoC celebration commenced on September 1, the World Day of Prayer for the Care of Creation, and culminates on October 4, the Feast of St. Francis of Assisi, the patron saint of ecology. With the care of creation and the protection of cultural heritage in mind, the GKI team started to map key areas of the municipality including the Tagbon Cave.

Awe and delight were experienced as the team explored one barangay after another. The significant documented heritage will be shared among the stakeholders in the coming weeks. Today, we will share a snippet of our Tagbon Cave experience- the enchantment of spelunking and discovering life’s symphony inside the cave.

The Enchantment of Spelunking 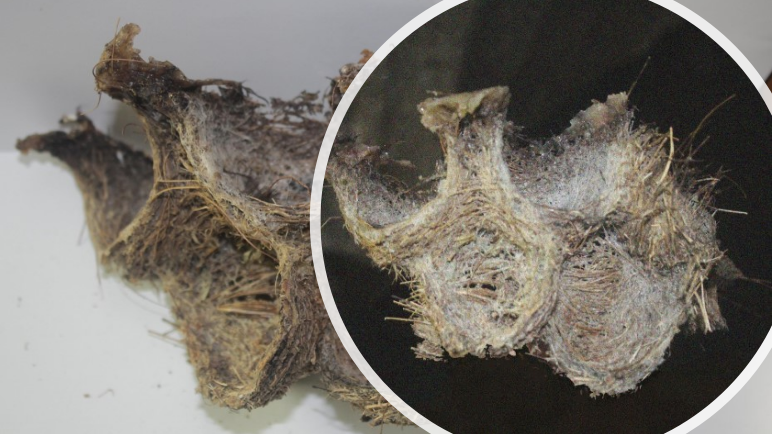 Spelunking in Tagbon cave brings a sense of clandestine mystery and urges one who enters it to be at ease with the ethereal darkness of the underground world. Some authors call it a place of “letting go and letting be,” embracing darkness (via negativa as Fox calls it), letting the curious explorers grip the beguiling, sometimes startling aspect of the unknown.

We bid Sublime Wisdom to alert our eyes to appreciate the beauty of Tagbon Cave situated in 12°13′50.51″N 123°34′16.38″E, Tagbon, Milagros, Masbate last September 1, 2022, the first day of this year’s Season of Creation. The elevation of these coordinates is estimated at 16.1 meters or 52.8 feet above mean sea level according to philatlas.com.

As cultural mappers, we are genuinely surprised on each successive day by this municipality’s natural splendor, uniqueness, and beauty.

Accordingly, the locals, including traditional healers, by and large, visit the cave during Holy Week (Maundy Thursday, Good Friday) as pilgrims to spend time in prayers, re-energize themselves, and as some locals say “doon nagpapalakas sa kuweba” (regain strength in the cave).

The Tagbon Cave is indeed God’s handiwork to be appreciated and taken cared of. Recognizing life’s symphony inside and outside the cave is thrilling for those who have eyes to see its splendor. What with the sprawling vines that crept from outside and then expanded to the entrance and interior of the cave; multi-sided or multilayered birds’ nests, cave salamander, the colony of bats, tiny lizards, and other living invertebrates; the spans of colors like the pinkish-maroon floor adorning the cave. As in other caves, life’s symphony in this place is spotted due to the combination of the many interactions from the uniquely shaped speleothems as the rainwater trickles through the cracks of the crevices of limestone while the other redeposited mineral build-up interacts with decayed organic matter, carbon dioxide gas, among other elements.

While we were mesmerized by the unique beauty of Tagbon Cave, vandals, and excavation with the intent to hunt for treasures inside the cave were issues we gathered. But we felt a sigh of relief when those who used pampasabog or explosives were apprehended by the concerned members of the community. These desecrations of nature were prevented from happening again and the locals, in the last eight years,kept the cave wild. Henceforward, it is hoped that the LGU and the various stakeholders be vigilant to help protect and preserve the natural beauty and heritage of Milagros. including that of Tagbon Cave. We must spread the ecosystem of the good in caring for our common home.

The GKI team would like to bestow our inestimable gratitude to Tagbon barangay officials and stakeholders for their hospitality and generous assistance in providing information, touring the team around, and sharing their local cuisine and delicacy. Cheers to the Municipal Mayor Hon. Natividad Revil-Magbalon, M.D., the MPDO Jessica Madrilejos, Tourism Designate Carmen Cortes for this Cultural Mapping Project. Heartfelt thanks, too, to our foster family, Vesper Venz, Bobby and Joy Rosero as well as Jandy Lomotos. 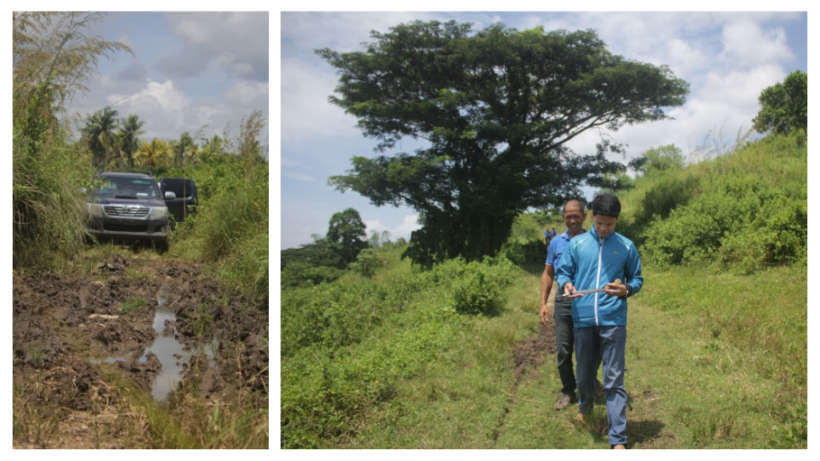 L: Leaving the car behind on the unpaved road, the team took a 30-minute walk to reach the cave. R: Barangay secretary Glendon Fuentes and Andreo Francisco led the group to the site. 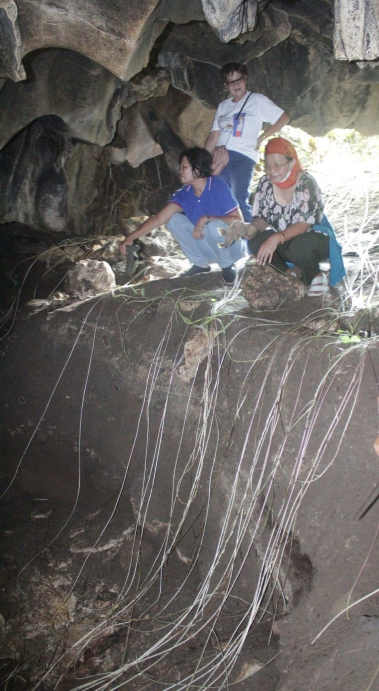 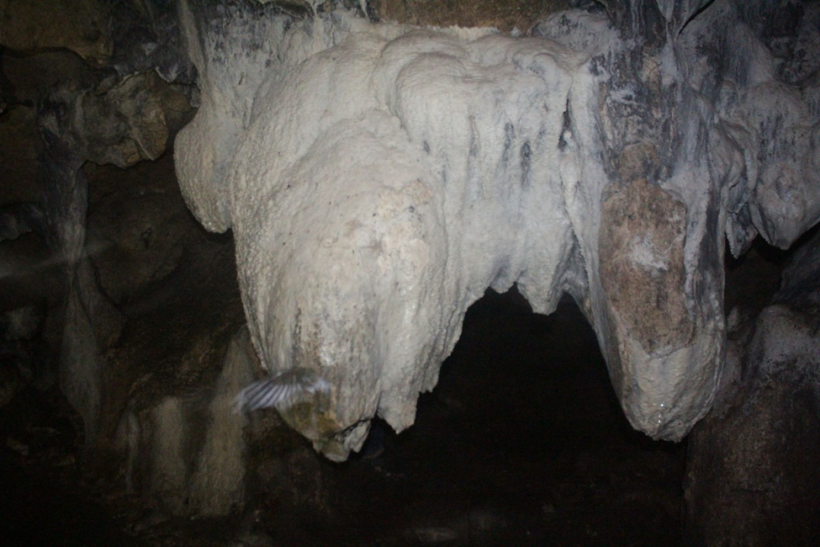 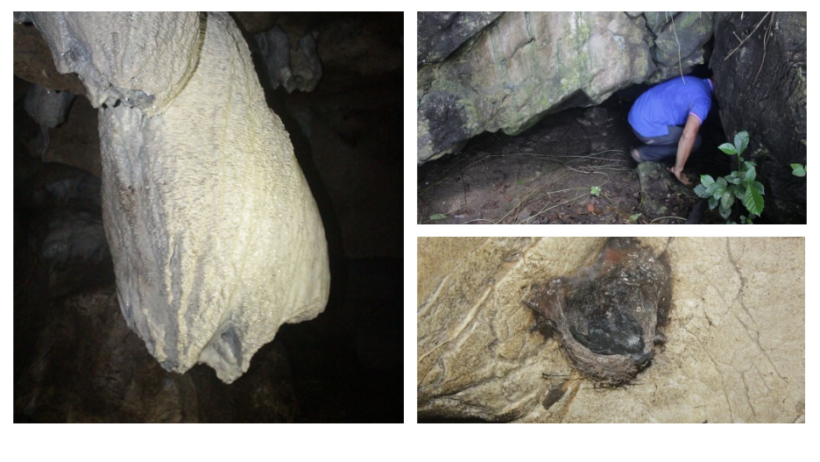 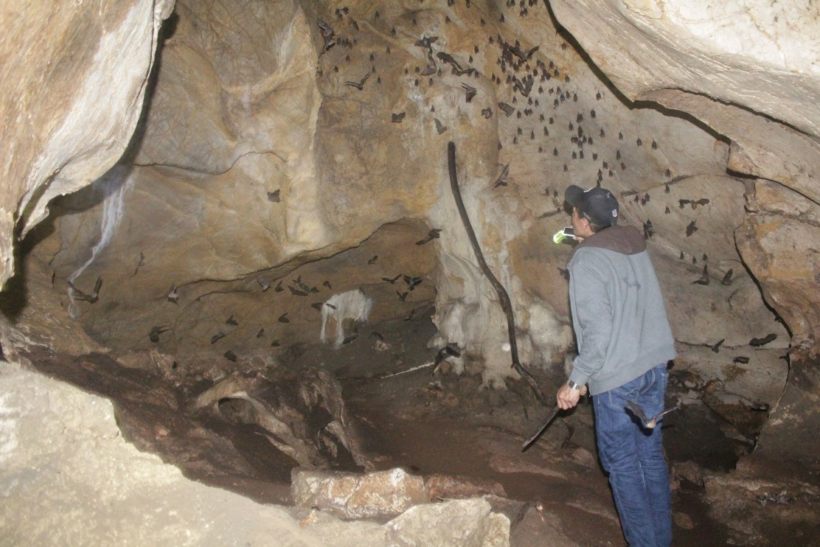 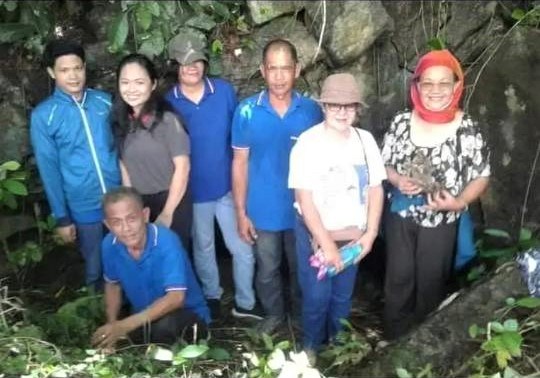 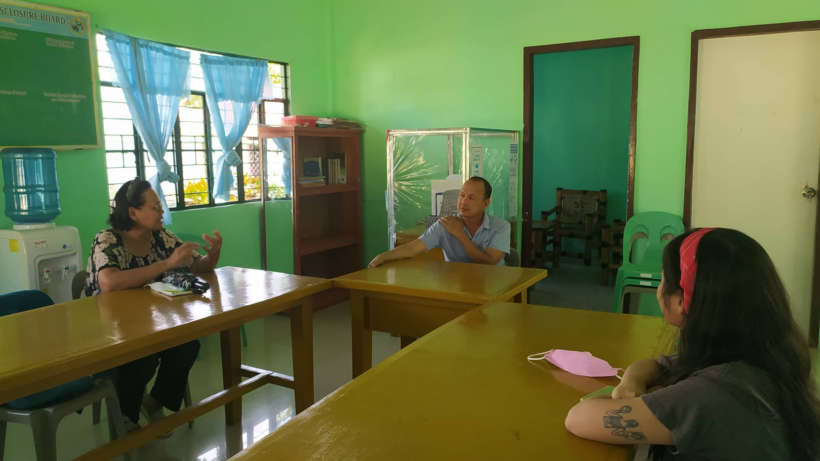 Through God’s grace, and in the spirit of harmony with Mother Earth, may this Season of Creation 2022 revitalize our commitment to care for our common home which includes the caverns, potholes, and caves.

Genevieve Balance Kupang (Genie) is an anthropologist, consultant, researcher, and advisor to individuals and organizations engaged in working for good governance, genuine leadership, justice, integrity of creation, peace, the indigenous peoples, preservation of cultures, and societal transformation processes. She is a peace educator, author, interreligious dialogue practitioner, and resource person with a career in the academe and NGO.