Threats to use nuclear weapons made this year by the Russian government have surfaced a reality long suppressed in the media and public sphere: the incredible peril posed by ongoing reliance of Russian, American, and other governments on nuclear weapons deployed and ready to use in large numbers.

At the first meeting of states parties (1MSP) to the Treaty on the Prohibition of Nuclear Weapons, held June 21-23, this reality was front and center. The declaration adopted by the meeting forcefully and appropriately states:

We are alarmed and dismayed by threats to use nuclear weapons and increasingly strident nuclear rhetoric. We stress that any use or threat of use of nuclear weapons is a violation of international law, including the Charter of the United Nations. We condemn unequivocally any and all nuclear threats, whether they be explicit or implicit and irrespective of the circumstances.

Far from preserving peace and security, nuclear weapons are used as instruments of policy, linked to coercion, intimidation and heightening of tensions. This highlights now more than ever the fallacy of nuclear deterrence doctrines, which are based and rely on the threat of the actual use of nuclear weapons and, hence, the risks of the destruction of countless lives, of societies, of nations, and of inflicting global catastrophic consequences. We thus insist that, pending the total elimination of nuclear weapons, all nuclear-armed states never use or threaten to use these weapons under any circumstances.

Some governments also addressed nuclear threats in their individual statements at the meeting. Notably, on June 21, the Irish representative referenced Russian threats at the outset of his statement:

While this first MSP is an important milestone, regrettably this meeting takes place at a dark moment for European and global security. Russia’s unjustifiable invasion of Ukraine, and its accompanying nuclear threats and rhetoric, illustrate starkly the urgency of our work towards a world free of nuclear weapons. With the invasion, and its aggressive nuclear rhetoric, Russia’s actions threaten to undermine the global nuclear disarmament and non-proliferation regime.

The International Association of Lawyers Against Nuclear Arms submitted a working paper, “Threats to Use Nuclear Weapons Are Unacceptable and Illegal,” to 1MSP. It explains the bases in international law for the illegality of nuclear threats, including the UN Charter, international humanitarian law governing the conduct of warfare, and the 1996 Advisory Opinion of the International Court of Justice on the legality of the threat or use of nuclear weapons. 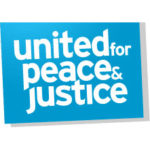 United for Peace and Justice
UFPJ was founded, in 2003, to build a coalition of local and national peace and justice organizations to prevent the War on Iraq. The conflicts raging around the world today make it clear that the need to work for peace remains more important than ever. www.unitedforpeace.org