For a few days now there has been nothing else to talk about in the United States. The shortage of baby milk has become a serious problem that worries many families, because the survival of their babies depends on it. But how has this situation come about? The answer is complex and has a bit of everything: politics, economics, food security… We explain below.

By Miguel Ángel Lurueña on his blog Gominolas de Petróleo

In the United States, many parents have spent days wandering from shop to shop and website to website trying to buy formula for their babies. But they barely make it. Many shops are empty and prices have skyrocketed, so for many the situation is desperate. To understand this, you have to take into account the context in which it is taking place. Perhaps it might occur to us that it is not such a big deal that there is a shortage of formula, so why not just breastfeed, as we have always done, and the problem is solved?

Breastfeeding: an unfinished business in the United States

The first thing to consider here is that breastfeeding can hardly be reversed, but not because of purely physiological issues, but rather because of external factors. When a mother stops breastfeeding her baby, milk production stops, although it can be restored even after weeks or months. What happens is that the mother’s situation is often not conducive to facilitating the task; for example, if she has already gone to work, she has little time to do so, especially in the United States, as we will see below. So in the US, breastfeeding is not an option for those who are already formula feeding their babies. But what about those who do have time to breastfeed?

Breastfeeding is undoubtedly the best option for feeding a baby. For example, organisations such as the World Health Organisation recommend exclusive breastfeeding for the first 6 months of life. But it is essential that the mother is able (and willing, of course) to do so. The big problem in the United States is that there is no maternity leave. In fact, it is the only developed country where women do not have this right. It has been demanded recently, but so far it has not been achieved, so mothers find it very difficult to breastfeed. It is true that there is the possibility of using a breast pump to store breast milk and offer it to babies in a bottle, but when it comes down to it, it is complicated to put it into practice (for example, if the mother has already gone to work, she must have time, a place where she can do it, resources to store the milk cold, and so on). In the end, what happens is that 60% of mothers in that country are forced to give up breastfeeding earlier than they had planned. This means that less than half of babies are exclusively breastfed up to three months and only one in four babies are breastfed up to six months. On the other hand, it is true that there are breast milk banks, but they do not have the capacity to meet all the demand, not by a long shot. Thus, the lives of many babies depend on formula milk supply. There is no alternative to breast milk (e.g. cow’s milk does not provide enough nutrients for babies and may also damage their intestines). Hence the concern and anxiety about the current shortage. But why is this happening?

One of the reasons for some of the shortages may be familiar. The covid pandemic caused disruptions in production (transport, raw materials, labour, etc.), which was further aggravated by people hoarding for fear of shortages.

But it was in February that things really took a turn for the worse. An outbreak caused by the consumption of formula milk contaminated with a bacterium (Cronobacter sakazakii) led to the hospitalisation of four babies, two of whom died. The products allegedly involved had been manufactured by the Abbott company at its Sturgis (Michigan) facility. The company voluntarily withdrew its products (Similac, Alimentum, EleCare brands), both in the United States and in the countries where it exported them, and also closed its plant. As a result, the FDA carried out a three-month inspection, finding some irregularities, in addition to those that were allegedly already being committed, according to an anonymous informant, a worker at the plant, in October 2021.

This closure is what has finally triggered this situation. As of today, the stock shortage is around 43%, although it could get even worse in the future, according to some companies. At the moment, prices have skyrocketed, not only because of the shortages themselves, but also because of speculation, as many unscrupulous people have taken advantage of the situation to try to remove them, something that the country’s government is already trying to investigate. In addition, measures have been proposed to limit such practices, for example, the sale of infant milk has been limited to several units per customer (three or four containers per person, depending on the retailer). 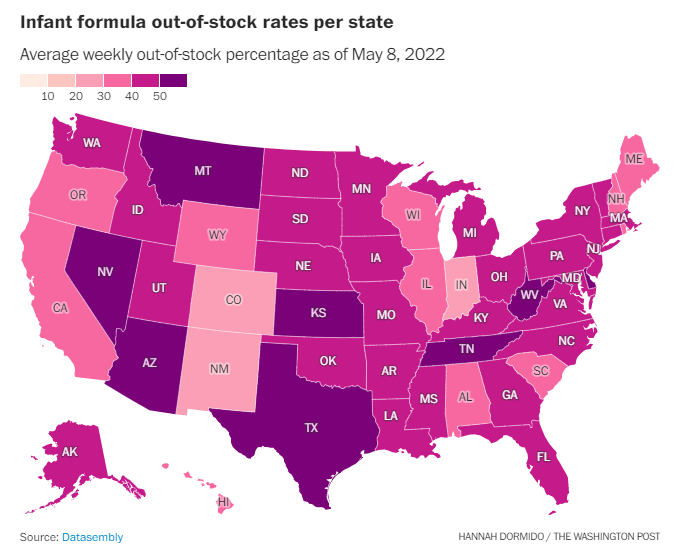 An airtight and controlled market

How is it possible that the closure of a single plant has triggered all this mess in a country of this size and wealth? There are several reasons. Firstly, it is a very closed market. Ninety-eight per cent of the formula milk consumed in the United States is produced in the United States. There are high tariffs and stringent requirements that make it difficult for foreign products to enter, so only 2% is imported, namely from Mexico, Ireland, Chile and the Netherlands. Moreover, the sector is dominated by just a handful of companies. Four companies – Gerber, Mead Johnson, Perrigo Nutritionals, Mead Johnson, Perrigo Nutritionals and Abbott (estimated to produce around 43% of the total) – produce 90% of the formula milk manufactured in the US. But that is not all. Many low-income families rely on vouchers to buy these products (a special food programme for women and children called WIC). So much so that it is estimated that half of the infant formula sold is purchased by WIC recipients.

Only three of the four producers: Abbott, Gerber and Mead Johnson have contracts to sell milk to WIC recipients. Moreover, these beneficiaries can only buy from the company contracted with their state. For example, a WIC beneficiary residing in Arizona can only purchase Gerber products. So people who reside in a state where only Abbott products can be purchased have a difficult time. This shortage has set off a chain reaction that has led to shortages in other parts of the country as well.

The US government is trying to sort out the mess by taking a number of measures. For example, among other things, the brands included in the WIC of each state have been made more flexible, the exorbitant price increases are being investigated and speculation is to be controlled, there are plans to temporarily lower tariffs to favour imports, and a single size of packaging has been proposed to facilitate marketing.

On the other hand, manufacturing companies have increased their activity by up to 50%, working around the clock, 24 hours a day, seven days a week, to try to compensate for the vacuum left by the closure of the Abbott plant. In the meantime, the FDA has been working with Abbott to correct the deficiencies that led to its closure and make its opening possible. On 16 May, it announced that it had signed an agreement with Abbott on the steps the company must take to restart operations. Abbott stated that it could possibly restart operations within two weeks and get the product to market within six to eight weeks. However, some manufacturers point out that even if Abbott restarts within that time, the shortage will continue for several months, probably until the end of the year.