Yesterday the Social Forum of Resistance began in Porto Alegre, a preview of the World Social Forum that will begin in Mexico on May 1st. Five young Canadians, members of the Katalizo¹ collective, will participate in person in the forum and will share their experiences and impressions with Pressenza, which we will publish daily. We begin today with their first dispatch: a brief introduction, the presentation of the team, and their first images from Porto Alegre.

Maria has a Master’s degree in International Public Management and is particularly interested in how the world is managed through economic, political and social structures/systems. She is passionate about supporting alternative forms of governance, such as social and solidarity economy and indigenous governance. She is looking forward to discovering the city and the people of Porto Alegre, whose motto “another world is possible” was first acclaimed more than 20 years ago.

Gérémy is currently studying for a degree in International Economics at the University of British Columbia. Originally from Rimouski, he is very involved in his community and describes himself as concerned about the various issues of fiscal inequality. He is looking forward to joining the Katalizo delegation in Brazil and participating in RSF exchanges.

A Master’s student in Public and International Affairs at the University of Montreal, Francois is particularly interested in international cooperation, governance and citizen participation. Since last year, he has been involved in the WSF and SRF processes. He is looking forward to participating in RSF’s activities to discover the different social actors in Latin America and the many social issues affecting this region of the world.

Laëtitia has a degree in International Studies, specialising in Law and Governance, and is currently studying for a Master’s degree in Public and International Affairs at the University of Montreal. She has been working with Katalizo for three years, participating in the WSF and WSFET (World Social Forum on Transformative Economies) processes, and is currently a management assistant. She has been preparing for the Social Forum of Resistance for a long time, and is looking forward to participating in the activities and discovering Porto Alegre through its people and culture. She is convinced that she will leave with a head full of new thoughts and inspiring encounters.

With a degree in International Studies and currently pursuing a Master’s degree in Environment and Sustainable Development at the University of Montreal, Stephanie is particularly interested in socio-environmental movements of resistance to mining companies in Latin America. She is therefore particularly keen to participate in the FSR to learn more about the actors directly involved in the struggles in Brazil and in Latin America in general. 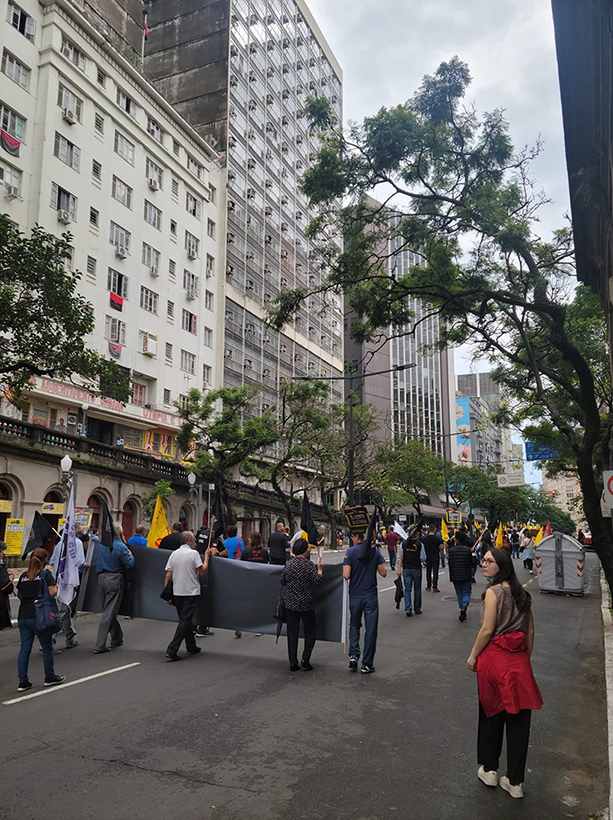