From the balcony of the Palacio de La Moneda and before a square completely overflowing with people, Gabriel Boric, the youngest President in the history of Chile, gave his first speech in which he called for unity and reunion, reaffirmed his commitment to the constituent process, his respect for human rights and to address the crises the country is experiencing due to migration in the North (“let us remember that these are human beings, let us not forget that they are human beings”) and the conflict in the South between the Chilean state and a people who have the right to exist, saying among other things:

“I assume today with humility, with awareness of the difficulties of the mandate I have been given (…) I know that in four more years the people of Chile will judge us by our deeds and not by our words”. “Today it was necessary to speak, tomorrow we will all work together”.

“As President Allende said a few decades ago, today we are opening the great avenues along which free men and women pass, to build a better society”.

“The recognition to exist of a people, with all that that implies, will be our effort”.

“We are going to recover the economy and the environment, never again sacrifice zones where the state is also responsible”.

“It is central that you become part of this process (…) from this place I want to make a call to you: that we accompany each other on this path and build the change towards a dignified and just country”. “We come from the mobilisations, let’s not forget that”. “We are all going to need each other: government and opposition”. “I want you to know that as the President of Chile and our teams, we will not take the problems away from you. We are going to talk to you and we are going to tell you the reasons for our decisions (…) the authorities cannot be unreachable”.

“We need to redistribute the wealth produced by Chilean men and women, because when wealth is concentrated in just a few, peace is very difficult”.

The new President was repeatedly interrupted, acclaimed and applauded by a crowd shouting “Gabriel, my friend, the people are with you”, “The people united will never be defeated” or “Revolution”, waving their flags that filled the atmosphere of this first afternoon of a new term with colour. 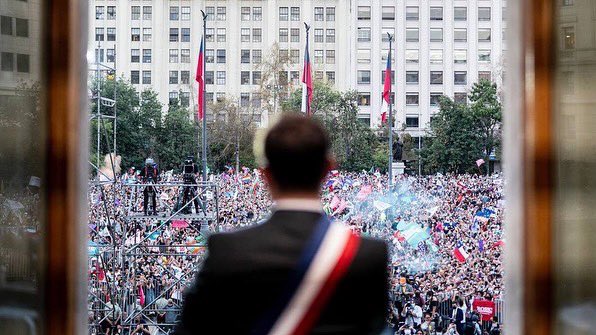