Today, the occupying forces withdrew from the house of Sultana Jaya. Sultana, excited, called her family and friends so that they could come and visit her. At last! The blockade was over.

False alarm, the policemen guarding the door had withdrawn momentarily because a team from the CNDH, the Moroccan National Centre for Human Rights (a state body) was arriving in a make-up operation that Sultana did not consent to. She did not even greet them, rebuking them from the window, with two SADR flags: you are part of the occupation, how can I expect you to tell the truth?

Meanwhile, the occupying forces, somewhat withdrawn from the house, beat up three people who tried unsuccessfully to approach Sultana and her family. They were her nephew, Chaikh El Hella Khaya, and two women, Zainabou Babi and Rabab Khaya.

Then, after ten minutes, the forces blocking Sultana returned, as usual.

In the photo published by a Moroccan newspaper, one can see the delegation of the CNDH in the street, without any policeman. This newspaper tried to prove that Sultana is just talking nonsense, in a crude montage. 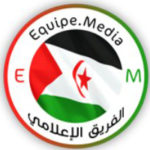