Demonstrators fill the streets and a battalion of police runs after them until nabbing several and letting their clubs fall. Within this scene, common and recurrent during that summer of 2015, and many other years in Chile, something surprising occurs. In middle of the skirmish near the courthouse, an elegant elderly lady strides directly to a young policewoman. She thrusts her ringed finger two inches from the bullet proof vest, her perfectly powdered face reflected in the helmet’s shield. She adamantly exclaims: “What are you doing? Who ordered you to do this? Don’t use your weapons!”[i]

She is attorney Fabiola Letelier del Solar. Decades standing up to aggression and repression made her more feared than fearful. More than one powerful person conceded to her strong voice and appearance of a well-placed lady.

During ceremonies to bid farewell to Fabiola Letelier, who died November 18 at 92 years of age, her colleagues and family members told dozens of similar anecdotes, portraying a person uncompromising when it came to ethics and the defense of human dignity. Equally unwavering was her belief in the capacity and right of every person to fully realize their potential as human beings. This led her to a broad activism that encompassed the entire range of economic and social rights, to embrace with the same passion feminism, the dream of dignified housing of people in a land occupation, Mapuche indigenous autonomy, an environmental fight against a polluting water company, and –at a time when it appeared merely a pipe dream- the repeal of the Constitution of 1980.

The Pro Paz Committee and the Vicariate of Solidarity– the first institutions, both under the wing of the Catholic Church, to arise after the military coup of September 11, 1973 to protect lives, denounce human rights violations and systematize understanding about the repression –were schools for her and the professional staff who worked there. At these organizations the scaffolding was built to orient others how to deal with an urgent situation that was absolutely unprecedented in Chile.

At countless crucial moments, Fabiola Letelier confronted military prosecutors, dictatorship functionaries and other officials. On November 18, 1975 the entire Gallardo Moreno family, including small children, were abducted, and the next day four of them appeared dead, which the dictatorship attributed to an armed confrontation. Jesuit priest José Aldunate and Fabiola Letelier went to Santiago’s coroner office to demand that the bodies be turned over to them, ascertaining that their deaths resulted from torture and enabling a decent burial. Alberto Rodríguez, son, grandson, and nephew of the victims, recently said, “Were it not for Fabiola kicking and screaming at the doors of the Medical Legal Service, today my loved ones would be lying somewhere with the disappeared.”

But Fabiola Letelier reached the persuasion that she had to go further: not just hold up to the dictatorship but to support the struggles (and the men and women who resisted) to defeat it.

So it was that Fabiola Letelier took a step forward and accepted the challenge to create a new, non-religious organization with a political perspective and a broader range of action: Codepu (Comité por la Defensa de los Derechos del Pueblo, Committee for the Defense of the Rights of the People). In 1980 she left the Vicariate to become Codepu’s first president, thus encouraging others to follow suit. “She was like the umbrella. Her presence was a forceful endorsement of what Codepu was,” notes attorney Hiram Villagra.[ii]Years later Fabiola admitted that “I never imagined what I was getting into.”[iii]

Codepu made no distinction between prisoners of conscience and resistance prisoners. It was a determination that was both bold and key for the era of protests that was approaching in the mid 1980s. Furthermore, Codepu, with Fabiola Letelier at its helm, was ahead of its time, before the emergence of the Democratic Intransigence coalition that called for restoration of a genuine democracy, not a political agreement with the dictatorship.

Fabiola Letelier could not have been any other way. After September 21, 1976, when the dictatorship assassinated her beloved brother Orlando in Washington D.C., she became the spearhead of multiple efforts on multiple fronts to repudiate the crimes committed by Pinochet and the repressive apparatus that answered to the dictator.

Under pressure from the United States government, the Letelier case was inscribed as the exception to the 1978 Amnesty Decree Law, presuming a symbolic trial without making waves. It would be the crowning jewel of a democracy by gentlemen’s agreement where “justice to the extent possible” – as opposed to full justice – was the official response to the systematic practice of state terrorism documented by the Truth and Reconciliation Report in 1991. 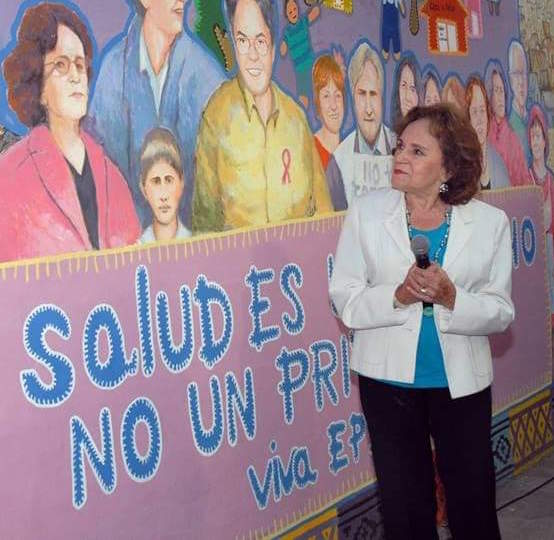 However, the investigative work in the Letelier case surpassed all expectations. The arguments presented by the plaintiff attorneys, led by Fabiola, and its documentation of the workings of the repressive DINA secret police and the crime committed against Orlando were both substantial and decisive.[iv]The prison sentences handed down by the court in May 1995 were low considering the magnitude of the crimes, but these were the first of many convictions that would be issued over the years for the former directors of the DINA. At the time of his death in 2015, former DINA chief Manuel Contreras had served 17 years out of a total 529 years in prison for 106 legal cases. The decision, in the words of attorney Letelier broke “a true madness of impunity,” as well as the widely accepted notion that the democratic transition depended precisely on not having justice.

After the court ruling, Fabiola Letelier did not retire, nor did she rest on her laurels. Convinced that neither full truth nor full justice had been achieved, she pursued and obtained, first, an extradition from Uruguay, and, second, a conviction for the abduction and murder in post-dictatorship of Eugenio Berrios, killed to prevent him from testifying in the Letelier case. Later came cases such as those of the American journalists Charles Horman and Frank Teruggi, Spanish priest Antonio Llidó, students Jaime Robotham and Claudio Thauby, and many more. Until 85 years of age she continued her active work as a lawyer.

Fabiola Letelier and her family paid a high price for her persistence, enduring threats, harassments and surveillance. At one point, even the detectives of the Human Rights Brigade of Chile’s civil police were pressured with threats to their families. When she learned of the situation, Fabiola Letelier grabbed the phone and called the director: “This is intolerable!” She insisted that the Investigations chief speak to the Defense Ministry, because they guessed that members of the Army intelligence were behind the threats.[v]

Despite her stature as jurist, Fabiola Letelier was never offered an international or national post. Her colleagues at Codepu applauded the National Human Rights Award, a recognition she was accorded in 2018, but they believe it came late. “Fabiola was excluded because she could not be managed and because of her critical political posture,” believes attorney Adil Brkovic.[vi] Codepu was one of the few independent organizations that persisted after the dictatorship, continuing to denounce human rights violations, as was the case of its report on torture during the democratic transition.[vii]“Fabiola said what needed to be said, and that’s why the political powers invisibilized her. They abandoned human rights and her too,” affirms Brkovic.

One of the greatest but less known qualities of Fabiola Letelier was her capacity as mentor.[viii]She perceived that many people only need a chance to grow as professionals. In early January 1976 a recent law school graduate who just wanted to help came to her office at the Vicariate. It was the first time they met, yet Fabiola believed in him and proposed that he begin working later that month to replace law clerks leaving for southern hemisphere summer vacations. That young lawyer was Nelson Caucoto, today an eminent human rights attorney on his own right. “Under the wings of Fabiola, I didn’t leave the Vicariate ever again,” says Caucoto.[ix]Some of the cases he sustains to this day originated from habeas corpus writs and complaints for the forced disappearance of people Caucoto filed before the criminal courts, as part of his work with the Ordinary Justice department headed by Fabiola Letelier. “For me, she evokes respect, infinite gratitude, and irrevocable affection.”

Like Caucoto, the lives transformed and the persons empowered thanks to Fabiola Letelier are incalculable.

At this moment in Chile, in an uncertain horizon in which some Chileans seek to turn the clock back to dark ages of the country’s recent history, the words spoken by Gabriela Sánchez Leiva at the requiem mass for her grandmother resonate: “She always had faith that things could be changed, that it only depends on our commitment. You don’t have to be Fabiola Letelier to be Fabiola Letelier.”