There is excitement and unfolding of inspiration as one unwraps the gifts s/he received and amplifies the good. This is true especially if it is done in the presence of others. Such were the feelings experienced last September 13, 2021, during the international webinar dubbed “Gifted to Give: In the Spirit of Indigenous, Jewish, Christian, Muslim Faith Traditions.” As two participants put it “The speakers’ sharing is very rich; I felt full. You were excellent in giving reactions to other speakers. What Prof. Alih said, is beautiful; there’s a good relation between Muslims and Christians in their place…” (Victoria Corral). ‘I felt very heartened by it’ remarked Sr. Anne.

The holy encounter with other traditions brought to the fore the reality that all created beings have the Divine imprint in them. Yes, our Creator has gifted all of us – earthlings with boundless blessings and gifts. ‘The entirety of God’s creation has a purpose; even flies and mosquitoes have a reason for existing, how much more so peoples and nations’ (Morgan, 2021)!

Mindful of each traditions’ giftedness, the Notre Dame de Sion (NDS) Congregation, the CBCP–Episcopal Commission on Interreligious Dialogue, Sandiwa, Network of Advocates for National Minority Rights, the National Ulama Council of the Philippines, and Bukal ng Tipan Pastoral Center have organized a talk show, giving panelists the opportunity to share what their traditions are “Gifted to Give.” The theme was inspired by this year’s celebration as the Philippines commemorates the 500th anniversary of Christianity in the country. 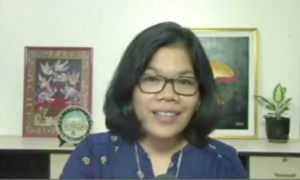 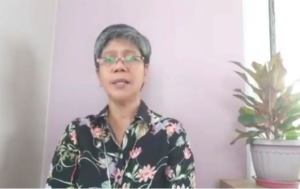 Every religious tradition has an identity and offers a unique gift to humanity. Thanks to the NDS Sisters’ invitation through Sr. Ofelia De La Torre, NDS, Regional Coordinator who gathered the panelists, Dr. Genevieve Balance Kupang, Rabbi Fred Morgan, Dr. Jessica Joy V. Candelario, and Prof. Alih Sakaluran Aiyub. Below are some highlights of their sharing: 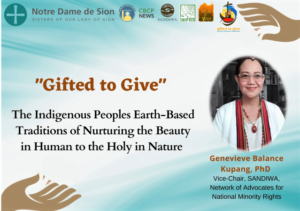 Kupang shared that the indigenous peoples’ (IPs) umbilical cord is tied with the complexities and dynamism of Mother Earth. The IPs bridge the divide of alienation from nature by some destructive sectors that plunder their ancestral domains. She said that Kabunian (Supreme Being) has showered us with the spiritual gift that all are interconnected, “agi tako ngam-in” or “we are part of the sacred web of life and are one as siblings” in the words of Chief Seattle in the Turtle Island.

She elaborated the nurturance of the holy in nature: a) deep reverence for Mother Earth and all created beings; b) the IPs in culture and the arts; c) the forests and backyards are their pharmacies (Gaioini, 1994); d) indigenous creativity as the seedbed of sustainable development; e) rituals/ceremonies of thanksgiving and affirmation of shared values; and f) the gift to hear the cry of the earth and the poor.

They have exquisite love stories with these seeds like this story Kupang related: In the early 1900s, Cordillera was not spared from famine. Elders went to places like Ilocos Sur to look for food. An American missionary was surprised to see an Igorot guarding a few bundles of rice panicles while a lot were already starving to death. American missionary to the husky Igorot guard in G-string: Young man, why don’t you give out those few bundles of rice to save one or two lives? Igorot guard: Apo (a way of respect), those are seeds for the future to save not only two lives but 2000 lives (Chaokas & Fiar-od, 1999). These seeds when grown have nourished the IPs in many levels-spiritual, physical, cultural, emotional, and social at their core. It is what is celebrated during Lumdang, a thanksgiving feast where varieties of legumes, other vegetables, and meat are cooked together like in a steamboat party.

The Gifts of the Jewish Tradition 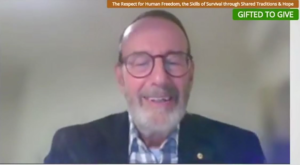 Rabbi Morgan, reacting to Kupang’s presentation said that it resonated with the Australian Aborigines’ experience, especially regarding their relationship to the land. The land is not supposed to be possessed but protected; custodianship is a gift we learn from the IPs and the concern to improve the life of the local communities that make up the web of life. He posited that it was only recently that greater respect was given to the aborigines’ tradition and what they have given to society. Morgan affirmed the IPs’ authenticity as seed keepers.

He then shared the three gifts of the Jewish people to humanity: human freedom, skills of survival, and hope. Specifically, Judaism pioneered a most precious gift-“religion and morality” quoting Rabbi Lord Jakobovits, and “ethical monotheism” of thinkers like Hermann Cohen and Leo Baeck.

During the Roman occupation in ancient Judea, the Jewish challenged injustice and fought for human freedom by a rebellion against the occupation. As human freedom was missing, they pursued the right of every individual to be treated with respect, to live in dignity, and the ever-abiding hope that they could perfect the society in which they lived.

The Jews survived by focusing on the life of the mind through the learning, interpretation, and Torah’s transmission. They created a community of scholars. This community sustained the Jews through their centuries of trial. Their physical struggle was transmuted into a spiritual struggle through the discipline of learning and the building of community. Thus, the Jews gifted humanity values like universal education (the importance of passing on tradition), welfare institutions to support the needy (the first public welfare institutions emerged within the Jewish community), thirst for knowledge (the Jews have had more Nobel Prize winners per capita), etc. This gift of survival was recognized by the Dalai Lama as a gift to humanity, who, when faced with the threatened extinction of his own Tibetan people through exile, approached rabbis to hear how the Jews responded to exile and been able to survive.

The values around justice include moral freedom of choice, a belief in the world’s perfectibility, the equality of humanity before a single God, access to opportunities that enable all to find their place in history. 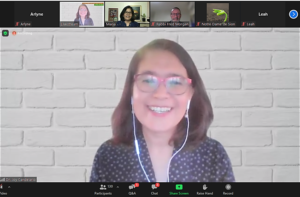 Dr. Candelario shares the gifts of Christian tradition that have formed her to follow the path of Christ. In the spirit of a Triune God are the gifts of communion and participation, solidarity with the poor, and mission to cultures.

Christians believe in a God that is a community–Father, Son, and Spirit, embodying “mutual relations, radical equality, and a community of diversity (Johnson, 2014). The Triune God, described as a dance, moving together gracefully, mutually indwelling, interpenetrating one another is embodied by Christianity’s gifts to the world. Communion is reflected by the thousands of Christian denominations and communities around the world living the Gospel in various forms and expressions, paradigms, and methods of Christian theologies, and in the communal dialogue and discernment to respond to life concerns and social issues. Christianity’s preferential option for the poor has been shown through its charitable works and through the building of communities that strive towards systemic change. Finally, as Christianity is proclaimed but also interpreted in the local languages and cultures, it contributes towards a deeper appreciation and understanding of the giftedness in every nation and race.

Candelario mentions, however, that these gifts are yet to be fully unpacked. Amid a changing world, Christianity needs to be more open to the renewal of the Spirit. She dreams that communities extend their dinner tables instead of building higher fences. She urged all to take to heart Pope Francis’ encyclical-Laudato Si (Care for our Common Home) and the UN sustainable development goals. “Let us help heal the world’s ills and unwrap the gifts that we received by sharing in the transformation of the world” she concluded.

Tawhid, Unity of Purpose for the Love of God, and Love of our Neighbors 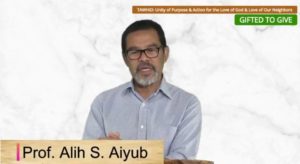 Professor Aiyub articulated that they are gifted to give because their faith has enabled them to respond to today’s challenges. He emphasized the centrality of the Abrahamic faith which are the two greatest commandments: Love of God and Love of Neighbors. To do this, he said, that we must undergo a process of total human development to equip ourselves: intelligence quotient (IQ) for rationality; emotional quotient (EQ) for social intelligence; spiritual quotient (SQ) for discernment and wisdom; adversity quotient (AQ) for resiliency, and love quotient (LQ) for serving others unconditionally. To be a true living witness of our faith is the goal.

The Islamic teaching of Iman, Taqwa, and Ihsan (faith, fear, and love of God) is our moral compass for inner purification, motivation, and inspiration to submit to God’s will.

Tawhid (Uluhiya/Rububiya), the core of Islam, signifies the chief proviso of the believers’ submission to Allah’s will. The highest level of submission is to manifest the embodiment of God’s image which are the Al Rahman, Al Rahim, and Al Adil (loving, caring, and just), spreading Godliness and observing unity of thought, speech, and action.

He gave examples of his ummah’s faith in action: amanat (relief program), sadaqah (cash assistance), Friday love drive, capitalizing on zakat (almsgiving). These were initiatives of faith leaders in a conflict situation, promotion of interfaith dialogue, and relief during this pandemic.

After Aiyub’s presentation, Kupang concluded her reaction by appreciating Aiyub’s commitment to the culture of dialogue. Aiyub, conversely, rendered his reaction to Candelario’s sharing and said that he is a witness to the Philippine Church’s great contribution to the bloodless EDSA revolution that has overthrown Marcos. The Church worked for the defense of human rights during the oppressive regime, and assisted the detained, exploited, tortured, and murdered citizens. He worked together with Christian advocates like Sr. Mariani Dimaranan, SFIC, the former head of the Task Force Detainees in the Philippines. Aiyub disclosed that he was attracted to the Vatican II’s encyclicals and other succeeding documents on interreligious dialogue.

Gifts are meant to be shared as Sr. Arlyne Casas, NDS expressed in her closing remarks. It is a wonderful way to celebrate the joy of having received God’s gifts. The participants appreciated the panelists’ lively interchange with Sr. Maria as the moderator. Rabbi Morgan hopes that such an event help to further the cause of interfaith understanding and peacebuilding across the world.

To end, I echo the prayer that goes “May our efforts bring us to a deeper understanding and respect for one another. May our faith give us the courage to act wisely and work together for harmony.” Heartfelt thanks to CBCP News for recording the event. Here is the link: https://web. facebook.com/watch/live/v=2685853925042031 &ref=watch permalink. 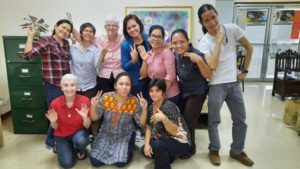 Feeling grateful and uplifted with the successful webinar, the NDS community
and the CBCP media staff enjoy themselves.

Nebeb belongs to the Kankanaey tribe of Mountain Province.