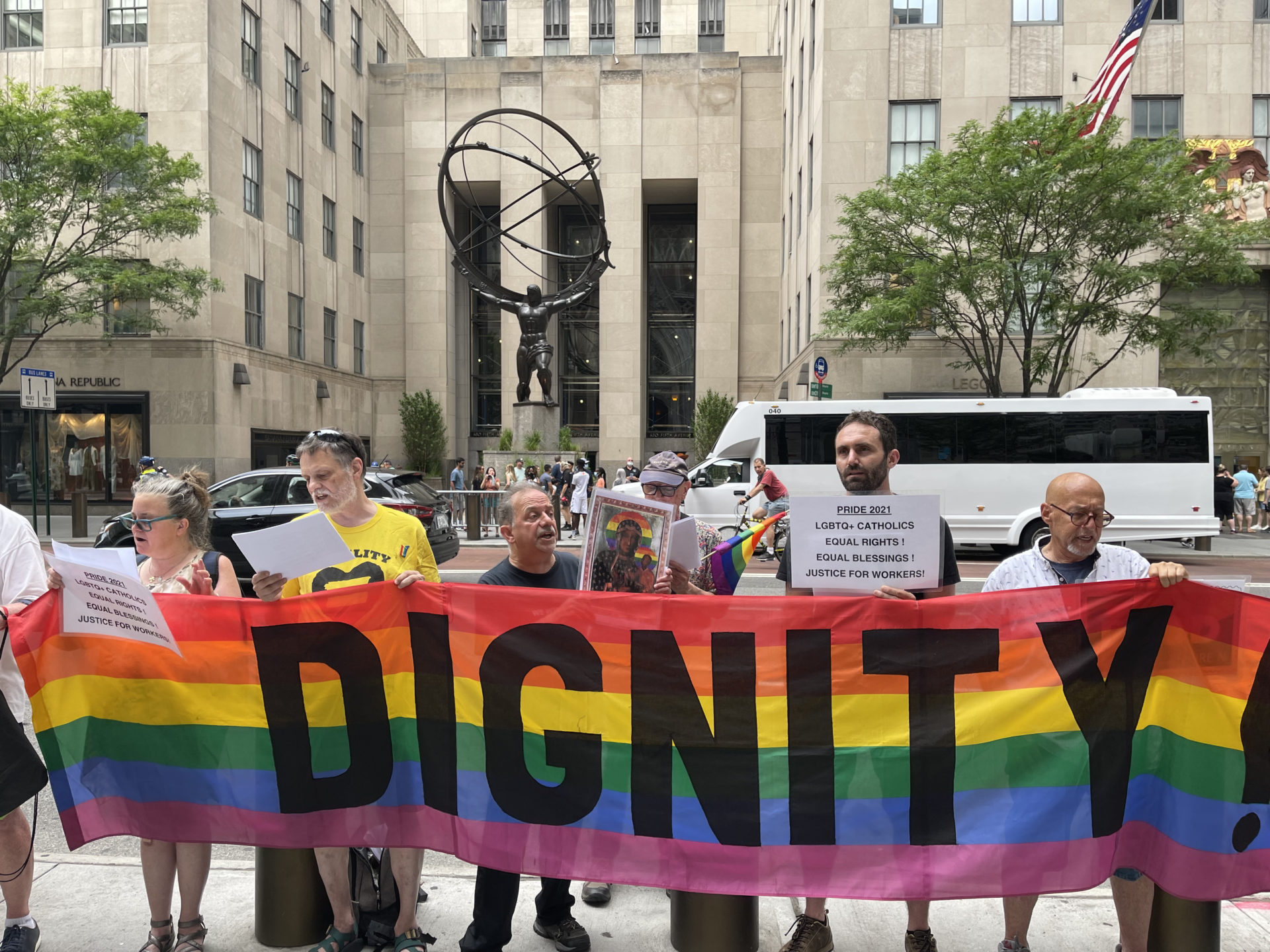 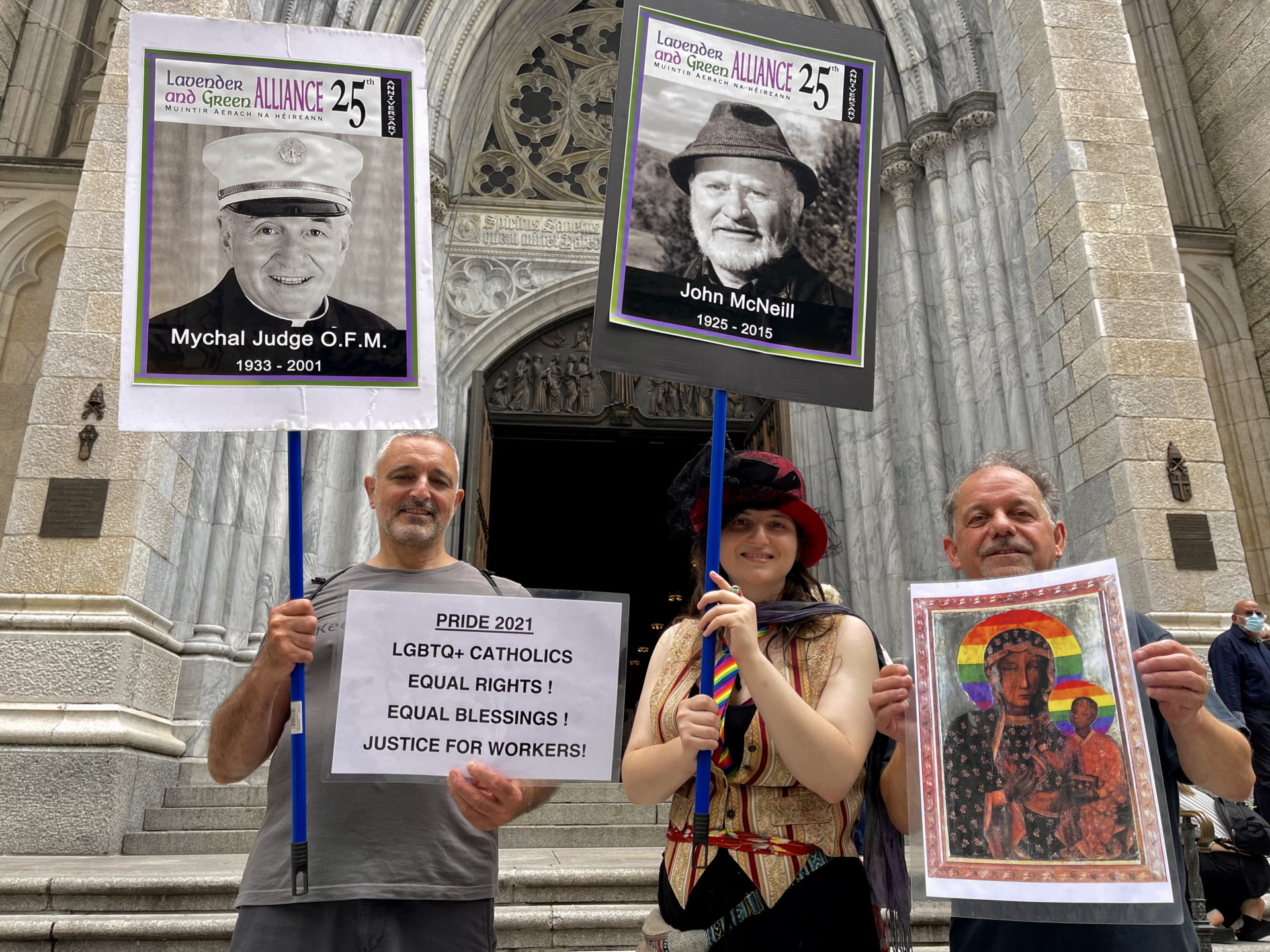 The sound of the group chanting “equal rights! equal blessings! Justice for Catholic workers! and singing hymns, All Are Welcome, We Shall Overcome, Ubi Caritas echoed on 6th Avenue and through the open Cathedral doors. NYPD officers and Catholics exiting the cathedral after morning Mass looked in surprise at the LGBT activists in prayer and song.

“We are here in Prayer, Pride and Protest giving witness for love and justice,” said Brendan Fay organizer of the rally. “We honor the love of same-sex couples and our families. We have “come out” of the closet and seek to live more honestly and openly. We call for equality for lesbian, gay, bisexual and transgender (LGBT) people not just in civil society, but within our Catholic church.”

Fay highlighted the Vatican document banning Church blessings for same – sex couples. Called a responsum, the document issued on March 15 by The Congregation for the Doctrine of the Faith (CDF) and approved by Pope Francis reinforced the Vatican’s official position that it is “illicit” for priests to bless same-sex unions.

Gathered behind the rainbow banner with the word DIGNITY in Bold, universal symbol of LGBT equality designed by Gilbert Baker, the group called for reform of church teaching that still renounces homosexuality as an ‘intrinsic disorder” and opposes same sex marriage.

Fay said, “The Church blesses farm animals, houses, cars and cats. Yet the love of same – sex couples is called sin and unworthy of a blessing? This is a theology that leaves a trail of hurt and harm.”

Thomas Moulton, a pediatric hematologist oncologist said “ studies highlight the link between anti LGBT religious teachings and higher levels of distress and suicide rates among LGBT youth.” He also expressed concern with the US Bishops recent talk of excluding Catholic leaders such as President Biden from the Holy Communion. “We invite church leaders to join in dialogue, witness committed couples in love and to support LGBT youth ”.

Organizer Tom McLoughlin called for a compassionate outreach for transgender youth in every parish and for homeless LGBT youth.

The activists held images of pioneer catholic priests Fr. Mychal Judge and Fr John McNeill. McNeill was an openly gay Jesuit theologian and psychotherapist. He was the author of the groundbreaking book , ‘The Church and the Homosexual’ in 1976 challenging Church teaching on homosexuality which he said fostered violence and prejudice. Fay directed the film on McNeill’s life, “Taking a Chance on God ”. Fr. Mychal Judge who died on 9-11 was recalled for his compassion during the AIDS crisis and his ministry with DIGNTY.

Kathleen Sullivan said she and her husband Blaise were proud to support her fellow LGBT Catholics. “I am here with you in love and support. Although as a Catholic I find it shameful that the priest greeting parishioners had his back to us the entire 30 minutes we were there. It felt like a shunning of the most basic teaching of Christ– that God is love. We need to be about love.”

Holding a Polish ICON of the Rainbow Madonna – Mary “Mother of all” the group prayed for LGBT communities in Poland, Mexico and Hungary and around the world.

Fay said, “To be neutral or silent at this moment in history is to participate in our own suppression and second -class status. Extending the hand of friendship and solidarity with our LGBT communities across the world, we rise together and raise our voices for equality and justice, love and liberation”.

“We work passionately for the day, when exclusion and discrimination will be history and our Church will be a place where LGBTQ people are welcomed, our stories heard and where our marriages and our families are blessed and affirmed as good”.

Fay concluded, “The courage and visibility of the global LGBTQ community is slowly transforming the Catholic Church to a more honest and welcoming community.”