saying goodbye is always one way to keep
the past from vanishing completely. you can
say it over and over again, while you still can.
what can be said anyway about how we were there, who
one was and how the days get made?

you can rehearse saying goodbye or
hello all morning in the mirror and
still be struck silent when the time comes
to head out the door and see your
way to wherever it is you’re going.

so it goes, said so-and-so to someone else, on
the bus en route to the outskirts of town, just to
have something to say. what is it to fill
the airy space between with all sorts of ways to see
or say something to someone?

and who knows really how it goes outside the traces one
leaves on the vanishing road, the place where you
put the books to give away. there’s no way out, or in for
that matter, outside the people you meet around the
way, their densities and laughter, their shrugs and
long inquisitive stares, as if the horizon could be
anywhere you see it.

someone passes across the window doing a wheelie on
a scooter while an apple grows cold and sweet in
the fridge and the wind blowing in from the sea shakes
the long fronds of a banana tree. who knows
what you will have wanted to say about that.

are poems the time where the living and
the dead confer? these little conscious rooms that
open between waking and sleep, that belong to
everyone and no one. or is it in names or the immediate
distance remembrance puts on the tip of your tongue like a
butterscotch candy, dreaming out loud on the page.

good thing it lasted while it’s good i’d like to say to
you now and take care, so long, keep us posted. 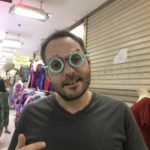 Daniel Owen is the author of the poetry books Toot Sweet (United Artists, 2015) and Restaurant Samsara (Furniture Press, 2018). His translation from the Indonesian of Afrizal Malna’s Document Shredding Museum was published in Australia in 2019 by Reading Sideways Press, and other translations (of work by Malna and Farhanah) have been published in various journals and magazines.

Homage to Lewis Warsh, who was a poet, a prose writer, and one of the founding professors of the MFA program in Creative Writing at Long Island University, Brooklyn Campus. Professor Warsh passed away on November 15, 2020. His students and friends honored his memory…writing.