2am night moon and window light wakes-up my four bedposts
just walked up tar path past the fort and old bones, all alone
in green park that noticeably slopes upward for a few blocks,
more so when I’m cycling up over this road (other times of day)

not tonight because the moon is full of slowed way-down air
darkest gray hue to see way up through, while my shoe boot’s
chunky heels clunk cement to move forward solid muscles up –
then I stop to shop & sit at 24-hour bodega, alone there too

my narrow hems crawled, craved direction by street green light
now rays are streaking in quietly, while still night moves human
voices inside, streaming past me carrying their why would yous,
late looseness flows with limb’s laughs assuring, I’m not alone

I return a buddy’s call (came in when theatre darkened its lights)
who’s struggling through chemotherapy treatment for 2” tumor
near kidney at 50, says cancer surgery was most alone time ever
tonight he’s weathered, but just under a month left of chemo to go

founded by: up-talking late writers like me with morning missions
of moon worship, or/and aged bones roaming, sleeplessness at 2am
while in my own room, just as I entered from own womb alone, still
with mothers & others, who will link uphill on roads lit by the moon 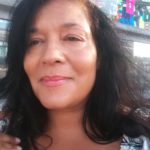 Amyre Loomis works as a writer-photographer in the worlds of politics, education, arts, and faith; she finished a BA in English at the University of Michigan, a BFA in Lens Media at Richmond University in London and completed coursework for her MFA in Creative Writing at LIU Brooklyn.

Homage to Lewis Warsh, who was a poet, a prose writer, and one of the founding professors of the MFA program in Creative Writing at Long Island University, Brooklyn Campus. Professor Warsh passed away on November 15, 2020. His students and friends honored his memory…writing.