Such is the aura still surrounding Charles Dickens that it is no surprise readers want to mark the 150th anniversary of his death in June 1870, even in the middle of a desperate global public health crisis.

While this impulse to show one’s admiration of – and gratitude to – deceased writers is fairly commonplace, it’s much rarer to consider the conditions that enable people to read at all. One of the events of 1870 that will probably not be treated to the same attention in the UK as Dickens’s death, but should be remembered alongside him, was the passing of the Education Act.

Mandating new partially state-funded board schools to be built in areas where provision of elementary education was insufficient, the legislation established the principle of a statutory responsibility for schooling, and helped achieve the rapid rise in UK literacy rates seen in the latter decades of the 19th century. Between 1851 and 1900, there was a rise in British male literacy from 69.3% to 97.2%, while for the female part of the population, the improvement in literacy rates was even more pronounced, from 54.8% to 96.8%.

The legacies of the Education Act – also called the Forster Act after W. E. Forster, who drafted the bill – are multiple, given the importance of mass reading and writing to the functioning of democracy. Perhaps most visible of them is the collection of still-used school buildings dotted around Britain’s cities that date from the decade following this legislation.

Dickens famously used his pen throughout his career as a tool for campaigning with and writing about a huge number of topical issues, from inhumane welfare reform to parliamentary corruption, but education was one of his most consistent concerns. In Nicholas Nickleby, his depiction of the abusive Dotheboys Hall exposed the Yorkshire boarding school industry as a national disgrace. Later, in Hard Times, Dickens raised the problem of an overly utilitarian curriculum – with no space for imaginative learning or play.

The author gave speeches for working-class adult education facilities, such as the Manchester Athenaeum, and visited Ragged Schools – charities that taught the poor before the government assumed responsibility for their education.

While Dickens had some anxieties about the overly religious syllabus in some of these philanthropic schools, he wrote articles exhorting his readership to support them nonetheless, while making it clear that their existence was a marker of the state’s “frightful neglect” of “those … whom it might, as easily and less expensively, instruct”.

Dickens also made the problem of illiteracy a major theme of his fiction. Many of his characters are semi-literate, while others have no reading ability at all. Jo the crossing sweeper from Bleak House, who dies from the same infectious disease that the heroine Esther Summerson survives, is one of Dickens’s completely illiterate characters. His inability to decipher the signs that saturate the city in which he lives makes him especially vulnerable to exploitation. 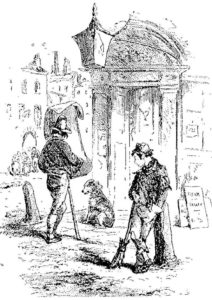 Jo the Crossing Sweeper, from Bleak House by Charles Dickens.

When Dickens’s non-reading characters get the chance to correct their disadvantage, they often take it. In Our Mutual Friend, the illiterate servant Mr Boffin suddenly becomes wealthy and swiftly hires someone to teach him how to read.

Dickens did not see literacy as a panacea for all the ills of his unequal society – and he warned against the dangers of teaching some but leaving others uneducated. In Our Mutual Friend, literacy drives a wedge between the non-reader Lizzie Hexam and her brother, Charlie, whose personality is clearly tainted rather than enhanced by his encounter with the education system.

A similar estrangement happens between Pip and his brother-in-law, Joe Gargery, in Great Expectations. In both cases, it is the non-schooled characters who retain their moral compass, while their literate loved ones become prey to the seductions of social prestige and a concomitant self-disgust for their roots.

Great Expectations includes an episode that looks back to the very start of the narrator Pip’s literacy, in which he composes his first, orthographically unorthodox letter:

Pip’s coming to literacy is not merely ornamental to Great Expectations, and his early bad prose isn’t exhibited among the refined words of the narrator’s mature self just for the sake of comic value. After all, if Pip hadn’t learned to read and write we would never hear his story.

Unlike many in his time, Dickens saw that improving literacy had nothing to do with teaching the poor morals and everything to do with empowering them. His continual emphasis on learning to read was a key part of that democratic radicalism which made him popularly loved but drew criticism from conservatives such as Anthony Trollope, who satirised his rival as “Mr Popular Sentiment”.

It is because Dickens implicitly recognised literacy as a political issue that the revolutionary Marxist William Morris included a lover of Dickens’s novels nicknamed Boffin in his News from Nowhere, a novel that imagines a 22nd-century London after its transformation into utopia.