After leaving Madrid on October 2, 2019, the march will continue towards southern Spain until reaching the African continent through northern Morocco on October 8. Several countries are already preparing to receive the core team that will showcase their initiatives…

Morocco: on the occasion of our tours in March and May, several meetings were held: in the eastern part, at the University of Oujda and Fez, with representatives of trade unions and associations, in Casablanca with several associative representatives and with students. While waiting to specify the concrete initiatives, the main cities envisaged for the moment are Tangier, Casablanca and Tarfaya, to which Fez and Agadir could be added.

Introduction of the WM2 in the UGTM union, Fez, March 2019

Introduction of the WM2 in the University of Oujda, March 2019

Canary Islands: activities are scheduled from 15 to 19 October in Tenerife, Las Palmas and Lanzarote. The 15th at the University of La Laguna, with a forum or meeting on Education for Peace and the screening of the documentary “Le début de la fin des armes nucléaires” (The beginning of the end of nuclear weapons). On October 16, with the ascent to the summit of Teide (3718 m.) to carry the flag of the 2nd World March. The next few days will be devoted to educational and institutional activities in Lanzarote and Las Palmas.

Mauritania: Fieldwork with members of WWW&V, (World Without Wars and Violence), from Nouakchott allowed the meeting with representatives of institutions (the president of the National Human Rights Commission Human Rights, the president of the National Basketball Federation, the director of Youth, the president of the urban community of Nouakchott) who showed their support and commitment to the world march; as well as with various associations of committed young people and personalities of the university world and human rights. As a result, the Nouakchott promotion team was created, made up of representatives of 6 groups, as well as a group of WhatsApp from Mauritania. This team has already held 3 meetings and organized a first awareness raising activity on the occasion of Ramadan: the realization of a Ftour (in Spanish, iftar, which means the breaking of fasting) for non-violence in a public space. In relation to the route of the base team, the pass through Nouadhibou, Bon Lanuar, Nouakchott and Rosso is contemplated…

Meeting of the promotion team in Nuakchot

Members of the promotion team of Nuakchot.

Senegal: during our circuit in May, we had meetings with representatives of a school of 3000 students and its director, members of the Federation of Football Schools, a choir, a meeting with the leaders of the African Centre for Human Rights Education (which has already organized women’s marches all over the country), all enthusiastic and with images in order to prepare the ground for the WM2 (2nd World March). A first coordination meeting was also held at which activities such as film screenings on Gandhi or conferences have already been defined: from October 2, and from October 26 to November 1, various activities distributed in the different localities of the country and neighborhoods of Dakar. The humanist collective Énergie pour les Droits Humains (Energy for Human Rights) of the department of Pikine is planning to hold a forum in its area. A group was created in WhatsApp under the name 2WM Senegal.

The aim is to continue expanding the possibilities in other cities such as Saint-Louis and Thiès and to activate the Casamance area by considering an adjacent Ziguinchor-Bignona-Gambia-Kaolack-Dakar road. 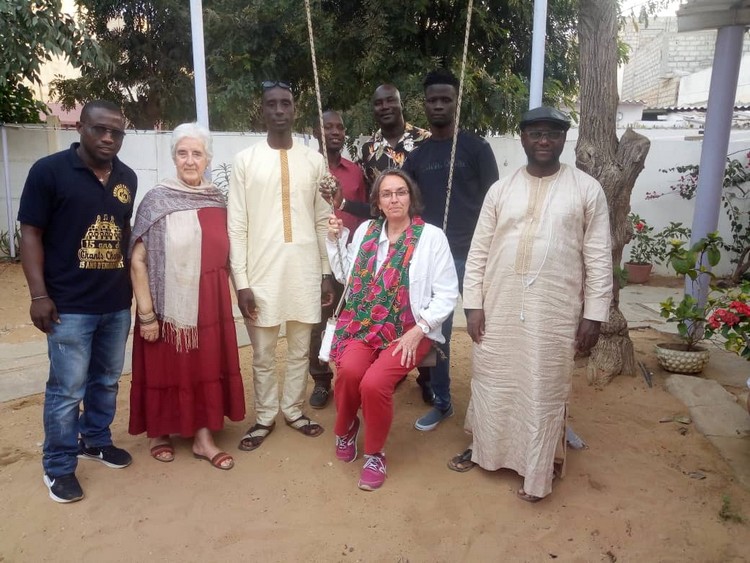 Meeting with members of the Commission on Education – Human Rights, Dakar, May 2019.

Guinea-Conakry: We are in a phase of awareness raising and resumption of contacts with personalities and collectives who had supported the 1st march, as well as opening up to new possibilities.

The departure of the international base team that will carry out the route of West Africa will finally take place on November 4, from Dakar in the direction of America, after a circuit that follows this calendar:

Benin and Togo: Awareness and mobilization committees, relations with private and state agencies and institutions in the two countries, are in progress. It is planned to launch a football tournament and prepare a recreational day in schools with messages of peace and principles of non-violent action. A partnership is currently being negotiated with the President of the RFI clubs in Benin, the International Junior Chamber, the Beninese Red Cross and other associations.

Cameroon: Contacts are maintained with the main collectives as well as with the Mayors for Peace Africa network.

Ivory Coast: an event is planned for the launch of the march on 2 October in Abidjan-Cocody. On 15 October in Bouaké, the centre of the country, and on 28 October in Korhogo, in the north of the country. On November 1, a delegation from Côte d’Ivoire will travel to Dakar to welcome the core team.

Mali: WWW&V members seek to implement activities despite economic difficulties and the situation of social and political violence.

Congo, Democratic Republic of Congo: the project is progressing slowly due to material difficulties. Awareness has already been raised in the cities of Lubumbashi, Likasi and Mbuji-Mayi, mainly in schools. In Lubumbashi, some pastors and musicians are trying to join the project.

Nigeria: a peace march and conference are planned in Abuja; there is also the idea of opening a peace and meditation park in the city of Benin and a peace march in Lagos.

In East Africa, a coordination team has been established in Mozambique to articulate a new route, which will cross 8 countries for 31 days, from 18 November to 20 December: Ethiopia, Kenya, Uganda, Zambia, Zimbabwe, Mozambique and South Africa, to continue on to Buenos Aires. The idea is to organize a public event in each country where we invite the different heads of state to publicly commit to peace. There is also the project to make the greatest human symbol of peace with 20,000 people in Chimoio. Another idea is to involve the airlines transporting members of the march by informing passengers with the distribution of a brochure about the WM2.

Despite the economic, social and political difficulties, everyone in their own way tries to participate in the project. This being the case, if you wish to collaborate and support these initiatives that are already in progress, you can do so by facilitating the contacts of individuals, personalities or NGOs in the countries mentioned or in other countries through this email address <info@theworldmarch>.