We have only followed international law, especially the law of the sea, where the highest priority is to save people from distress.”

A German boat captain faces a long and costly trial in Italy for charges targeting her humanitarian efforts on behalf of refugees.

“Italy’s fascists are using this case as a showcase to deter others from aiding migrants. They would prefer to let people drown in the Mediterranean.”
—Rula Jebreal

Captain Pia Klemp, 35, told Basler Zeitungon June 7 that her upcoming trial in Italy for years of efforts with the civilian lifeboat “Iuventa” that saved at least 1,000 lives will take years and hundreds of thousands of dollars. Klemp faces up to 20 years in prison, but, she said, whether or not she ends up in jail—she would challenge any conviction in the European Court of Human Rights in Strasbourg, France if necessary—the damage has been done.

“The worst has already come to pass,” said Klemp. “Sea rescue missions have been criminalized.” 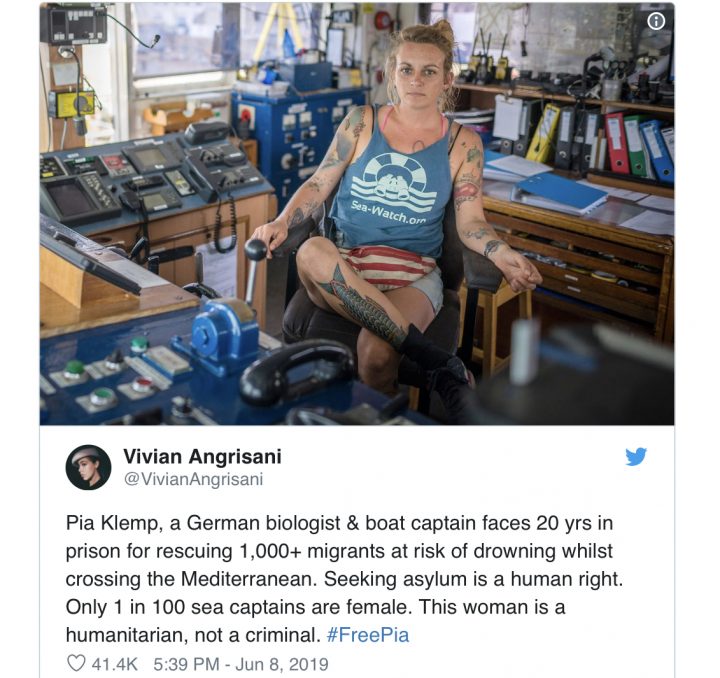 The Italian charges against Klemp come as part of an anti-immigration crackdown by far-right Interior Minister and Deputy Prime Minister Matteo Salvini, who ran on imposing harsh penalties on refugees.

“Italy’s fascists are using this case as a showcase to deter others from aiding migrants,” journalist Rula Jebreal said on Twitter. “They would prefer to let people drown in the Mediterranean.”

Klemp is banned from sailing along the Italian coast due to her activism in favor of refugees. In her comments to Basler Zeitung, Klemp addressed the notion that sea rescues like the ones she did are in any way motivating for refugees to come to Europe.

“People come because unfortunately there are so many reasons for flight,” said Klemp. “And they come over the Mediterranean, because there are no legal entry routes.”

Commentators on social media noted that Klemp’s actions in the Mediterranean were in keeping with the U.N.’s policies on rescues at sea and the humanitarian duties of a ship captain.

Klemp would have been in violation of the U.N. Law of the Sea (pdf) if she didn’t help migrants, pointed out Twitter user lifelearner47. 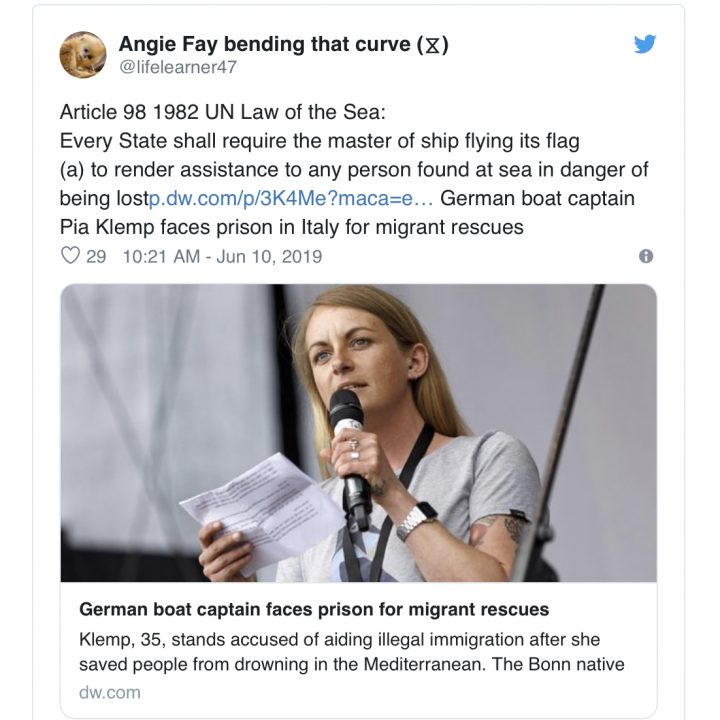 “We have only followed international law, especially the law of the sea, where the highest priority is to save people from distress,” she told Basler Zeitung.

“In another era, Pia Klemp would have saved Jews from extermination,” tweeted Smith. “That she faces 20 years in jail in 2019 for saving refugees lost at sea, indicts the EU for hypocrisy and abetting crimes against humanity for allowing Italy to conduct a show trial.”

A petition on Change.org calling for the charges to be dropped has already received over 77,000 signatures.

Klemp told Basler Zeitung that she hopes the trial is over quickly—the captain has been working full time on the case.

“The sea is the most beautiful place for me,” said Klemp.

“Every sunset is great, if you accompany dolphins or the water looks like it’s cooking because you accidentally picked up a tuna swarm,” she added. “Just that way of being away from the sound, from the many, from everything.”