The U.S. is reportedly opposing the resolution over language on reproductive health for victims of rape.

In what critics denounced as the Trump administration’s latest attack on women’s rights across the globe, U.S. officials are reportedly threatening to veto a United Nations Security Council resolution seeking to end the use of rape as a weapon of war over its language on reproductive health.

“In the latest step in Trump’s war on women, U.S. opposes healthcare for survivors of rape during war. Yes, you read that right.”
—Heather Barr, Human Rights Watch

According to the Guardian—which first reported on U.S. opposition to the measure late Monday—Trump officials are objecting to the resolution’s “language on victims’ support from family planning clinics.”

“In recent months, the Trump administration has taken a hard line, refusing to agree to any U.N. documents that refer to sexual or reproductive health, on grounds that such language implies support for abortions,” the Guardian reported. “It has also opposed the use of the word ‘gender,’ seeing it as a cover for liberal promotion of transgender rights.”

“If we let the Americans do this and take out this language, it will be watered down for a long time,” an anonymous European diplomat told the Guardian. “It is, at its heart, an attack on the progressive normative framework established over the past 25 years.”

Heather Barr, acting co-director of the women’s rights division at Human Rights Watch, tweeted: “In the latest step in Trump’s war on women, U.S. opposes healthcare for survivors of rape during war. Yes, you read that right.”

Others also took to Twitter to condemn the Trump administration’s efforts: 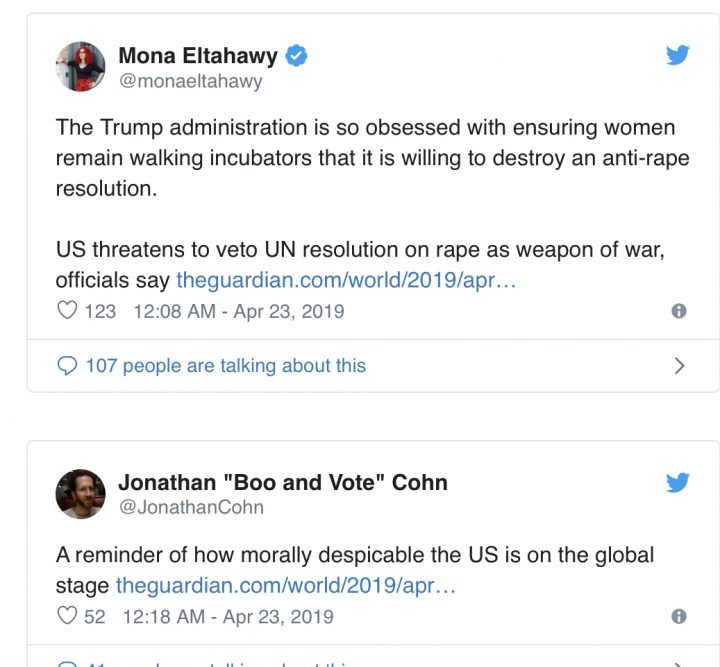 Pramila Patten, U.N. special representative on sexual violence in conflict, told the Guardian that the resolution’s passage is now in serious doubt due to U.S. opposition.

“We are not even sure whether we are having the resolution [Tuesday], because of the threats of a veto from the U.S.,” Patten said.

The resolution seeks to improve monitoring of sexual violence in conflict, punish perpetrators, and increase support for victims.

Patten said the language on reproductive health “is being maintained for the time being and we’ll see over the next 24 hours how the situation evolves.”

“It will be a huge contradiction that you are talking about a survivor-centered approach and you do not have language on sexual and reproductive healthcare services, which is for me the most critical,” said Patten.