A truth about movements is, they move. They morph, evolve and move around a country or even around the globe. This occurs over months and often over years.

The Yellow Vest (Gilets Jaunes) movement in France is having a major impact and gaining international attention, already spreading to other nations, with some nations like Egypt banning the sale of yellow vests to prevent the protest from spreading there. The movement is showing that disrupting business-as-usual gets results. Will it come to the United States? What form would it take here? What could spark the equivalent of the Yellow Vests in the US?

It is common for a protest to develop in one part of the world and move to another country. This is even more common in modern times as the economy has become globalized and communication across different countries has become easier.

The US revolution against Great Britain was part of the Age of Enlightenment, which questioned traditional authority and emphasized natural rights of life, liberty, and equality as well as sought self-government and religious freedom. The French Revolution followed 13 years after the US in 1789. It led to political changes in the UK, Germany and across Europe. This coincided with the Great Liberator, Simon Bolivar, freeing colonies from the Spanish Empire including Venezuela, Colombia, Panama, Ecuador, and Peru. They became independent and briefly united as a single nation.

The democratic revolutions of 1848, known as the Springtime of Peoples, were part of a widespread revolutionary period that impacted 50 nations in Europe, beginning in France and spreading without any evident coordination. The issues were about democratic and worker rights, as well as human rights and freedom of the press. It led to the abolition of serfdom in some nations and ended monarchy in Denmark. The French monarchy was replaced by a republic, constitutions were created, and empires were threatened by countries seeking sovereignty.

In the era of Decolonization of Africa and Asia, 1945 and 1960, three dozen new states achieved autonomy or outright independence from their European colonial rulers. In Africa, a Pan-African Congress in 1945 demanded an end to colonization. There were widespread unrest and organized revolts in both Northern and sub-Saharan colonies. Protests, revolutions and sometimes peaceful transition ended the era of colonization.

The 1960s were an era of protest that peaked in 1968 around the world. Multiple issues came to the forefront including for labor rights and socialism, the feminist movement, protests against war and militarism, and against racism and environmental degradation. Protests occurred in the United States, Europe, the Soviet Bloc, Asia, and Latin America.

More recently, economic globalization and the Internet have accelerated global protests. An example of this is the anti-globalization movement itself. As corporations took control of trade agreements and began to write trade for transnational corporate profits, people around the world saw how this impacted their communities and fought back.

The Zapatista Uprising in Chiapas, Mexico on January 1, 1994, was an uprising that coincided with the beginning of the North American Free Trade Agreement (NAFTA). The Zapatista Army of National Liberation was an uprising by the indigenous, local population against being exploited by global trade. Their action was an inspiration to others and an anti-NAFTA movement developed in the United States, growing into an anti-globalization movement.

The 1997 financial crisis in Southeast Asia, followed by the International Monetary Fund restructuring the debt in ways that brought austerity, led to protests across the region in Korea, Indonesia, and Thailand against economic globalization and the undue influence of transnational capital.

These combined into the Battle for Seattle in 1999 at the World Trade Organization meetings where 50,000 people from the US and around the world protested on the streets of Seattle for four days shutting down the meetings. This was a movement of movements moment that united many single-issue groups into a force too powerful for the elites to overcome. WTO meetings since then have been met with mass protests as have IMF and other economic meetings. This evolved into making it very difficult to pass corporate trade agreements in the United States, e.g. the people stopped the Trans-Pacific Partnership and Trump will have difficulty getting NAFTA-2 approved. Join the campaign to stop Trump Trade’s NAFTA-2. 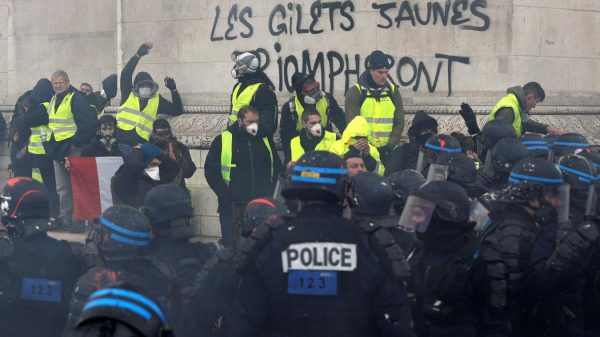 “The Yellow Vests will win” written on L’Arc de Triomphe in Paris. AFP

The French Yellow Vest movement is made up of working people who are protesting the unfair economy every Saturday.  The 8th “Act,” held this Saturday, was larger than expected as the government and media were claiming the movement was dying down over the holidays, despite the movement saying they were not over and were just getting started.

The movement began as a protest against a gasoline tax, but it quickly became evident that this was just the final straw against a series of policies that have made people economically insecure.  President Macron has aggressively pursued a neoliberal agenda on behalf of the wealthy, lowering their taxes while cutting social services.

Macron has responded with the elimination of the fuel tax, raising the minimum wage, and cutting taxes on pensioners, but they continue to call for the “president of the rich” to step down. Macron’s popularity is down into the twenties in polls, while a majority of French people want the Yellow Vest protests to continue. The movement is exposing contradictions in France that cannot be solved by the current economic and political systems.

Macron, while making concessions, has also called the protesters thugs and agitators. Police tactics have been aggressive and violent, in the face of mostly nonviolent protests. They arrested a Yellow Vest participant, Eric Drouet, who the media has labeled a “leader,” on flimsy charges of protesting without a permit, stoking more outrage. The media calls him a leader while saying the leaderless movement will fail because it lacks a leader. This reminds us of similar treatment during Occupy.

The movement has blown up political divides because there are people from the extreme left, extreme right and everywhere in-between participating. It includes young and old, male and female. It shows people uniting in a revolt over the unfair economic system and its impact on workers.  They are also calling for participatory democracy by demanding citizen initiatives where people can vote on legislation, firing political appointees or even changing the constitution if they gather enough signatures. The Yellow Vests are showing system-wide problems that require both the economic and political systems to change. 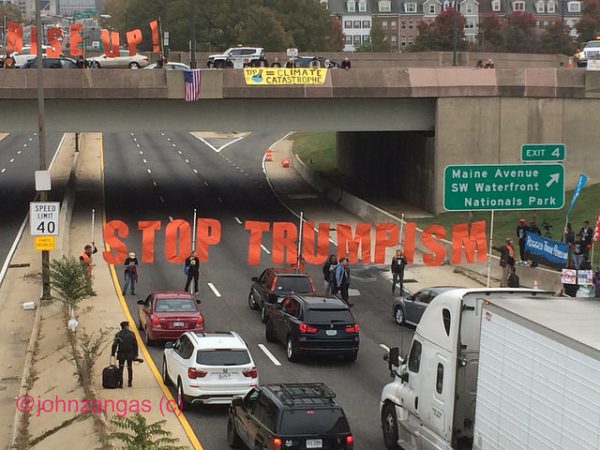 Will ‘Yellow Vest’ Protests Come to the United States?

Many of the problems the French people suffer are also felt in the United States. The US economy has been designed for the wealthy for decades and billionaire President Trump-era policies have made that reality worse. People never fully recovered from the 2008 economic collapse when millions lost houses and jobs, got lower income and higher debt.

The globalized economy that has been designed for transnational corporations has not served the people in the United States well.  The fly-over states of the Midwest have been left hollowed out. Rural hospitals are closing as the economy disappears. In urban areas across the country, decades of neglect and lack of investment have created impoverished conditions. Racist and violent policing have been used to prevent rebellion and contain the unrest. People are struggling. Addiction and suicide rates are up. There is vast hopelessness and despair.

An economic collapse is on the horizon. As Alan Woods writes in New Year, New Crisis, “The question is not if it will happen, only when.” The US economy is dominated by Wall Street, which ended the year in crisis. Citigroup’s share price declined 30 percent from where it started the year, Goldman Sachs declined 35 percent, Morgan Stanley 24 percent, Bank of America 18 percent and JPMorgan had a 10% loss. Woods points to China’s economy slowing as is Germany’s and problems in other European nations all point to a global slow down, which those in power do not have tools to respond to as interest rates are already low and government debt is already high.

When the recession hits, the economic insecurity of the people will worsen. Like the people in France, the rich are getting obscenely richer and avoiding taxes by hiding billions offshore. And, the government is doing the opposite of what is needed, e.g. reducing taxes on the wealthy when there should be a millionaire’s tax of 70%, and blocking the Green New Deal.

And, when the economic crisis hits, people will blame Trump. Many voters supported him because he promised to break from a system that is designed to favor the wealthy. They will know from their own experience that he did the opposite. Stop Trumpism! will become an even louder rallying cry and a president whose popularity always hovered around 40% will find himself in polls at 30% or lower, as a presidential campaign kicks into high gear.

The economy is often the trigger event, as it was for Occupy, and we already know there are going to be mass teacher strikes in 2019, indeed plans to strike in LA are expected to escalate more broadly. The GM workers who lose their jobs when four US factories close could be facing losing their homes and have other economic stresses causing them to revolt. Congress refusing to take National Improved Medicare for Allseriously when tens of thousands of people are dying every year simply because they are uninsured could light the spark.

People in the US might not be wearing yellow vests, but we know from other recent protest movements, people are willing to shut down streets and highways and stop business as usual. More may participate if a radicalizing moment ensues now that they have seen the model work in France.

There are many triggers that are likely to spark aggressive mass protests in 2019. Get ready.