by Jon Queally, staff writer for Common Dreams
President Nicolas Maduro of Venezuela officially cut off dipomatic ties with the U.S. government on Wednesday—and gave American diplomats 72 hours to leave the country—in response to President Donald Trump declaring formal recognition of an opposition lawmaker as the “Interim President” of Venezuela, despite not being elected by the nation’s people for that position.

“They intend to govern Venezuela from Washington. Do you want a puppet government controlled by Washington?”
—Venezuela President Nicolas Maduro“Before the people and nations of the world, and as constitutional president,” declaredMaduro to a crowd of red-shirted supporters gathered outside the presidential residence in Caracas, “I’ve decided to break diplomatic and political relations with the imperialist U.S. government.”

According to the Associated Press:

Maduro said in his speech the U.S. was making a “grave mistake” by trying to impose a president on Venezuela and rattled off a long list of countries — Guatemala, Brazil, Chile and Argentina—that saw leftist governments toppled or come under military rule during the Cold War with U.S. support.

In a prepared White House statement earlier in the day, Trump declaredhe was “officially recognizing the President of the Venezuelan National Assembly, Juan Guaido, as the Interim President of Venezuela.”

In addition to vowing to “use the full weight of United States economic and diplomatic power” to restore what he called “democracy” in the country, Trump also encouraged “other Western Hemisphere governments” to recognize Guaido. Shortly later, CBC News reported that Canada, led by Prime Minister Justin Trudeau, was making plans to follow Trump’s lead.

In his remarks from Caracas, Maduro told his supporters “the very existence of our Bolivarian republic” was under threat and urged them to resist “at all costs” what he explicitly described as a “coup” attempt by the “interventionist gringo empire” and the “fascist right” within his own country.

“They intend to govern Venezuela from Washington,” Maduro declared. “Do you want a puppet government controlled by Washington?”

Critics of U.S. imperialism and its long history of anti-democratic manuevers in Latin American expressed immediate alarm on Wednesday after Trump’s announcement. And what Trump identified as “democracy,” critics of the move instead used Maduro’s description: “coup.” 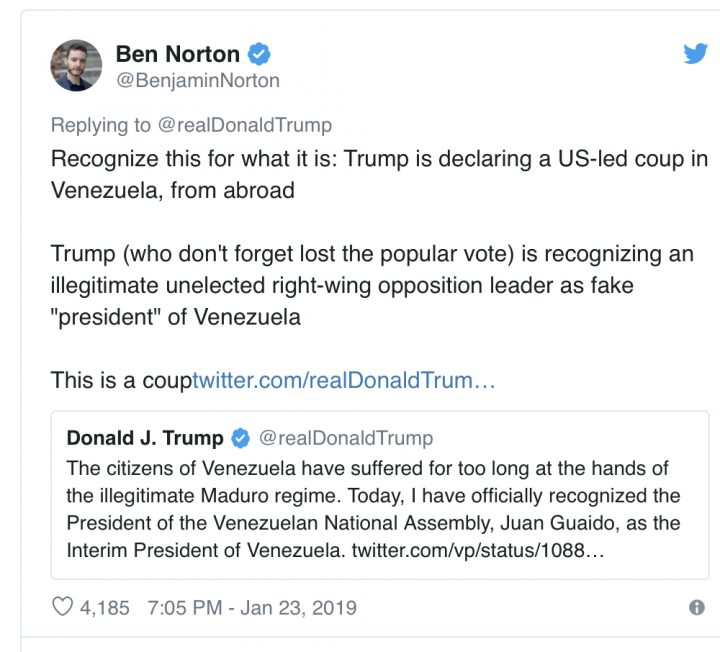 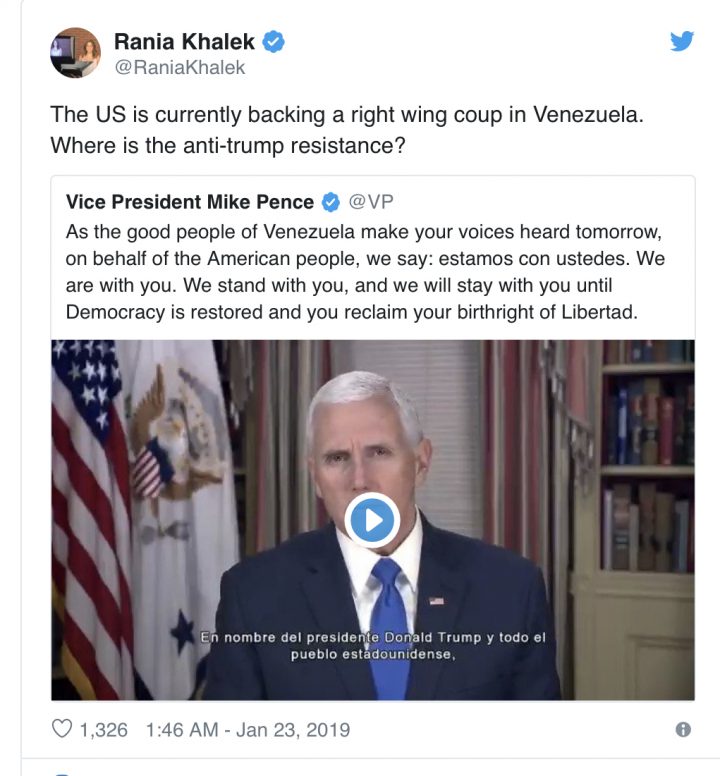 Mark Weisbrot, co-director of the Center for Economic and Policy Research (CEPR), called the latest moves by the Trump administration a “disgrace.”

While members of the U.S. foreign policy establishment, including Richard Haass of the Council on Foreign Relations, embraced Trump’s move, more progressive-minded critics pushed back: 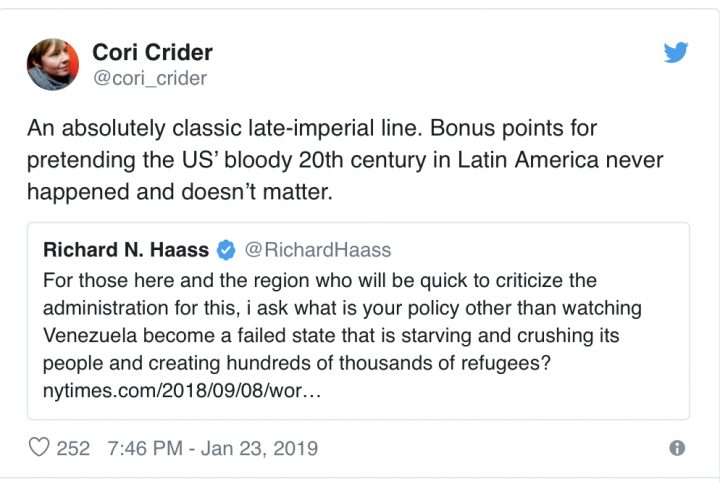 On Tuesday, U.S. Vice President Mike Pence stirred outrage of his own by issuing a statement in support of the anti-government protest movement—a gesture critics similarly viewed as an explicit effort to undermine Maduro by fomenting the nation’s right-wing to stage a coup against the socialist government.

In Facebook post on Wednesday, Dr. Francisco Dominguez, secretary of the Venezuela Solidarity Campaign, a U.K.-based campaign that backs the Bolivarian revolution and Venezuela’s right to self-determination, voiced loud objection to the U.S. vice president’s call.

“This is an outrageous violation of international law and an unacceptable interference into the affairs of a sovereign nation plus a grotesque aggression by openly calling on Venezuelans to rise up to oust the democratically elected [Maduro] government,” Dominguez said. “The U.S. has tried to oust the democratically elected government of Venezuela since 1998 and the brief April 2002 coup against Hugo Chavez had Washington fingerprints all over.”

Pointing to the history of U.S. imperialism in Latin America, including the 1973 CIA-backed coup in Chile, Dominguez said the people of the region know all too well the “horrendous results” of anti-democratic interventions by the Americans.

Naming Pence, President Donald Trump, national security advisor John Bolton, and Sen. Marco Rubio (R-Fla.) as leaders of hawkish tendencies within the U.S. government, Dominguez characterized the recent history of U.S. aggression towards Venezuela—”20 years of golpismo, economic warfare, destabilization, violence, [and] financial blockade”—as a strategy that would allow U.S.-backed interests to get their hands on the country’s “oil, gold, coltan, thorium and many other lucrative raw materials.”

In a tweet on Tuesday, Rubio warned the Maduro government it was “about to cross a line & trigger a response that believe me you are not prepared to face,” a reference to violence predicted at Wednesday planned opposition protests.

According to CEPR’s Weisbrot, the economic sanction imposed on Venezuela by the U.S. and other nations are designed to destabilize the country and have helped fuel the economic anxieties that, in part, drive the street protests and social upheaval. “The Trump sanctions on Venezuela are illegal under U.S. and international law, and they have killed many people in that country,” he explained.

Weisbrot rejected the idea that members of the administration or others pushing for regime change in Venezuela are doing so on behalf of the Venezuelan people. “Of course it goes without saying,” he concluded, “that all of these crimes and threats of violence from Pence, Trump, Rubio, etc. have nothing to do with ‘democracy.'”