In Argentina, the government of Mauricio Macri, in cahoots with large oil, mining and agro-industrial consortiums, has unleashed a ferocious and murderous assault against indigenous communities throughout the country, with the complicity of the legal system and the support of the mainstream media. The global community and international institutions must act now before the massacre spreads.

A racist state needs a violent and bestial enemy, on whose elimination depends the common good. It is the death of that demonised other — the Jew, the Muslim, the “Indian” — that breathes life into the collective, “people like us”: that is the implacable logic of modern forms of racism. On 25 November, shortly before the G20 summit is about to travel to the Patagonian resort of Bariloche, the 22 year-old builder Rafael Nahuel,was shot dead from behind, in the middle of an operation by the Prefecture (Security Services) against the Mapuche community Lafken Winkul, who are protesting to reclaim ancestral territories. The operation had been initiated by Bariloche’s federal judge, Gustavo Villanueva. The selfsame Villanueva was charged with investigating a case described as “death by dubious cause,” despite the fact that the calibre of the bullet coincides exactly with that of the machine guns used by the security forces. A few months earlier, during another raid against the Mapuche community of Lof Cushamen, coordinated by the Chief of Staff of the Ministry of the Interior, Pablo Noceti, from the ranch of Luciano Benetton, whom the Mapuche accuse of having usurped their lands, Santiago Maldonado disappeared. His lifeless body was found floating in a river months later, in suspicious circumstances. No one in the government has adequately explained why Maldonado, who could not swim, threw himself “voluntarily” into the river just as the Gendarmerie was putting down the protest.

The official response to the death of Rafael Nahuel has been even more chilling. “The benefit of the doubt always rests with the security forces,” said Vice-President Gabriela Michetti. “We do not have to prove anything,” echoed the Minister of Security, Patricia Bullrich, at the same time accusing the Mapuche of belonging to a supposed armed “terrorist” group, without proffering the slightest evidence. “For us, the version provided by the Prefecture is the truth,” she added. Even the judicial investigation found no evidence of weapons among the victims: on the contrary, everything seems to indicate that they defended themselves only with sticks and stones from an assault by shock troops, and that they were fleeing towards the forest when a bullet hit Rafael Nahuel in the back. However, a few hours later, Bullrich and her counterpart in the Ministry of Justice, Germán Garavano, congratulated themselves on the success of the mission: “The people of the south are protected and order has been restored.”

In cases of repression and death, it seems that might is right. This is the new brutal reason of state in Argentina: each victim will be a suspect. The use of colonial terminology — la gente, the “people of the south” — by the Minister is not accidental: as in the times of the conquest, the only “people”, invested with rights, are those on the side of the authorities and the transnational interests the latter defend. This cynical script has been applied too to protests from other sectors such as students and teachers, brutally beaten when demonstrating in front of Congress in protest over their salaries or when occupying schools in protest against cuts in education. In marches for the rights of women we have seen activists and reporters dragged away with uncommon violence, their cameras destroyed, and been kept incommunicado for hours, as in the days of the junta when constitutional rights had disappeared. The list of examples could go on, but it is the indigenous groups who, up to now, have suffered the greatest number of deaths, beatings, imprisonments and public humiliations, such as the Wichí and Guaraní leaders Agustín Santillán, Roberto Farías and César Arias, imprisoned in Salta and Formosa, or the elected deputy and Qulla leader Milagro Sala, held for almost two years despite numerous binding orders to release her by the UN Group against Arbitrary Detention and the Inter-American Court of Human Rights.

The government of Mauricio Macri and the mainstream Argentine media have turned racism into the dominant logic of national politics. This move cannot be understood without taking into account the history, practically uninterrupted since colonial times, of land usurpation, massacres, of holy wars and other undeclared aggressions, of victimization and discrimination against indigenous peoples, in the history of the Americas and Argentina. The current discourse regarding the supposed illegality of actions by the Mapuche ignores not only the numerous legislation and international treaties — the UN Declaration of the Rights of Indigenous Peoples UN (2007) and the Convention on Indigenous and Tribal Peoples of the International Organization of the Labor (1989) — but more fundamentally the Argentine Constitution, which in its article 75 states unequivocally the duty to “[r]ecognise the ethnic and cultural pre-existence of the Argentine indigenous peoples. […] [R]ecognise […] community ownership and ownership of the lands they traditionally occupy; and regulate the handing over of other [lands] suitable and sufficient for human development; none of them shall be alienable, transferable or susceptible to encumbrances or seizures.”

The Lords of the Land 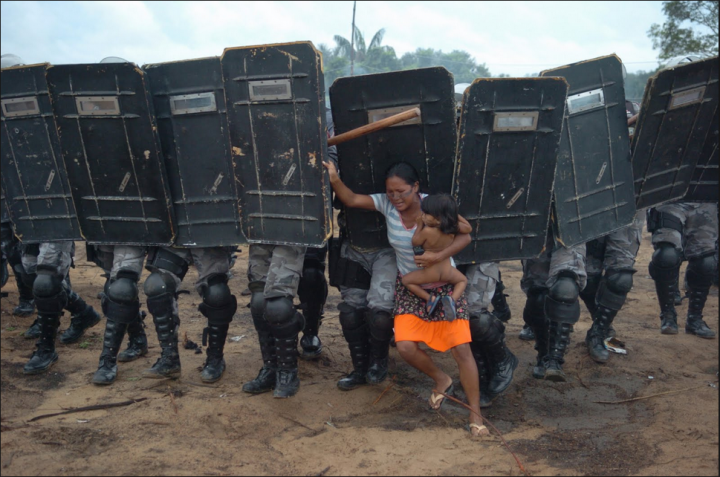 But it is not only the need to install a racist discourse, as a successful formula to mobilize the support of the urban middle classes, despite the wage cuts and galloping price rises, that today gives Argentina’s public enemy number one an indigenous face. As in all Latin America, in Argentina too we are witnessing a ferocious extractivist march on areas of high biodiversity, inhabited largely by indigenous communities, in order to access subsoil reserves of gas, oil and minerals and to create gigantic hydroelectric power plants to supply energy to the continent’s new extractive frontiers. In a few short years, Latin America has become the most dangerous region on the planet for human rights activists, especially so if one is indigenous. In Honduras, the indigenous leader Berta Cáceres was gunned down in 2016, months after receiving the prestigious Goldman Environmental Prize, at the hands of assassins in the pay of a transnational hydroelectric company and with the collaboration of political and judicial authorities. Brazil, followed by Colombia and Peru, is today the country with the most indigenous and environmental activists killed anywhere in the world, according to the NGO Global Witness: every week, an activist is murdered in the Amazon region.

Argentina is no exception to that sad rule. In Patagonia, divided into huge estates owned by a few Argentines and foreigners — the Bahamas-based Britain Joe Lewis and the American Ted Turner, the Italian Luciano Benetton — President Macri has made clear, from the start of his administration, which side he is on. On numerous occasions, travelling by official helicopter, he has vacationed at Lewis’s paradise village on the shores of Lake Escondido — public shores that are infamous because, in breach of repeated court orders, the billionaire has blocked access roads. Clearly blocking roads is more than acceptable when rich white men do it. So, just when the future of the planet is at stake in the face of catastrophic climate change, in Argentina and in much of Latin America, the most traditional landed elites have taken the reins of power: many of the ministers and senior officials in the Macri cabinet are direct descendants of the politicians and military who carried out the “Campaign of the Desert” and the extermination of indigenous peoples in the nineteenth century. Together with their European and North American partners, these new old landowners have finally resolved the contradiction in which the progressive governments in Latin America had become entangled: the tension between expanding the rule of law and the onward march of extractive industries. 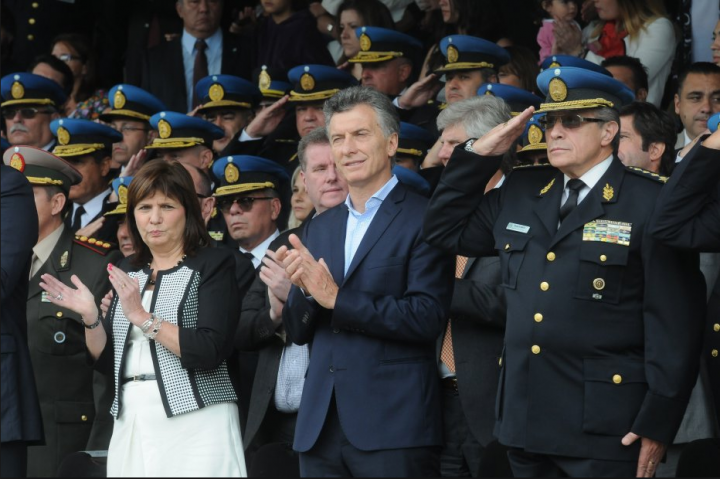 The persecution of indigenous communities is part of the systematic erosion of the human rights movement in Argentina, a movement on which the democratic pact has been based since the end of the dictatorship. The current government has turned human rights organizations into one of its most consistent enemies. No G20 country has revoked more NGO accreditations on assuming the presidency of the organisation than Argentina: according to Global Justice Now, that attack on freedom of expression “clearly showed that the Government of Mauricio Macri respects neither democracy nor pluralism.” Why this animus on the part of the government and the media powers that support it against the human rights movement? Because that movement has built and publicised cultural and legal tools to contest the mechanisms of abuse and brutality of armed forces with a long tradition of impunity and state-sponsored terrorism. The government of Macri, on the contrary, is giving increasingly explicit free rein to the armed forces, turning the repression of protest into a campaign show, and ensuring that the excesses committed during such repression have no legal consequences. For a government that seeks to project an image of “order and security” in contexts of deepening social inequality, human rights are an obstacle that must be cleared.

In today’s Argentina, where judicial independence and freedom of expression have been brutally curtailed and racist demagoguery and the criminalization of dissenting voices imperil democracy and the rule of law, it is up to us — the international community — to raise our voices in defence of the victims of neoconservative authoritarianism. From the Argentine Observatory, we express our agreement with and support for the UN Committee for the Elimination of Racial Discrimination, which has expressed its concern about forced evictions and violence committed against indigenous peoples in Argentina, and the initiative of European parliamentarians who propose suspending trade negotiations with Mercosur in response to the criminalization of the Mapuche people. During the 1978 World Cup it was the international public sphere’s role to uphold demands for truth and justice, when the military dictatorship drowned out the cries of terror victims with the distasteful pun, “Argentines are right and human.” We must not let Argentina slide once again into darkness.