A Nigerian migrant, stairs at new comers at an old, local Roman bar. Extremely polite, he asks for money. If you offer to him to buy some food instead, he immediately accepts.

Interviewed for IPS by Laurent Vercken, the young Nigerian migrant tells his story: originally from Kuje district, Southern province of Abuja, Nigeria, he has been living in Italy since the beginning of 2013 and moved to Rome shortly later.

That year, Bako docked at Lampedusa Island from Libya after a perilous sail trip through the Mediterranean Sea and a never-ending road travel through the northern African deserts, that began in Abuja, Nigeria.

The eldest of a large family of 4 brothers and 2 sisters, Bako decided to take on him the medical expenses of his father who suffers deep-vein thrombosis affecting his right arm.

So, at the early age of 20 the young man grabbed his ID card, all the money needed for the very long and arduous, unknown trip north and left the place where he was born and where he had lived until that moment: the village of Kuje, in the Southern district of the Nigerian capital city.

“After several days spent in the Lampedusa transit camp, I managed to get to the big Italian city of Rome early in the 2013 summer, hoping for a better chance to find a job and a regular residence permit, which he finally obtained in 2015 with a validity of only one year.” 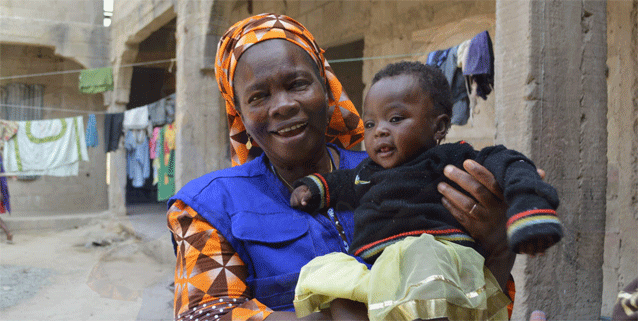 Martha, a former pediatric nurse, travels around northeast Nigeria as part of IOM’s mental health teams. She offers counseling and workshops for adults, and runs games for children. Credit: IOM

Now nearly five years after Bako had the courage to leave his home country, he has still not found a decent job to contribute financially to help his family and ensure their livelihood.

The first residence permit granted to him by the Italian Government expired in 2016.

However, Bako is still longing for a better future, trying to survive the long days, accepting small jobs of gardening or cheap casual labour while still asking for money outside a local bar on a busy street of a European capital city, which also saw a lot of its own citizens migrate in the same search for a better future.

Like most Nigerian migrants, Bako is an honest, hard worker, willing to find a decent job, no matter what kind, to help him survive and send as much money as possible to his large family and, above all, cover his father’s expensive medical treatment.

Another Nigerian migrant, Kingsley* (35), has had better luck. “I am happy now! Three years ago, I managed to reach Italy after a long, really dangerous voyage through Morocco and then Spain,” he tells IPS.

After two long years of working as an undocumented summer fruits collector, loader at a small moving company, street vendor of CDs and handicrafts, among other jobs, Kingsley married an Italian young woman and they now have two children and, most importantly, a permanent resident permit.

Bako and Kingsley are just two of tens of thousands of Nigerian migrants trying for better luck in Italy.

Being males, they consider themselves lucky.

According to credible Italian sources, around 50 per cent of Nigerian migrant women and girls –in Rome in particular and in Italy in general–, are forced by smugglers and human traffickers to work as sex slaves

“I know of a girl, really a baby (14 years) who has been forced to sleep with more than 20 men a day… every day,” says to IPS Esther* who has also been obliged by her raptors to work as a prostitute in Rome’s outskirts.

Joy* approaches IPS with a mix of fear that she might be reported to Italian police for being an undocumented migrant working as a prostitute, and also some hope that she could be helped to escape prostitution.

“We have being victims of many peoples: first those who convinced us in Nigeria that they would take us to Europe, safely, and find a decent job here,” she tells. “They took us with tens of other migrants in a horrible voyage to Libya.” See Migrants – The Increasingly Expensive Deadly Voyages

“There, many of us women and girls have been victims of brutal, inhumane sexual abuse on the hands of smugglers and traffickers who would sell many of us to nationals to abuse of us,” adds Joy*. See: Millions of Women and Children for Sale for Sex, Slavery, Organs…

Esther and Joy’s cases are not unique. Their plights have been documented and denounced by international humanitarian organisations and the United Nations bodies. See: African Migrant Women Face “Shocking Sexual Abuse” on Journey to Europe

Nor are theirs just a couple of isolated cases affecting migrants from their home country.

It is in fact estimated that around 51 per cent of migrants worldwide are women and girls, according to a report by the International Organization for Migration (IOM) in Italy: La Tratta di essere umani atrraversola rotta del Mediterraneo centrale” (Trafficking in human beings through the central Mediterranean route).

In the case of women, it adds, exploitation and abuse are above all sexual, representing 72 per cent of all cases, followed by labour exploitation (20 per cent).

It also estimates that around 80 per cent of Nigerian migrants arrived to Italy by sea in 2016 have been victims of trafficking for sexual exploitation either in Italy or in other European Union countries. Nigerian migrants women and unaccompanied children are among those at highest risk of falling prey to smugglers and traffickers.

“We had nothing in Nigeria – no house, no food,” explained 21-year-old Oluchi*, who together with her husband and mother decided to travel to Italy. Oluchi and her family were arrested and jailed in Libya, IOM quoted as an example.

Now, she was returning home with her son to Nigeria. “The dream of Europe is actually a nightmare,” she said.

So far in 2017, IOM Libya helped 589 stranded migrants return to their countries of origin, of whom 117 were eligible for reintegration assistance.

Difficult question, if you only consider the fact that eight years of Boko Haram violence has forced more than 1.8 million people from their homes, leaving belongings, communities and lives behind across Nigeria’s North East.

The United Nations estimated that Boko Haram has abducted at least 4,000 girls and women in Northeast Nigeria, far exceeding the nearly 300 girls taken from their school in Chibok in 2014, sparking the UN viral #BringBackOurGirls campaign and drawing attention to the conflict.

Many say they were forced to witness killing or suffered sexual violence, the UN migration agency reports, adding that Boko Haram has also used children as suicide bombers and has forcibly recruited countless boys and men to commit violent acts.

To get a wider picture, also consider the rising social inequalities and the high youth unemployment rates in this oil-rich country of around 130 million inhabitants. Two facts that by the way are common to several other African countries who additionally suffer severe impact of climate change and man-made disasters that they have not caused.

*All migrants’ names have been changed to protect their identity.

Baher Kamal
Baher Kamal, Egyptian-born, Spanish national secular journalist. He is founder and publisher of Human Wrongs Watch Kamal is a pro-peace, non-violence, human rights, harmonious coexistence defender among human beings and with Nature, with more than 43 years of professional experience. With these issues in sight, he covered practically all professional posts, from correspondent to chief editor of dailies and international news agencies. human-wrongs-watch.net