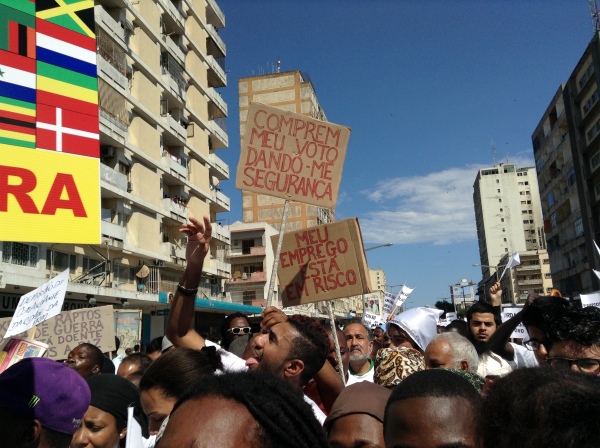 The victory of Filipe Nyusi and the Mozambique Liberation Front (Frelimo) in the October 15 presidential and parliamentary elections pours cold water on the hopes of many who were convinced that 2014 would bring political change to Mozambique.

Instead, Frelimo will maintain its stranglehold on political power for another five years, with an absolute majority in parliament.

Accredited observers, independent reports and the media documented numerous breakdowns of transparency and fairness in the recent electoral process. But none of this appeared to be reason enough for the Electoral Commission and Constitutional Council to nullify the elections and call for re-run, or even to investigate with the intention of improving the electoral process. These two institutions are accused of serving only to keep the ruling party in power by validating the flawed electoral outcomes.

The same political party has ruled the country since its independence in 1975. One Frelimo leader, Alberto Chipande, recently stated publicly that “Frelimo plans to rule for the next 50 years”. In other words, no matter what the will of the people, Mozambicans will have to forget about change in power for at least another half a century.

We have recently witnessed an increase in popular discontent, mainly in urban areas. This led some analysts to predict Frelimo’s fall from the throne of power. However, this has not happened. Frelimo and its political dictatorship prevail.

The newly elected president, Filipe Nyusi takes over a country in a dire economic and sociopolitical situation. The economy is growing fast, as evidenced by rising GDP and increased flows of foreign direct investment into Mozambique. This is juxtaposed, however, against increasing poverty amongst the population – a stone in Nyusi’s shoe that could hobble his presidency.

On the political front, the Mozambique Government and National Resistance of Mozambique (Renamo) are negotiating the integration of the latter’s armed guerrillas into the national army and police. This integration has recently been stalled by the fallout between Frelimo and Renamo, which led to several months of armed conflict in different parts of the country. In Sofala province, the Renamo rebels’ attacks have caused nervousness and uncertainty among international investors in the nation’s coal, gas and other mineral sectors.

Although many of Renamo’s demands in the negotiations have now been met, it doesn’t look like this political impasse will easily be broken.

An unprecedented awakening within the social movements has been the result. Filipe Nyusi will lead a country that has a stronger civil society that has been critical about the development model and Mozambique political situation, and at times has mobilised the public to protest against the government.

The emergence of new restless social movements in rural and urban areas is highly likely. Political consciousness has greatly increased among the urban population, as has that of watchdog groups in many sectors of the society.

So the new president will have to deal with a more confrontational civil society that will question his actions as well as his political and economical choices – indeed, that will challenge his presidency as a whole. It will be interesting to see how he will respond. Will he regard this as a normal phenomenon in a country consolidating its democracy and sense of citizenship, or as a challenge to his tenure that must be squashed?

Nyusi’s predecessor, Armando Guebuza, preferred to undermine popular discontent and label those who questioned his choices as prophets of doom.

Nyusi will have to deal with serious allegations on the part of civil society and some intellectuals, who decry the re-emergence of neocolonialism in the country in the form of investment by multinational corporations and foreign governments. Such investment has dispossessed and displaced poor and vulnerable communities in areas such as Central Tete province, as was the case with Brazilian giant Vale, with Rio Tinto, and with other companies.

It should be noted that this phenomenon emerged gradually during the post-civil war government of Joaquim Chissano, but it worsened after Armando Guebuza came to power in 2005.

Guebuza is seen as one of the strongest men in the neoliberal wing of Frelimo, which seems to be growing and overshadowing the party’s more conservative wing. The new president seems to be a competent disciple of Guebuza, who in turn appears to trust Nyusi and supported his presidential candidacy.

Satisfy voters or obey the boss?

In fact, some analysts consider Nyusi to be a pawn of outgoing president Guebuza, who is also the current president of Frelimo. They think that he will obey the ‘boss’, lacking sufficient power to chart his own course. Anne Fruhauf, an analyst at Teneo Intelligence once said that “Nyusi’s election would strengthen Guebuza’s ability to influence policy until at least 2017”.

Others have been more cautious and called for people to reserve judgment over Nyusi’s leadership, arguing that he presents an opportunity for new ideas, inspired by the youth, because he does not belong to Guebuza’s generation.

Unfortunately, the young Nyusi may not have enough power to reverse the rot of corruption and dictatorial tendencies within Frelimo. Optimists may have been mesmerised by his campaign speeches, in which he made promises and emphasized ideals and ethics.

Many of Nyusi’s campaign messages identified with the poor and weak sectors of the society, promising inclusive governance. But it would not be surprising if, once in office, he defends ‘pragmatism’ and the supremacy of markets – just like his predecessors.

Compared with neighbours like South Africa, Mozambique has a weak political opposition. Despite the fact that Afonso Dlakhama’s party, Renamo, has repositioned itself as the main opposition party – a force not to be taken for lightly – there is a clear political vacuum in terms of multi-party democracy.

The recent emergence of the Mozambique Democratic Movement (MDM), considered the third political opposition in terms of electorate support base, is seen by some as offering an alternative in Mozambique politics.

It is necessary to analyse the meaning of political alternatives here, and an analogy from the field of media may shed light. Having a new TV or radio channel, or a new newspaper, does not mean one has alternative media. In order to represent an ‘alternative’, a new channel has to differ from the mainstream in many dimensions: content, aesthetic, modes of production, modes of distribution and audience relations. Most importantly, it should challenge existing power and represent marginalised groups.

‘Alternative’ should not mean merely additional choices of fixed, mutually exclusive options, but adding political dynamism, bringing vibrancy to the political arena. This opens space to further democracy and opportunity to build equality, socially and economically.

Mozambique lacks a significant political opposition that could deliver this dynamism – that defends and stands for an alternate development model or political system, inclined to the left. Opposition parties seem merely to say they will be less corrupt than the ruling party. During electoral campaign, even Frelimo candidates used some leftist language to canvass support among the electorate. This is not new because political elites are used to talking left but walking right.

No one is promising to stop the looting of the national wealth.

Formation of new political parties will not fill the political vacuum that exists. For genuine alternatives, we must look to social movements.

Although formal political opposition parties are essential, a country like Mozambique needs strong social movements, since these are the only forces that can carry out real social mobilisation (or demobilisation) to control and challenge the regime and political party’s monopolies of representation.

If well organised and articulated, peasants’ movements, unions, unemployed movements and the urban and rural poor will press for more participation in decision-making and a more positive application of democratic rights.

In recent years there have been several manifestations of resistance to and rejection of land grabbing, as well as the applied ‘development’ model by civil society organisations in some major cities and popular uprisings in some rural areas.

For example, the Mozambique Union of Farmers (União Nacional de Camponeses, UNAC) is leading a national campaign to halt ProSavana, an agribusiness mega project led by Japan and Brazil for agricultural development in Northern Mozambique. UNAC sees ProSavana as an inefficient development model.

Such manifestations, if well articulated between movements, will make meaningful democratic impacts and will contribute to filling in the clearly existing political vacuum in the nation of Samora Machel.